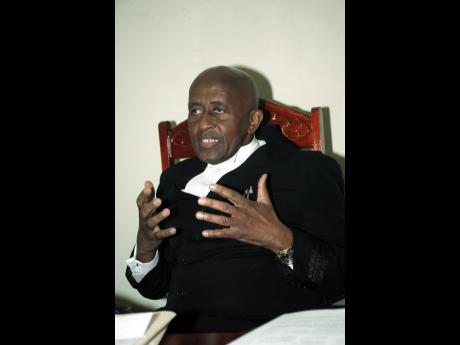 The just-completed general election has resulted in the closest seat counts we have had. At the moment, the count is 32 for the victorious Jamaica Labour Party (JLP) and 31 for the People's National Party (PNP).

The successful party will elevate one of its members to the chair of the speaker of the House, leaving 31 of its members on the floor of the Parliament. Thus, both the Jamaica Labour Party and the People's National Party will have the same number of members. The first problem with this situation is that the speaker may have to cast his vote into the arena too often to resolve a gridlock.

The speaker, at least in theory, is supposed to be impartial. He should enter the arena of voting only on very rare and exceptional occasions. His intervention in the voting process is not expected to be routine. However, a Parliament with both the governing party and the opposition party having the same number of members may see the speaker of the House becoming involved in the voting process more frequently than is desirable.

No vast difference between parties

The close result in seat count between the two parties should be seen as an acknowledgement by the electorate that there is no vast difference between the JLP and the PNP.

The low turnout of electors, a little under 48 per cent, should also be seen as a sign that the electorate does not find much difference between the two parties and therefore the majority of electors who did not vote stayed away as they could find no acceptable grounds to choose one party as against the other.

The close seat count will make Prime Minister-designate Andrew Holness vulnerable in a number of ways. His administration can be kicked out of Government by two members of his party crossing the floor. Thus, Mr Holness will have to find a way to please every member of his party in Parliament. He will have to take steps to deal with any potential for dissent in the ranks of his members.

The fact that the parties hold almost the same number of seats in Parliament can make for a strong and vibrant Parliament. We could see some of the best parliamentary debates and presentations should the respective parties use their several members wisely from the preparation stage to the presentation stage. We should also see a higher level of punctuality, as absence of even one member can give the opposite side a huge advantage, especially where a matter being voted on requires only a simple majority.

It is now obvious that the JLP was able to eke out a victory because enough of the electorates bought into the 10-Point Plan, including doubling the minimum wage and setting the threshold for income tax liability above $1.5 million per year.

The PNP went into the election overconfident and with a belief that irrespective of what the JLP did, the People's National Party would win the election. Much time was spent quarrelling about Andrew Holness' 'big house' and giving the impression that Mr Holness did something wrong. The fact of the matter is that it is not a crime nor in any way unlawful to build a big house.

Since the People's National Party had no information or evidence of wrongdoing by Mr Holness, they should not have spent so much time attacking his house. In the end, it came across as spite and envy rather than as a matter that should be considered by an electorate.

In the same breath, the reasons given by the PNP for not participating in the national debate are some of the most valid reasons why they should have participated. What better opportunity was there than during a national debate to blast an opponent who you have accused of being disrespectful to you?

Finally, Andrew Holness should look at the option of calling a snap election before the end of the year in an effort to secure more parliamentary seats and break the gridlock which he will face in Parliament. He has to do this before the PNP regroups and strengthens. It will be a risky decision, but it will be a greater risk for him to wait longer or give the PNP time to recover.

We are in for some interesting times in the political field. Each party will now have to bring to the fore the best tactics and strategies that they can engage to get the better of the other party. Let us wait and see.