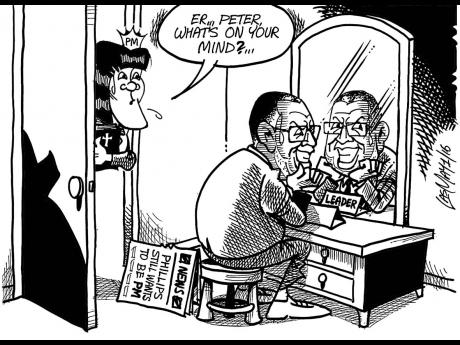 There is a certain sameness about the swearing in of a new prime minister and his speech inspiring hope and promising transparency and a new engagement with our people.

Were we all societal neophytes, we would be more moved by the emotion invoked in the speech than by practical considerations of whatever are the realities holding us back. But many of us have been here before and so have we been in that place holding the ghosts of hope committed too early to a dark and dreary graveyard.

As I watched and listened to new Prime Minister Andrew Holness, I also saw him seated with the new Opposition Leader Portia Simpson Miller, I allowed myself another opportunity to believe in the investment of faith in a new political administration.

The day after I watched and listened to Bruce Golding being sworn in and delivering his own message of hope and inspiration in 2007, I called a JLP MP and suggested that Golding had the opportunity to be one of the best prime ministers this country had seen.

A few years later, as a set of tragic consequences and foolish political judgements led to his resignation, I fell back into the slot of believing in little politically and expecting even less.

Andrew Holness comes to his new post with a mandate personally carved out by him. Unlike in late 2011 when he was suddenly thrown into the deep end of the pool, this time around he cannot make the claim that he is a poor swimmer.

Just about every Jamaican has been struck by the fact that JLP internal funds have been used to pay for a ceremony that would normally be paid for by taxpayers. With this out-of-the-box approach, Holness has sent another signal that the JLP administration will be serious about government waste.

By getting the JLP to pick up the tab for the ceremony because, as he implied, the country has real economic concerns of the moment, he has grabbed the attention of more people than he had on election day.

Like all swearing-in ceremonies, it was attended by party fans at all levels, those who were genuine well-wishers, those craving photo ops, and even some hoping that at some space in the mechanics of the JLP administration a desk and an office will present itself to enhance their personal economic well-being.

If the early signals are anything to go by, many are going to be disappointed. By now, of course, the new PM would have spoken to those he will be selecting for key Cabinet assignments. If the camaraderie sensed between the PM and the opposition leader is anything to go by, we may just have entered the realm of constructive opposition instead of opposition by obstruction.
Based on the fact that the opposition leader had stressed the importance of the new government operating within guidelines that do nothing to derail the present IMF agreement, it seems to me that cooperation by the Opposition is a logical offshoot of that.

Diehards on both sides of the political fence have been finding that the practice of lavish praise on one side and hoping for early doom coming from the losing side is not as popular as it once was.

To the extent that social media is reflective of wide swathes of the society, there are holdouts who still find that wishing the JLP fails on one hand, and on the other making fun of their PNP friends, provides them a certain sick joy. At another level, it has taken on much more than what was expected.

As I understand it, a losing MP has not been handling his loss very well. Prior to the election, he gave out cash to known centres of influence who were expected to use the funds to assist in getting a sizable chunk of his supporters to the voting booth.

The votes did not materialise. In other cases he gave out goats, chickens and zinc sheets for roofing. After his devastating loss, persons unknown to him but who were themselves vexed at the loss took it on themselves to go back to some of those who had received ‘enhancements’.

They took back the goats, the chickens and men ripped off sections of roofing that was newly covered in zinc sheeting.

There is no doubt that diehard PNP supporters are just as despondent as is PNP party central. The admission by embattled PNP Gen Sec Paul Burke that Portia did not want to call an early election indicates that she was not entirely in charge of proceedings.

Was she shown poll results that placed the JLP as gaining more in support than the PNP and like the ruling JLP in early 1989, the election was called early to stave off the loss of additional seats?

In other words, was she convinced to risk a close-shave win/loss in an early election instead of, say, an August 2016 election where the PNP would have lost much more? For now we do not know, but I can well understand the level of blame and counterblame inside the PNP.

The PNP cannot allow the loss to detract from the need to bring back life to the party structure. It knows that although the Holness-led JLP will be concentrating on governance and the immediate socio-economic alternatives available to it, the party will need a very active committee exploring and planning for local government elections.

It is likely that the PNP’s despondency will not allow it to regroup anytime soon - in that it may be prepared to let the party bottom out over the next few months and cede the local government elections to the JLP.

In any event, even if the PNP regroups, I do not think the election operatives are psychologically prepared to deal with elections in the next six months. It will be a losing team that will be formed.

Many political pundits and others right across Jamaica share the view that the close win is a meritorious mark for Jamaica’s democracy. While I concur with that view, the reality of a political loss far exceeds the JLP’s one-seat win.

There are no second prizes in our system of winner takes all. The first to suffer is the political structure. Those in leadership positions are despondent while community activists and party workers have gone on leave. The spirit needed to participate is absent.

Then there is the reality of those who were supported by the governmental structure, the political appointees. PNP MPs who lost their seats will now have to concentrate on their private pursuits to earn a living.

Faux politicians who found happiness at board level should have been the PNP centres of influence into the wider society, but the power wielded would often transform them into those insulated from society. That cohort will take the loss hard.

The leadership of the PNP is at this minute being questioned, but no one is prepared to openly call out party President Portia Simpson Miller. For better or for worse, the PNP has taken the high ground and the early presumptions are that the election losses were a collective weakness and not the fault of the party leader.

With all of that, there are those inside the PNP who know that the leadership makeup of the team on the morning of February 25 cannot be the team to go forward in the immediate tomorrows of the PNP’s future.

The ideal scenario has been rudely shattered. That vision saw Portia winning and a seamless leadership transition to Peter Phillips later in the year. Now Portia must recognise that she is part of that faded morning glory of February 25.

The year is still young and it could have some rather unpleasant surprises that are not really surprises. Once the prime minister has chosen his Cabinet, I expect that in consultation with the IMF and the permanent secretaries of the various ministries, he will make a speech in which the real state of the nation is spelled out in plain terms.

Depending on the items flagged as ‘unpleasant’, Peter Phillips may find that it may be worth his while to stick around a little longer.

He may be seen as a better choice than Portia for the Young Turks in the PNP to gather around to take the party into its interim stage of development. Certainly, men of the likes of Raymond Pryce and Damion Crawford and women like Lisa Hanna and Imani Duncan-Price, if they have the stomach for a longer haul, will want to clutch at the best catalyst for their development.

The PNP will be down for a while, but it cannot afford to be out. Those of us who mean Jamaica well will congratulate the JLP and commiserate with the PNP.

But we are also forced to add that the PNP made some unforced errors during the election campaign. Any team going forward must admit the folly of that foolish game.

Mark Wignall is a  political analyst. Email feedback to columns@gleanerjm.com and observemark@gmail.com.