Editorial: The manufacturing of Donald Trump 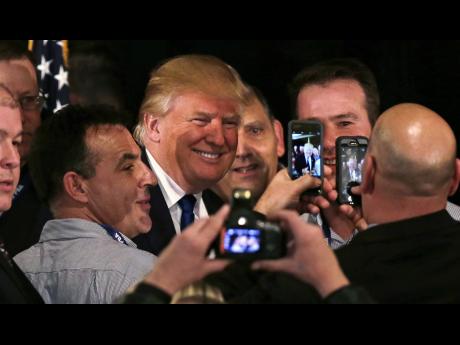 AP
Donald Trump poses for pictures on the campaign trail.

By the end of today's primaries in the states of Florida, Ohio, Illinois, North Carolina, and Missouri, Donald Trump will, possibly, to the chagrin of the Republican Establishment, have transcended front-runner status to become his party's presumptive candidate for America's presidency in November.

For, having won 14 of the 22 Republican primaries and caucuses thus far, Mr Trump may be well on his way to sealing his candidacy. In the event, it will have become clear that the wheels have all but fallen off the stop-Trump wagon. Even if he doesn't have a clear majority of delegates required for the nomination, a brokered convention and the selection of someone other than Trump now seem out of the question.

People in Jamaica and elsewhere in the world will, with good reason, be astounded at the rise of Donald Trump a mere seven years after Americans elected Barack Obama as the country's first African-American president. Mr Trump brings to his candidacy the legitimacy of being a real-estate billionaire, a reality-TV star, and a pitchman who has lent his name to products.

But his primary political action, prior to now, was being a so-called 'birther' - those on the Right who questioned Mr Obama's American citizenship and, therefore, the legitimacy of his presidency. His campaign has been even more toxically febrile.

Among other things, Donald Trump has been xenophobic, bigoted, and misogynistic, and has shown himself ignorant of global affairs. He described Mexican immigrants as murderers and rapists; said that he would build a border wall between the United States and Mexico, for which the Mexicans would pay; threatened a temporary ban of entry to the United States of all Muslims as part of his fight against radical Islam; and supported the use of torture in the interrogation of terror suspects. Moreover, he has been generally bellicose in his language about America's competitors, whether in trade or geopolitically.

Donald Trump, and his success in this campaign, is often explained as a response to what Americans perceive as 'broken Washington' and a declining United States, the latter epitomised by the rise of other countries, especially China. So, Mr Trump's refrain is that he will "make America great again".

It is, in some respects, the same anger into which the Democratic Party's Bernie Sanders on the Left has tapped with his spiels against Wall Street and for the building of socialism. Both have strong white working-class support. But Mr Sanders' prescriptions are founded in ideas and the mobilisation of a broad coalition to give effect to democratic socialism.

From our distance and perspective, Mr Trump appears to traffic in unchannelled and narcissistic self-belief. With a splintered Republican field, he has done well in galvanising about 40 per cent of the party's base to his cause. But with nearly 90 per cent of African-Americans and three-quarters of Latinos inveighing against Mr Trump, his path to the White House seems fraught with uncertainty. Hence the hand-wringing within the Republican Establishment.

In responding to the dilemma of Donald Trump, the Republicans miss a point: He didn't just happen.

He is the product of a two-decade growth of anti-intellectualism on the American Right and in their party, exemplified, among other things, by their support of the extremes of the Tea Party movement; the embraced pontification of the Rush Limbaughs of America; and the movement to delegitimise President Obama, with its manufactured gridlock in Washington.