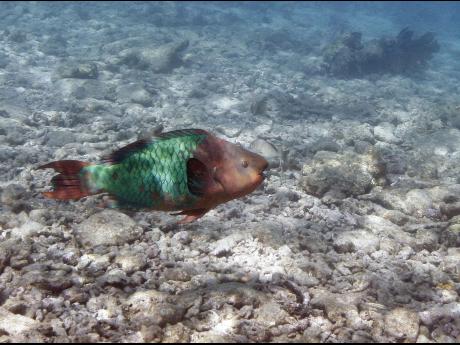 AP
In this August 16, 2008 file photo, a parrotfish is shown swimming over a dead coral reef in the Florida Keys National Marine Sanctuary near Key West, Florida. Fish sanctuaries have had the positive effect on a rise in population of parrotfish and other species in Jamaican waters. 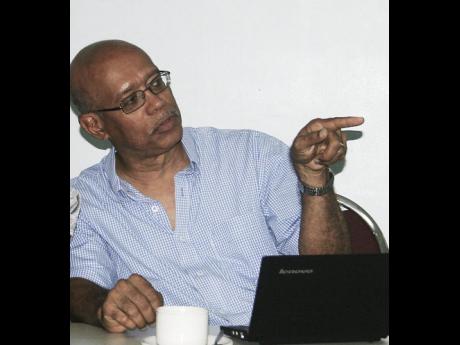 Once upon a time, Jamaica was the poster boy for overfishing, and though things are still not perfect, a quiet successful effort in fisheries restoration in the form of fish sanctuaries is one of the very positive developments in fisheries management these days.

So, what is a fish sanctuary, anyway? It is an area of the coastline that has been set aside as a specially protected area where no fishing is allowed, either permanently or for a specific period.

So how do they work?

If properly enforced, such an area is able to produce, over time, numbers of mature fish and other commercially valuable species that reproduce, and their eggs and larval stages drift over to other adjoining areas and grow to sizes where they, in turn, can be caught by fishers. These fishers, therefore, benefit from the presence of the fish sanctuaries next door.

So when did they start?

Jamaica has actually had two tiny paper fish sanctuaries from around 1977, but these were not properly enforced, as their importance was not recognised at the time. Around the world, especially since around the 1990s, the world has been gripped by declining fisheries everywhere, but also the desire to restore them.

So, some trial fishery reserves (another name for fish sanctuaries) were introduced in the Philippines. After a few years, fishers there reported that catches near the protected areas were increasing. Scientists carefully verified that this was, in fact, the case. Word of their success quickly spread around the Pacific, and many countries began to introduce them to see if they, too, could benefit from them even in some small way.

So what about the Caribbean?

Well, one of the first regional fish sanctuaries was the one introduced in the 1990s in St Lucia called the Soufriere Fish Sanctuary. This has been very successful over a relatively short period of just a few years. Significant increases in the numbers of all types of reef fishes were reported by fishers around the sanctuary where formerly there was not much to catch. This is the whole point of how it is that they work. Once an area is rested from fishing, the fishable resources quickly begin to recover.

So good enforcement alone is the key?

It is the greatest factor for success, but a number of others, such as the correct selection of a suitable area that has no major pollution, reasonably healthy coral reefs, and the assignment of a group of responsible persons to operate the fish sanctuary, are also vital. Regionally, there is a great number of sanctuaries all over the Greater Caribbean and, in fact, Jamaica started to introduce them, comparatively speaking, long after other our neighbouring nations did so.

So which fish sanctuaries do we have here in Jamaica? In 2017, there is a total of 16 sanctuaries around the island, and we will mention some of them here. Three of the largest ones are in Old Harbour Bay, and, like most sanctuaries, were declared in 2010 and are managed by the Caribbean Coastal Area Management Foundation (CCAMF). Others include Galleon Bay sanctuary, St Elizabeth, run by the BREDS organisation; Bluefields in Westmoreland; and Orange Bay, Hanover, which is managed by the Negril Reef Protection Trust; part of the Montego Bay Marine Park, in St James; the Discovery Bay fish sanctuary run by the University of the West Indies Marine Lab in St Ann; and the Sandals Boscobel sanctuary in St Mary.

This last one is a good example of successful cooperation with the private sector and the Government of Jamaica. The Sandals Group of hotels also has another small sanctuary around its Whitehouse hotel in Westmoreland.

Special mention must be made of the Oracabessa fish sanctuary in St Mary, which continues to do very well, and then the latest in the series of reserves, the Alligator Head sanctuary in San San, Portland, introduced in 2016.

So what about offshore areas?

Well, there is a very small sanctuary around one of the three cays on Pedro Bank called Southeast Cay, also known as Bird Cay because the presence of large numbers of nesting seabirds all year. There are plans to greatly increase the size of this particular one because of the importance of Pedro Bank to fisheries as a whole, and to queen conch in particular.

As mentioned earlier, Oracabessa fish sanctuary has been a particularly well-studied and spectacularly successful one. In a series of scientific surveys since its declaration in 2011, the numbers of parrotfishes has increased by at least six times, doctorfishes by nearly 10 times, and several important fish types such as groupers, which were wholly missing when it was started, have begun to reappear.

Additionally, the amount of live coral has slowly increased because the parrot and doctorfishes have now once again been consuming the algae and seaweeds that used to overgrow, shade out and smother the corals on the reef.

These are big positives for Oracabessa, and for the adjoining Boscobel sanctuary, as well as almost every other sanctuary, too. The Oracabessa sanctuary has now noted an increase in the number of visitors who arrive to have a look at the large numbers of fishes there, versus other areas on the north coast with good reefs but no fish at all around them to see. Therefore, the sanctuaries have great value in the tourism sector. Tourism ministry, are you getting this?

The government office responsible for them is the Fisheries Division of the Ministry of Industry, Commerce, Agriculture and Fisheries, and if persons or groups are interested in having a particular area of coastline assessed as a potential fish sanctuary, they are advised to contact them. It must be understood that not all areas will be able to make suitable fish sanctuaries, as there are several important criteria to be satisfied, and most important, even after may be considered suitable, it will not be approved unless there is an appropriate group to manage the area into the future.

So how does the future for fish sanctuaries look? Quite encouraging, generally, as persons here are seeing that they do work and in a relatively short period of a few years with good enforcement, too.

Fish sanctuaries,it must be clearly stated, are not a panacea for the ills of the reef fishery here, and thorny issues such as widespread spearfishing of small fishes, increasing coastal pollution, and continuing use of small-meshed beach seines that destroy millions of baby fish annually are serious problems that are not easily solved.

Fish sanctuaries, however, are definitely one of the strongly positive ways forward in Jamaica, and we must continue to enforce them and to carefully introduce others all around our island. Marine scientists from the UWI, Mona, continue to work hand in hand with the Government, as well as the private sector, both to advise on, and to guide, the introduction of these protected marine areas for the benefit of the nation.