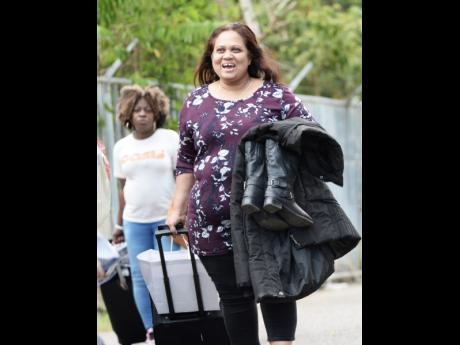 Jermaine Barnaby
Jermaine Barnaby/Freelance Photographer A Jamaican who was returned by the United Kingdom government leaves the Mobile Reserve headquarters in Kingston on March 8.

Deportees (Things Change) is the product of the lyrical ingenuity and extraordinary talent of Mark Myrie, otherwise known as Buju Banton. It provides an interesting narrative of the bounded rational choices that some Jamaican migrants made which led to their involuntary removal from overseas jurisdictions and the challenges they face upon re-entering Jamaican society.

However, offenders who are wise enough to put into place plans to ensure their survival upon removal are also likely to be affected by deportee-related stigma. Stigmatisation can be extremely disabling, sometimes even resulting in the exclusion of persons who are talented.

For many involuntary removed migrants (IRMs), dusting off and starting from scratch, while not impossible, is extremely difficult because of various challenges, including:

- Having to overcome the trauma of the removal process, which at times can be lengthy;

- Insolvency resulting from the legal fees of seeking to appeal one's removal;

- Coming to terms with not having any familial ties to Jamaica, and the extended separation from one's family left behind;

- Not being able to lead productive lives because of mental disability and having limited access to appropriate treatment upon returning to Jamaican society;

- Not having sufficient or any knowledge of the 'facilitative return scheme' in order to make an informed decision before rejecting it or to simply apply and benefit from this kind of financial assistance when it is available; and

- Being excluded from gainful employment because of one's criminal record or the unexplained and significant gaps in one's curriculum vitae.

Additionally, homeless women and children requiring emergency shelter services will now have to seek refuge at the Open Arms Drop-in Centre located at the Bellevue Hospital premises, or the Open Heart Charitable Mission in Montego Bay because Hibiscus Jamaica Limited has closed its doors.

However, even places of refuge that seem to be surviving in an age of austerity can experience strain, resulting from overcrowding. The challenges that IRMs face at re-entry are, therefore, quite complex.

Moreover, it is easier to be identified as a 'criminal' than to prove oneself to be rehabilitated, which might explain why it is sometimes overlooked that not all IRMs are deportees. This is an important distinction Professor Bernard Headley, who is a retired criminologist, and co-founder of the National Organisation of Deported Migrants, underscores in his work.

Deportation is usually reserved for serious/violent foreign national offenders (FNOs), though both deportation and administrative removal are tools for immigration control. For example, a deportation order made in the UK under the Immigration Act of 1971 sanctions detention pending removal usually of FNOs over age 17 who have been convicted of an offence that is punishable with imprisonment or whose deportation is otherwise deemed by the secretary of state to be conducive to the public good.

FNOs may be liable to administrative removal, under Section 10 of the Immigration and Asylum Act 1999, usually for offences related to failure to comply with conditions of leave to enter or remain in the UK, the use of deception to obtain leave to remain or being the spouse, civil partner and/or child under age 18 of a FNO in respect of whom removal directions have been given.

Therefore, partners and children of FNOs may also be removed, even though they may not have been complicit. This suggests that upon returning to Jamaica, they, too, may fall victim to deportee-related stigma, even though they were not deported.

Let us be mindful of this distinction, and not be the ones to 'cast the first stone'. This is 'fi wi' Jamaica, and together we can bring transformation.