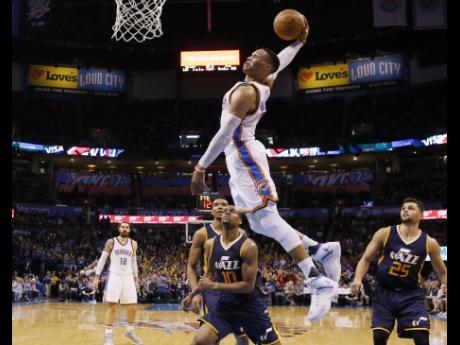 Who will win the 2016-2017 MVP award for the regular season in the NBA may well be the most intriguing question in all of sports at the moment. Russell Westbrook and James Harden are the front runners at the moment, but legitimate cases can be made for both LeBron James and Kawhi Leonard. While LeBron and Kawhi are in the conversation, neither of them will win.

It's interesting that both Lebron and Kawhi are regarded as the best 'two-way' players in the league, yet neither will win the regular-season award. I keep hearing that 'defence wins championship' in basketball, yet, for years, the regular-season MVP has been usually reserved for a player of great offensive qualities.

Westbrook is the front runner. He is averaging a league-high 31.9 points per game. He is 10.4 assists per game and also dragging down 10.7 rebounds. His triple double average is a record-breaking achievement that may just tilt the balance in his favour.

There is also a sentimental attachment to Westbrook from neutral fans. After his long-time teammate Kevin Durrant left for greener pastures, it was admirable to see how Westbrook took it upon himself to take his team to the playoffs without Durrant. Most of us felt Durrant bailed on him and we were silently rooting for him.

Oklahoma won only eight games fewer this season than when Durrant was there, largely because of Westbrook's tireless performances. That didn't seem possible when Durrant made his surprise announcement that he was going to the Golden State Warriors.

Westbrook was by no means perfect. At times, his enthusiasm got the better of him. His unwillingness to trust teammates with a shot may be his biggest flaw, but his competitiveness cannot be matched.

Westbrook is, of course, the most eye-catching player in basketball. He is the one who appears to be trying the hardest night by night. For sheer effort, he leads the pack.

The basketball public remembers 'clutch' performances more than they do performances in lower-pressure situations, and Westbrook had more clutch performances than Harden. Is he the best player in the game? No, that honour goes to LeBron James. Is he the player who sticks out most in your mind this season? Maybe. He may well have turned in more memorable performances than anyone else. When the MVP race got tight in the final two months, Westbrook seemed to find extra gear. Nobody seemed to be working harder.

The man who is pushing Westbrook hardest for regular-season MVP is James Harden. He is averaging 29.3 points per game with 11.3 assists and 8.1 rebounds. His assists ratio is the best in the league this season. Those in themselves are monstrous numbers, not too far off from what Westbrook achieved. If Harden doesn't win it, it may well be the greatest ever performance not to win the regular-season award.

Harden, though, thinks he deserves it. "I thought winning was what it was about," he quipped a few days ago. The Houston Rockets did win more regular-season games than the Oklahoma City Thunder, and the American public usually places a high premium on winning.

Just to refresh the memory, Harden did carry Houston to the NBA's third-best record, second-ranked offence and top-ranked three-point attack. It's not like all this was expected either. Rockets are the biggest overachievers relative to preseason expectations.

It's a tricky call between the two. What exactly does MVP mean? Should we be thinking of who was the 'better' player or, as the term implies, who was more 'valuable'. Either way, it's difficult to separate them. Neither of these two players has a stellar roster. Take both of them away from their teams and the sides become ordinary. Harden may well have the edge in the category of making mere mortals look good. More than Westbrook, he managed to squeeze quality minutes out of those around him. Harden can claim to have been a better team player while still not far off with his individual stats.

It's too close to call. Harden leads 3-1 head-to-head against Westbrook this season. How important should that be? When the two MVP candidates meet face to face, how much weight should we place on who leads his team to a win?

So where is my vote? I will reluctantly give it to Westbrook. Maybe 20 years from now, his season will be remembered just a little bit more than anyone else, and that just clips it for me. If 'the beard' gets it, I wouldn't cry, though. He would have deserved it. What say you?

- Orville Higgins is a sportscaster and talk-show host at KLAS FM. Email feedback to columns@gleanerjm.com.