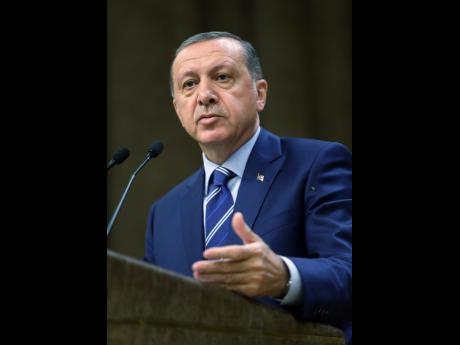 He didn't win his referendum by Hitler's 88 per cent majority, of course. He didn't even win it by the narrow 52 per cent to 48 per cent majority that decided the United Kingdom's Brexit referendum last June. He only got a hair's-breadth 51.3 per cent of the vote, against 48.7 per cent for keeping Turkey's existing parliamentary system. But it's still a victory, and if Erdogan can go on winning elections, he could have almost absolute power in Turkey until 2029.

He can certainly go on winning elections for a while, because his support is rock-solid among the half of the population who felt oppressed by the secular state created by Ataturk almost a century ago. His Islamism is the main source of his political support, and the devout will go on voting for him no matter what he does. You almost wonder why he bothered with this referendum.

He already has almost absolute power in practice. Since the attempted coup last July (whose origins are still murky), the country has been under a state of emergency. The government controls almost all the mass media. One hundred and fifty journalists, 13 members of parliament and at least 45,000 other people are under arrest, and upwards of 130,000 - academics, judges, police, teachers and civil servants - have been fired from their jobs on suspicion of disloyalty.

With those who urged 'no' to the constitutional changes being publicly denounced as coup plotters, traitors and terrorists, it's remarkable that almost exactly half the population still dared to vote against Erdogan's plan. But that doesn't really help: Erdogan wanted to have the law underwrite his power, and now it does.

He can dismiss Parliament whenever he likes. He can enact laws by decree. He can declare a state of emergency. He can directly appoint senior officials and judges (handy, given the evidence of massive corruption in his inner circle that emerged in 2013). He can be a democratic leader if he wants, but he can also be a dictator if he likes. All the checks and balances are gone.

It is a great pity, for Turkey was turning into a genuinely democratic country. Five years ago, there was still a free press, civil liberties were generally respected, the economy was thriving (highest growth rate among the G20 countries year after year), and the country was at peace. And much of this was at least partly because of Erdogan's own efforts.

However, democracy, as Erdogan once famously said, "is like a train. You get off once you have reached your destination". He was a wolf in sheep's clothing. Now the few remaining free media outlets are under siege, civil rights are a joke, the economy has plunged into recession, and the country is at war. And this is mostly Erdogan's fault.

The wars in particular are his own fault. He restarted a war against the Kurdish minority in the east to win over nationalist Turkish voters after he lost an election in June 2015. (He won the rerun in November.) He intervened in the Syrian civil war and eventually alienated Islamic State (for whose members he once left Turkey's borders open), so now both IS and Kurdish terrorists are attacking Turkish cities.

At least 2,000 people have died in the war against Kurdish separatists in the past year, and 500 have been killed in terrorist attacks in the big cities. Ordinary Turks are shaken by all the violence, and at least half of them clearly don't buy Erdogan's explanation that evil foreigners who hate Turks are to blame for it all. Unfortunately, the other half, mostly pious, rural, and/or ill-educated, believes it all and sees him as the country's saviour.

Erdogan is unlikely to last until 2029: the failing economy and the wars will gradually drag him down. But he has divided the country so deeply with his determination to re-Islamise Turkey that an attempt to oust him, even by democratic means, could easily end in a civil war. What has happened to Turkey is a tragedy, and it's hard to see a safe way back.