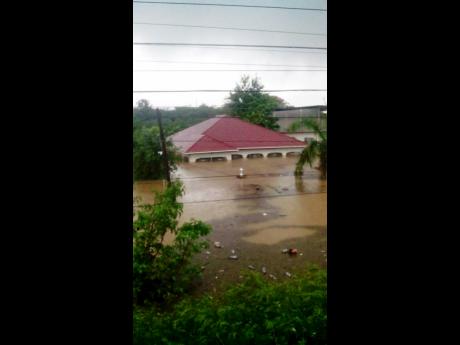 Contributed
Almost covered by the floodwaters is the home and property of Henry Blair and his son, Dwayne. The men were trapped for two hours in the ceiling of the home, located in Palmetto Pen, Clarendon, last Saturday.

Saturday last was celebrated worldwide as Earth Day, when concerns for environmental sustainability were highlighted. Little did I know as I was writing my Earth Day column last week that the actual day would be marked with heavy rains, widespread flooding, and half a billion dollars in loss and damage.

People call it a natural disaster, but was it really 'natural'? Does it have its source and origin in nature or in unsustainable human activity?

I hear politicians blame the flooding on the lack of capacity of our gullies and drains to lead off the rainwater. This basically blames Mother Nature for sending more rain than our infrastructure can handle. No human to blame here, they would have us believe! And so the solution is to build more gullies and drains.

But why are older residents reporting that they have never seen so much water in their long lives? We have had three days of rain before without devastating flooding; and hurricanes in the recent past have dumped more water on the land in a much shorter time. Why the flooding now?

Clearly, the drains are inadequate now, but the same water conduits were up to the task before! The politicians deny that the drains needed cleaning, but the $600 million-$800 million spent just before the local government elections allegedly went to bush clearing, not drain cleaning.

The truth is that no one expected heavy rains in April; heavy rains usually come in June. The parish councils and the National Works Agency were taken by surprise and caught off-guard by the deluge last weekend! Despite what the politicians say, there is local evidence that many drains needed cleaning, which suggests that humans (unprepared politicians) were a major cause of the disaster.

But this is only the beginning of the causal analysis for the flooding last week. We could look at human-induced climate change as the possible cause for the sharp and protracted April showers. Clarendon - historically the parish with the lowest rainfall in Jamaica - was worst hit. This is unusual!

In limestone areas (most of Jamaica), sinkholes are access points to Jamaica's underground cave system, which carries a lot of runoff water. As we build more housing schemes and shopping centres, we have a habit of filling in the sinkholes, and then we are surprised when the place floods during heavy rains. This is the cause of past flooding in Toll Gate and Kennedy Grove in central Clarendon.

Even without sinkholes, rainwater seeps underground through natural channels in soil that is porous (most soils that are not clay). Covering the ground with concrete and asphalt prevents the water from sinking in, and forces it to run off and settle in low-lying areas.

Too much construction is taking place without building approvals or environmental impact assessments (EIAs). Maybe some of the projects are really too small to require an EIA on their own, but their cumulative impact could be quite substantial. This is why every part of Jamaica is governed by a planning authority. It is their responsibility to zone the area under their purview to ensure that there is enough community green space, and that construction projects do not interfere with natural water flow. And they should only approve projects in sync with the spatial development plan.

Look at the haphazard construction on the hillsides above Harbour View, above Barbican, above Ferry, and above Papine. Can't public officers visit construction sites and ask for their building permits? What are they afraid of?

There is no easy way for members of the public to double-check that construction projects that they see have building approval. These approvals should be posted on a website for all to see. Many people I know would be prepared to make reports.

Jamaica does not have a culture or tradition of enforcing environmental laws, or of regular maintenance of public infrastructure.Will we ever learn?

- Peter Espeut is a sociologist and environmentalist. Email feedback to columns@gleanerjm.com.