Bruno Pouezat | Clarendon - striving for human development for all 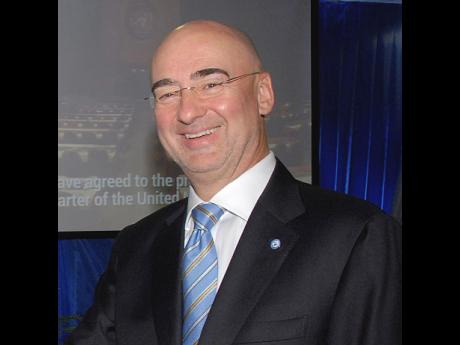 "Human development deals with the physical and cognitive development of people. For Clarendon, it means that a foundation has been built and will allow us to elevate ourselves. This must go beyond job creation. It is important for each individual to invest in themselves and those around them."

Picking up on a central tenet of the sustainable development goals (SDGs), the watchword of UNDP's 2016 Human Development Report is that no one must be left behind - and that sustainable and inclusive development is within reach in every country. Jamaicans joined the 2016 HDR local launch in Clarendon on March 21 to help identify some of the hard tasks needed to achieve the SDGs by 2030 in their community and across the island.

Human development for everyone demands the full integration in the country's development of persons with disabilities, women and girls, poor people, involuntary returned migrants, elder people, etc. Those who spoke at the Clarendon event agreed that major hindrances to human development in Jamaica include unemployment leading to precariousness; limited access to, and often poor quality of, education and health care; high-risk lifestyles including overconsumption of sugar or alcohol; social, educational and professional exclusion (especially affecting persons with disabilities); and violence against women.

According to Peta-Gaye McKenzie, many young people suffer from unemployment even when they have qualifications and diplomas. The high unemployment rate for young people, both with and without a vocation, reflects the wide gap between the education system and an increasingly unpredictable job market. This disconnect feeds increased informal and illegal activities such as scamming or delinquency which, in turn, feed Jamaica's notorious levels of violence. On the other hand, many of Jamaica's tech-savvy, English-speaking, con-nected young people thrive in job niches connected to social media and new technologies - jobs that deliver the decent standard of living demanded by SDG 8.

Key recommendations out of the launch discussions included ensuring that families in social and economic difficulty are offered the same education opportunities as everyone else. Participants recommended that PATH, which extends financial support to the most vulnerable, be made accessible for all the potential beneficiaries. That is not currently the case, they said, due, in part, to lack of information. In line with SDG 3, on Good Health and Well-Being, access to health care should also be facilitated, especially for persons with disabilities and for those living in remote rural areas, and the range of services provided by the health centres should be enhanced.

Nevertheless, people in Clarendon see Jamaica's slow but steady gains in the Human Development Index as a clear sign that progress is being made and that development is achievable.

"Concerning persons with disabilities, human development is essential. For a while, the focus has been on economic performance rather than on human development. Now that the statistics are encouraging for Jamaica, it is important to see concrete improvements in people's life, and especially for people with disabilities. It includes having a better quality of life, access to quality education, having a good standard of living, reducing poverty." (Gloria Goffe, CEO, Combined Disabilities Association).

"At the local level, people finally have a say and can invest into their community," said Eurica Douglas of the Clarendon Parish Development Committee Benevolent Society. The mobilisation of civil society in support of community development embodies this significant advance. Indeed, at the local level, a number of civil-society organisations such as the Combined Disabilities Association of Clarendon and the Clarendon Parish Development Committee Benevolent Society transform people's daily life and boost their opportunities for the future. These local-level initiatives demonstrate that incremental action is the basis for sustainable change and development. Individual and collective engagement makes a critical difference.

Helen Clark, a former prime minister of New Zealand who just completed an eight-year stint as UNDP administrator, said about the report: "We can build on what we have achieved. We can explore new possibilities to overcome challenges and we can attain what once seemed unattainable. Hopes are within our reach to realise." The discussions showed how the people of Clarendon are making it happen in their communities.