Christopher Serju | Samuda treads with diplomacy of an elephant 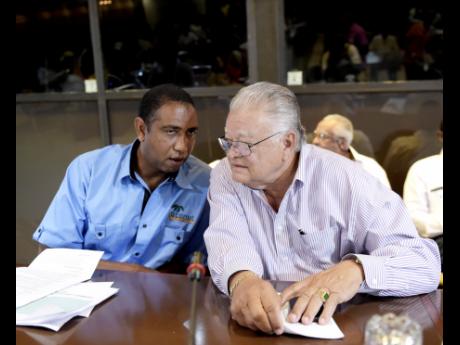 Gladstone Taylor
Christopher Gentles (left), chairman of the CIB board, confers with Karl Samuda, the agriculture minister, at the Jamaica Conference Centre in Kingston on Saturday. 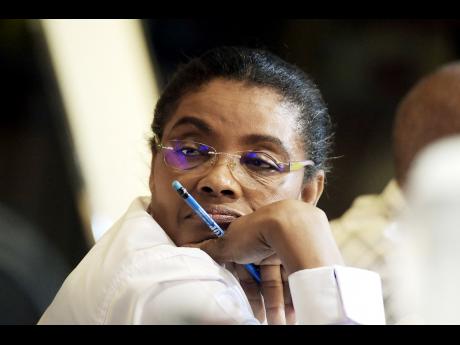 Agriculture Minister Karl Samuda last Saturday squandered the opportunity provided by the annual general meeting of the Coconut Industry Board to sell members of that growers' association on the reasons his Government needs to raid their cash-rich kitty to help meet its budget expenditure.

Instead, he used the occasion to grandstand, belittle the board of directors, and insult coconut growers who travelled from all across the country to hear, essentially, how the Jamaica Agriculture Commodities Regulation Authority (JACRA) would affect the operations of their association and livelihood going forward.

Brimming with contempt, liberally laced with sarcasm, and obviously high from an overdose of 'I don't-give-damn-what you think', the veteran politician used his time at the microphone to make it clear that the $5 billion in dividends earned from their shares in Seprod is his for the taking - whether they like it or not. In fact, the member of parliament for North Central St Andrew left no doubt that if bending the law to achieve his ministerial dictates did not work, he was prepared to craft new regulations in order to achieve this end.

For someone who uses every opportunity to tell farmers that he is "one of them" by recounting his long and distinguished sojourn in agriculture, and accomplishments as a livestock farmer especially, Mr Samuda should know that 'you can't stay pon cow back and cuss him' in the manner he so eloquently did. Despite all his talk about arriving at a consensus by way of dialogue, Minister Samuda came prepared primarily to make the coconut farmers an offer they couldn't refuse. And he stuck to the script, even when it became obvious that he was barking up the wrong tree.

He went to great pains to explain to members of the Coconut Industry Board that their $5 billion he was bent on having had been accumulated by luck, rather than business acumen.

For this reason, the Government, through JACRA, was offering them an opportunity to step into the modern world where they could make real money and achieve financial stability and independence.

Overflowing with charm, he made the following entreaty to the general membership:

"When you have done that and you lay the industry on a firm footing, then you can stand on your own and don't have to rely on shares handed to you each month to pay your expenses. That's all we're saying ... .

"We could never, in all conscience, support a strategy that says that the five billion dollars must be retained by the board, and if ever and whenever you wish to do anything with it, you are free to do as you like. Coming as it is, as a statutory body, no responsible government could do that, especially in contemporary Jamaica. That's the argument."

The other side of the argument Samuda neglected to share is that despite being constituted as a statutory body, the Coconut Industry Board has never received a cent in subvention from any government. Despite this, it has been able to provide registered coconut growers with financial assistance over the years and has funded research to address the many maladies affecting the industry, including the dreaded lethal yellowing, red palm mite and the Ambrosia beetle, among others.

The minister also neglected to tell his audience that the CIB had demonstrated such competence that the Jamaica Labour Party Government, of which he is a Cabinet member, has asked the CIB to continue to manage the industry until JACRA is fully staffed, funded and operational.

He has promised to use today's Sectoral Debate presentation to disclose the full strategy for ushering in JACRA, which now only awaits his signature and gazetting to become law. I am hopeful, but not optimistic, that this presentation will be informed by a confluence of logic, common sense and honesty. This is after witnessing the diatribe that was unveiled on Saturday under the guise of a keynote address.

The churlish tone of his speech, meandering as he did from government minister to bad boy to evangelist - penitent, petulant and patchy, in the most convoluted speech I have ever heard from a sane person - it is likely that Sheriff Samuda missed the emailed responses from members of the Coconut Industry Board. For his benefit, I reprise two of them as follows:

"This is not recess time at primary school and none of our five million marbles is yours for the taking. So if you want to play, you will need to say please, and wait your turn.

"PS: Actually, we don't want to play with you."

The other is simply:

"This is Jamaica, not the OK Corral.

You are not Wyatt Earp and it's way past high noon."

- Christopher Serju is an agriculture and rural affairs reporter. Email feedback to columns@gleanerjm.com.