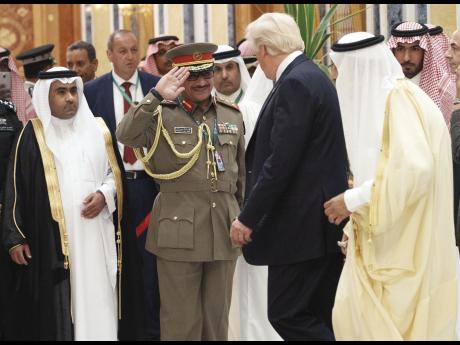 AP
Saudi King Salman (right) and US President Donald Trump are saluted as they arrive to attend the Arab Islamic American Summit at the King Abdulaziz Conference Centre in Riyadh on Sunday.

The media mostly missed it (or chose to ignore it as a piece of meaningless rhetoric), but Donald Trump proclaimed a new doctrine in his speech to the assembled leaders of the Muslim world in Saudi Arabia on Sunday. It goes by the name of principled realism, although it didn't offer much by way of either principles or realism. In practice, it mostly boiled down to a declaration of (proxy) war against Iran.

After rambling on for 20 minutes about the wonders of Islam and the evils of "extremism" and "terrorism", Trump finally got to the point: "No discussion of stamping out this (terrorist) threat would be complete without mentioning the government that gives terrorists ... safe harbour, financial backing, and the social standing needed for recruitment. ... I am speaking, of course, of Iran."

No mention of the fact that every single terrorist attack in the West from 9/11 down to the stabbing attack in Milan last week was carried out by Sunni fanatics, almost all of them of Arab origin, whereas Iran's population is overwhelmingly Shia and not Arab at all.

Iran, to hear Trump tell it, is the source of all the region's problems. "From Lebanon to Iraq to Yemen, Iran funds, arms and trains terrorists, militias and other extremist groups that spread destruction and chaos across the region ... . It is a government that speaks openly of mass murder, vowing the destruction of Israel, death to America, and ruin for many nations and leaders in this room ... .

"Until the Iranian regime is willing to be a partner for peace, all nations of conscience must work together to isolate Iran, deny it funding for terrorism, and pray for the day when the Iranian people have the just and righteous government they deserve."

Trump delivered this remarkable farrago of lies and half-truths two days after Iran, the only Middle Eastern state apart from Israel and Turkey to hold relatively free elections, re-elected President Hassan Rouhani, who has worked hard to reduce the influence of his hard-line opponents. He also signed the deal freezing Iranian work on nuclear weapons for 10 years, and he clearly has popular support for his policies.

The "militias" Iran trains and supports include those in Iraq that are fighting to free the city of Mosul from the clutches of Islamic State (they also have tacit American support), and the Hezbollah movement in southern Lebanon, which has been part of the Lebanese government since 2005. There is no evidence that Iran has supplied weapons to the Houthi rebels in Yemen, despite frequent allegations to that effect by Arab and American sources.

The Iranian government does not "speak openly about mass murder", and the one Iranian leader who spoke about the eventual destruction of Israel (although he did not promise to do it personally) was Mahmoud Ahmadinejad. He was defeated by Rouhani in the 2013 election, and was banned from running again in the one just past. "Death to America!" was a nationalist slogan popular in the 1980s.

Iran, like most large countries, has many conflicting political trends, and with careful selection and enough ill-will, you can find enough extreme and ignorant comments to demonise the country. (You could certainly do it with Trump's America.) But the Islamic Republic of Iran has never invaded anybody, and it certainly does not support terrorist attacks against either the West or the Arab world.

Trump has drunk the Kool-Aid. He has bought into a partisan Arab narrative whose theme is an inevitable (and ultimately military) conflict between Iran and the Arab world, and has all but promised that the United States would fight on the Arab side in that putative war.

This is probably the stupidest foreign policy commitment any American administration has made since the decision 60 years ago to take France's place in fighting the "Communist menace" in Vietnam. Iran has almost as many people as Vietnam, it's five times as big, and it's mostly mountains and deserts - plus some very big cities.

Maybe it is inevitable that Sunni Arab leaders will see Shia Iran through the lens of their own fears and stereotypes, and start making self-fulfilling prophecies of apocalyptic conflict. Trump has no such excuse - except perhaps to point out that Barack Obama also went along with the Yemen nonsense, and that Hillary Clinton would probably have bought the whole foolish package.