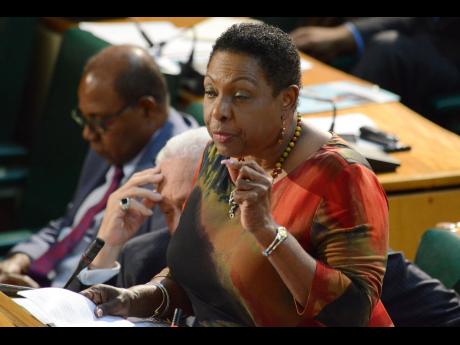 The following are excerpts from a speech by Olivia 'Babsy' Grange, minister of culture, gender entertainment & sport. Minister Grange was making her Sectoral Presentation at Gordon House on Tuesday.

I want to say a word about our programme of support for our national sports representatives, specifically the Jamaica Athletes' Insurance Plan.

The group lif and health insurance plan paid for by the Government as part of a commitment to secure the development and well-being of our national representatives benefited 1,285 athletes as at the end of the last financial year. It is imperative that we are able to continue the programme, and as such, the Government has developed a sustainability plan for the Athletes Insurance Scheme. This will be submitted to the Cabinet once the review process has been completed.

In the lead-up to the Beijing Olympics some of our track and field athletes received some monetary assistance to assist them to prepare for the Games. The feedback was that, though not sufficient, it helped tremendously. Since then, a programme of assistance has been made available to athletes preparing for major championships, including the Rio Olympics. But, by and large, it has not been structured.

Moreover, the assistance was only made available to track and field athletes, to the exclusion of all others, which for some time now has not sat well with me.

It is for this reason that I will be putting together a committee to undertake a review of the programme, with a view to coming up with a revised format which would be more structured and more inclusive. The members of the committee will be named in short order. I want to assure our athletes and the nation that this is a priority for us, and the revised programme will be rolled out very soon.

Sports as a catalyst for national development

As a country, we continue to grapple with our seeming inability to convert the notoriety of our athletic prowess on the track, into tangible economic benefits for our people, and the country at large. The debate rages on. Sports tourism is the buzzword these days.

I am pleased to advise this Honourable House that my colleague, Minister of Tourism (Ed Bartlett) and I take this very seriously and continue to look at ways in which we can intensify our efforts to wrest our share of the pie away from the competition. Make no bones about it, it's a very competitive marketplace, but we truly believe that our athletes, and the impact of our cultural ambassadors on the world, primarily through our music, has given us a tremendous comparative advantage. It is for us to convert that into measurable economic returns.

One of the ways in which we will be seeking to do this is to go after major international sporting and cultural activities, to stage them right here in Jamaica. I will in short order be naming an international bidding committee, under the chairmanship of none other than the Honourable Mike Fennell, the outgoing, long-serving president of the Jamaica Olympic Association, and world-renowned sports administrator, to aggressively target these events.

This strategy will be underpinned by the Jamaica 55 Legacy Programme, which will be the most comprehensive infrastructure development in the sports and cultural industries since independence, and the building of our national stadium. More on that later in this presentation.

The strategic business plan has been completed and the review process is in an advanced stage. Once the review has been completed, this will be submitted to the Planning Institute of Jamaica (PIOJ). Related activities scheduled for this fiscal year include workshops and training seminars on fabric restoration and preservation, as well as digitisation of artefacts.

The establishment of the Caribbean Sports Medicine Centre came out of a discussion with Usain Bolt. He expressed concern that elite athletes, such as himself, had to travel outside the country for treatment that is not offered in Jamaica. What if we could offer the services here? What if we could offer the services to athletes outside of Jamaica (in the Caribbean, Latin America, even further)? Just imagine the value of such a centre in Jamaica.

My ministry is collaborating with the University of the West Indies and Team Usain Bolt to establish this centre. It will be a lasting legacy for our 55th anniversary celebrations to the people of Jamaica and also a lasting legacy to Usain Bolt.

This year we will witness the final act in the extraordinary career of the world's greatest athlete the incomparable Jamaican, Usain Bolt.

He will compete for us one last time at the National Stadium on Saturday, June 10, 2017, at the Racers Grand Prix. We have made the strategic decision to support the Racers event, for the historic and social value of the occasion. Our financial support of the event is also in keeping with our sports for economic development thrust.

One obvious value of events such as the Racers Grand Prix is sports tourism, which benefits, among others, the accommodation, entertainment, culinary and transport subsectors.

We will also be taking steps to memorialise and celebrate Usain's outstanding achievements. The Bolt statue is close to completion and will be erected at the National Stadium to coincide with his retirement.

The Bolt statue and three other statues of outstanding athletes Shelly-Ann Fraser- Pryce, Veronica Campbell-Brown and Asafa Powell are part of the legacy programme for Jamaica 55.As we prepare to celebrate 55 years as an independent nation, we are aware that we are still a young nation. But we have understood not to assess the power of our country by its chronological age nor by its geopolitical size.

Rather, we judge this country by the capacity of the dynamic forces that propel it onward, by the mystique that remains incomprehensible to so many, by the unwavering resilience of its people, by the national pride and recommitment to stand up for our rightful place in this new thrust towards national prosperity.