Jaevion Nelson | Blind and deaf to pleas of disabled 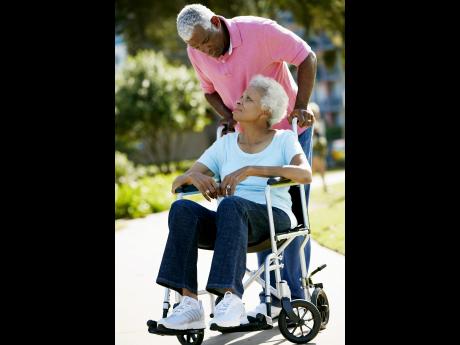 It's quite shocking and equally shameful that it is taking the Government such a long time to put the Disabilities Act, which was passed in 2014, in force.

Are people with disabilities not deserving of equal protection, rights, and justice like our able-bodied legislators? Do our parliamentarians not know of their obligation in this regard? Are they not embarrassed by their gross negligence? This isn't even a controversial issue and it is taking so bloody long!

It has been almost three years since the act was passed (in the Lower House in July 2014). Sadly, the 189,000 (ILO)-405,000 (WHO) people with disabilities in Jamaica are seemingly not a priority for our legislators and are, therefore, yet to have adequate protection in law.

On October 27, 2017, at the Jamaica Inclusive Education Conference at the Montego Bay Convention Centre in St James, Derrick Kellier (the minister of labour and social security at the time), said, "The new Disabilities Act 2014 covers the integration and inclusion of persons with disabilities in all areas of national life, including education, employment, health, housing, transportation and much more. With the Disabilities Act 2014 firmly in place, the progress of members of our native disability community as citizens of Jamaica is now fully guaranteed."

Typically, a law requires two things for it to be in force: the governor general's signature for its ascension, and it being gazetted (in that order). However, in the case of the Disabilities Act 2014, given the public education and actions that must be undertaken, it also requires a regulation that is a sort of subsidiary legislation that would expound on what is contained in the act and thereby strengthen the provisions with details.

Can you imagine that the regulations have not been developed? I have it on good authority that the consultants have only recently been selected after the tender was issued around September to October 2016 and reissued earlier this year.

What a frightening reality that Jamaica was among the first countries to sign the Convention on the Rights of Persons with Disabilities (CRPD)! Jamaica's leadership gave the community of people with disabilities much hope.

I called the Ministry of Labour & Social Security on Thursday to enquire about the regulations and could not get any information. In fact, one person was stunned by my query about why it is taking so long, claiming that they have never been asked that by anyone. Ha!

Should we brace ourselves for 10 years for the regulations to be approved? Is it that we are no longer (to borrow from Kellier) "guided by common sense, compassion and a collective willingness to include, rather than exclude, members of the disabled community from the exciting process of national development"?

Are our legislators no longer interested in delivering on their promise and putting in place "effective measures in place that will assist greatly, going forward, in lifting members of the disabled community upwards"?

Having a disability should not cast you into misery, into a life of little to no opportunity. It shouldn't determine your fate. It shouldn't hinder you from fulfilling your dreams and ambitions. People with disabilities should get a chance to have a good education (After all, their parents' tax dollars contribute, too). They should have full and equal access to a diverse range of employment opportunities. Parents shouldn't have to worry about their children's future when they're born.

Sadly, in Jamaica, people with disabilities are not even second-class citizens (unless they are born to the 'right' family and, to some extent, in Kingston and St Andrew). Jamaica is a place where legislators pussyfoot with, and abdicate, their obligations where the rights of people are concerned. It's embarrassing that interest groups are so silent on the issue given that their communities' needs are exacerbated by one's disability.

Kudos to those businesses that help to provide employment opportunities for the community. Kudos to Progressive Foods, Hi-Lo and MegaMart for their role in this regard. I love what Cafe Nita has been doing with Deaf Can Coffee. Big up Digicel Jamaica Foundation for all its work with children with disabilities. More companies need to donate profit to this community.

- Jaevion Nelson is a youth development, HIV and human-rights advocate. Email feedback to columns@gleanerjm.com and jaevion@gmail.com.