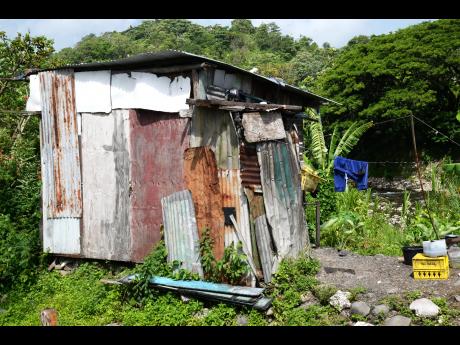 Jermaine Barnaby
It’s time to chart a transformational land policy that will provide poor Jamaicans with better housing than shacks like this one in Diamond, Buff Bay, Portland.

Both the Government and the Opposition are separately studying how the process of land titling in Jamaica can be made more accessible. Everyone is united in the conviction that titling is important and must be simpler to achieve, but we can't yet get over the divisiveness of our fractured political culture to combine scarce talents to work out the changes.

Having a few ideas and a little experience in the field, I gladly accepted Daryl Vaz's request to assist his ministry's efforts and, of course, I am ready to contribute to the similar work my party has begun so energetically under Norman Minott's capable leadership..

After all, people and land are the basic and sufficient resources given us by God to shape his kingdom of justice and love for all.

Many Jamaicans do not appreciate the value of a registered title to land. It is like marriage and the stable family. Purposely denied the opportunity of ownership for so long, a culture of informal tenure, the ingenuous alternative of family land and the now almost unstoppable recourse of land capture have become normative.

Most likely, there are more squatters than titled landowners in Jamaica.

And since there has been no sustained effort to resettle informal settlers or any contemporaneous sanctions for capture, many people accept the status quo as unchangeable.

'A so it set.' "Why should I, and how can I, pay for land I have been living on from birth?" is a common cry. Many things follow: the growth of the informal economy, the throw-up electric connection, free water, no land taxes, deteriorated infrastructure, unplanned structures, and likely rampant social disorder.

In short, we have the classic case of Hernando de Soto's 'dead assets' - resources of value that cannot be factored, traded or inherited, which entrench class divisions and cramp any hope of sustained and equitable prosperity.

But it need not be so. We have the resources to launch a project of public education, sensitising people of the crucialness of landownership for economic and social progress, emphasising the right to private property, as well as the social obligation to use land productively rather than let it remain idle.

We need to begin discussion on a progressive land tax regimen based on improved value that incentivises productive use of property and balances tax obligation with the cost of services provided.

The laws relating to title based on adverse possession are in need of reform and used to connect control with ownership. The promised reform of the procedures of succession, especially in intestacies, could free up a wealth of assets, collateralise urban renewal, and give birth to new pride and community spirit.

Unless this is done, the new Building Act will do no more than attempt to impose order on top of festering chaos.

Let us push the envelope of possibility further. In peri-urban communities, empower private developers, in partnership with the Ministry of Housing, to identify land for human settlement. Provide roads and basic infrastructure, identified lot boundaries, and a splinter title and offer purchase of these service lots as an alternative to squatting on gully banks and riverbeds, with penalty of removal for those who insist on the old ways.

Price these alternatives modestly - no freeness - while ensuring that the National Housing Trust overcomes its chronic constipation and leads abundant private capital into long-term mortgages for those who take up the offer. Then would you have real human and national development well beyond 5-in-4.

Next time, let us look at how idle sugar cane farms, mined-out bauxite acreages, and so-called Crown lands can be used to redress the settlement hunger, still unrequited despite the sacrifices of Bogle, Gordon and those who bear their spirit through our history.