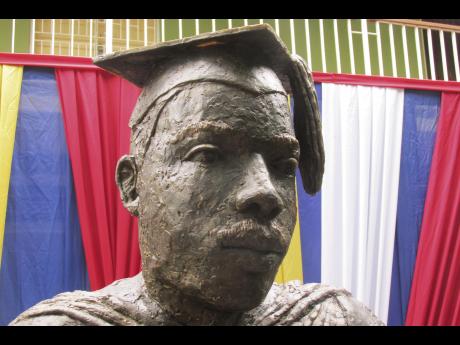 What do you think of Raymond Watson's Marcus Garvey bust at the University of the West Indies?

I am horrified! The money used to facilitate the completion of this piece of h'art (I did that on purpose) would have been better used if it had gone to pay for some students' tuition or clearing those who still owed for exams.

It looks like a younger image of Garvey. It's not the older Garvey we are accustomed to seeing all over the media. Get over it, people! It cannot be eaten!

If I showed my students this image, they wouldn't know who it is. Take back your money and stop justifying artists' interpretations.

This sculpture doesn't look like the one that has been known over the years. I know that there must have been some pictures of Garvey that are the true representations of him.

I like the artistic challenge of the perception we have of Garvey, one that has frozen/romanticised an image of him that reflects his later years. - Bertram BlackRaven Gayle

He looks young in this, but WE grew up with the older, mature version. That's the one I want to take my children and grandchildren to see when we come to visit Jamaica.

I appreciate the fact that one of our greatest freedom fighters has been sculpted, but my gosh, mi neva know seh Marcus Garvey was so terrible-looking. This looks awful.

I would ask for a do-over. This looks nothing like Garvey.

Which Marcus Garvey that? Unnu wheel and come again. That should have never been displayed for public eyes. Me shame bad.

Everyone laughing like this is a joke. This is nothing but a disgrace. Demolish this statue because it represents not the Marcus Garvey we know. How can UWI even think this is anywhere near monumental?