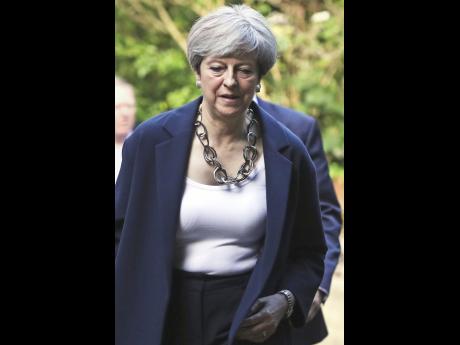 File
Britain's Prime Minister Theresa May arrives to attend Holy Communion at St Andrew's Church in Sonning, Berkshire, England, on Sunday. May is under pressure after the Conservatives lost their parliamentary majority in last Thursday's election.

It behoves us to take a closer look at the recent Tory debacle.

In the 2015 election, Conservatives proved the polls wrong by winning an absolute majority of six in the 650-member Parliament. Conservatives won 331 seats; Labour 230; Scottish National Party (SNP) 55; the Liberal Democrats (Lib Dems) 9; 'others' 25.

Yesterday, all my troubles seemed so far away.

Now it looks as though they're here to stay.

Oh, I believe in yesterday.

After losing the Brexit vote, David Cameron resigned as PM and Theresa May took over. I doubt Theresa took the time to smell the Brexit coffee, because, if she did, she'd have realised that this result was a last-gasp, back-to-the-wall stand by traditional Brits, akin to the battle at Dunkirk. Like Dunkirk, outnumbered traditional Brits fought doggedly while young, irresolute 'Remainers' stayed in out of the rain and watched it on the telly.

I've been writing for 10 years trying to warn everybody, but especially the Christian Church, that the face of Europe is changed forever, but not through the actions of terrorists. Thanks to the EU and Muslim polygamy, England no longer looks, thinks or behaves like England. Soon, Christianity will struggle to stay alive in Europe.

Look, there's a chap named Moeen Ali playing cricket for England. Before him, there was Monty Panesar, who at least had the decency to be named 'Monty'. Theresa May's bulldogged insistence on negotiating a 'hard Brexit' only inflamed feelings of betrayal among the majority of new Brits. Instead of trying to walk back the Brexit referendum result, she doubled down. She should've known she wasn't young Britons' favourite. With apologies for adjusting the lyrics of two of our greatest lyricists, John Lennon and Paul McCartney:

Suddenly, I'm not half the (wo)man I used to be.

There's a shadow hanging over me.

David Cameron won an absolute majority by promising Scotland that UK would stay in the EU if Scotland voted against independence. Before 2015, the last two British Parliaments were hung Parliaments. Surely, Theresa should've realised another was imminent? Scots incensed, the youth angry, traditional conservatives upset with Tories for supporting EU. Surely, Theresa should've thanked God (and David Cameron) for giving her a small majority and tried banking achievements before calling an election in 2020?

Why she had to go,

I don't know, she wouldn't say.

I said something wrong?

Now I long for yesterday.

But the most egregious oversight made by Theresa May was to avoid mirrors that exposed her greatest crime, namely, her stubborn insistence on keeping her vagina. Like Portia, she was appointed PM by party delegates, not national plebiscite. Like Portia, she underestimated the traditional male resistance to female PMs. It's worse in England, with so many Muslim men in the electorate. I'd be surprised if more than five per cent of Muslim men voted for her.

Jeremy Corbyn is a buffoon who keeps repeating himself lest the audience miss his simple message, but he did say something profound on election night: "Politics has changed!" Yes, indeed. Worldwide, electorates are voting more from self-interest than party loyalty.

In Jamaica, JLP seems to have seen this light, but PNP remains incurably addicted to playing the tribal game intra- and interparty. On Friday morning, PNP Chief of Staff (COS) posted this on social media: "Theresa May called the election to get a clear mandate. The people voted, and this is the result ... . How will she read it or spin it ... can you imagine how JLP is reading this result?"

Somebody needs to get chief of staff a muzzle. Borrow the one White House staff failed to convince Trump to wear. Does every world happening send a tribal message to Jamaica? Or is it more likely COS has inadvertently broadcast to the JLP that PNP fears a snap election?

Up against all these negatives, Theresa sealed her fate by selecting a #8 day (June 8) for the election. With polls showing her having a 20-point lead and a poll published on June 7 predicting a landslide win, she elected to believe the polls instead of one fat, red, ugly Jamaican numerologist. She won't last three months. Ta-ta, Theresa.