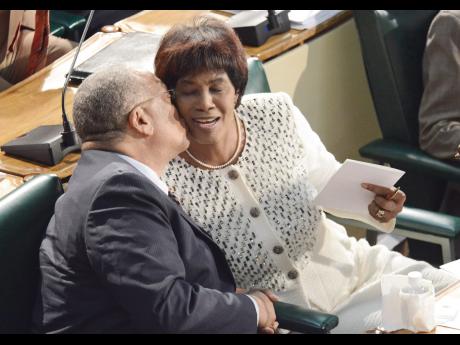 In a truly historic week in the Jamaican Parliament, they came together across party divide and did it for Jamaica. The debate was fierce and hot, and even rude. There was sharp and apparently inflexible party posturing.

The Opposition, almost to excess, pursued its job of standing up for the constitutional rights and freedoms of the people against any possible encroachment by the Government. They tendered a dissenting minority report from the joint select committee set up to consider the bill and to receive submissions from the public.

The Government side seemed determined not to budge from initial positions. But, finally, in the dead of night last Wednesday, an exhausted House of Representatives, with strong bipartisan support, passed The Law Reform (Zones of Special Operations) (Special Security and Community Development Measures Act, 2017.

There were 18 amendments to the bill. 'Anti-crime consensus,' The Gleaner shouted on its front page the following morning; 'Gov't, Opposition coalesce to pass controversial crime bill.'

Parliament had taken Portia's exit advice. After 36 years as the representative for South West St Andrew, in her final speech in the House the day before, she pleaded with her colleagues, "We have a responsibility to do what is in the best interest of the Jamaican people."

Portia Simpson came to representational politics at the parliamentary level in 1976 when political tribalism and its ugly pickney, political violence, were on the upswing. The state of emergency declared by the Government that year, partly in response to escalating violence associated with the election campaign, assisted the young KSAC councillor to capture what up till then was a safe JLP seat, having never been won before by the PNP since its creation in 1959. Her 76 per cent margin of victory in '76 just kept growing to the point where it equalled the number of voters, even when a few voted for the JLP candidate.

Since 1976, criminal violence, indexed by murder, has progressively increased, with South West Andrew making its above-average contribution. What a gift to Portia, better than all the bipartisan pretty speeches that she endured last Tuesday, was the bipartisan passing the following day while she was still a member of the House. Her resignation was tendered on Thursday and immediately took effect.

The decline of safety and order has long been a national public emergency, at least since when the murder rate passed the symbolic 1,000-per-year mark in 2002.

A national public emergency is bigger than any party, bigger than any group and requires a bipartisan national public response. Nothing less will do. The crime zones bill is an important move. The resources for security and justice which the prime minister has promised must now be provided. And we know where to find them. These resources are sitting in the national Budget and must be repurposed in much the same way that budgets are rewritten to release resources to deal with natural disasters.

The referendum of September 19, 1961 had seen Jamaican electors voting decisively against remaining in the West Indies Federation (54.1 per cent). Just six days after the vote, the Cabinet, headed by Premier Norman Manley, on September 25, gave instructions for a working party to be established to determine the steps to be taken to prepare the country for Independence.

A resolution to prepare a Constitution was tabled in the House of Representatives of elected members by the premier on October 17 and the same resolution was tabled in the Legislative Council of nominated members on October 20. An 11-member Joint Independence Constitution Committee, drawn from both chambers, was established on October 30 and held its first meeting the next day - five from each chamber, three from Government and two from Opposition, with Premier Manley as chairman.

The JLP's Edward Seaga, losing Leader of the JLP, led the documenting of specific instances of election malpractices that had occurred in recent elections and where they had occurred. The report was tabled in Parliament.

Seaga and Manley agreed, in a meeting, to establish an informal consultative committee between the political parties in Government and Opposition. That consultative committee recommended that the EOJ be transferred from being a department under ministerial control to an independent body under the oversight of an independent committee of Parliament. A special joint select committee of Parliament considered the matter and proposed the establishment of an impartial Electoral Advisory Committee (EAC) with three non-political selected members to be appointed by the governor general on the joint advice of the prime minister and the leader of the Opposition, two nominated members each from both political parties, and the director of elections as a non-voting member.

It was agreed that Parliament would, by convention, take the advice of the EAC on electoral matters. That convention has held since the birth of the EAC in 1979. It was later decided that the selected members would be appointed by agreement of the nominated members and only if they could not agree would the governor general step in.

The bipartisan Electoral Advisory Committee, forged in the crucible of political turmoil and morphing into the Electoral Commission of Jamaica, has slowly, steadily led a cleaning of the electoral system to the point where no candidate can now be elected on the basis of fraud, intimidation and violence.

The state of safety and order, as a national public emergency, deserves similar bipartisan response. The bipartisan support for the amended crime zones bill is a historic giant leap.