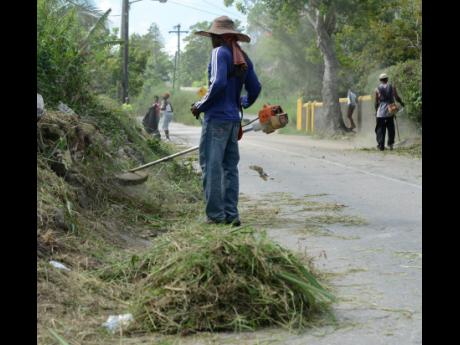 I'm tired of talking about politics, so I will soon put it down for a while. But I have to say something because the much-anticipated report by the contractor general on the bushing programme has arrived.

It is 485 pages long, meaning that they're not in the business of sparing trees down at the contractor general's headquarters. But it's worth a read, especially for you few vigilant citizens who want to know how our Government is actually carrying on. The rest of us - the majority - will need the summary version because we are too busy trying to survive 'prosperity' to read almost 500 pages.

It so happens that your friendly neighbourhood newspaper hit the nerve of the matter in an editorial titled 'Beyond spinning the OCG's report'. Said The Gleaner:

"Our great disappointment is that Andrew Holness, the first prime minister born after Independence, promised to be different ... . This report should be a reminder of that declaration; of Jamaica's slippage in the global corruption index; and of his acknowledgement in February that in the 55 years of Jamaica's Independence, 'we could have achieved much more were it not for corruption in many forms'."

So, why is this $600-million-turned-$800-million project so important? To my mind, it isn't important simply because of the money, although that isn't without significance. Nor does its importance lie in the Opposition's losses.

More important was the fact that Mr Holness was, really for the first time, firmly in place as 'Government' and overseeing the operation of the country's democratic functioning. The key takeaway from the bushing project is that his functionaries, perhaps less artfully than some of their predecessors, hued to the same tried-and-true path. Ultimately, we are ambling along the same roadway as before.

That is a bit of a tragedy. Some small familiarity with Jamaica's political system has yielded to me this firm conclusion: The political violence that has disfigured our little country, and in many respects ruined it, was not the result of spontaneous ideological differences between 'socialists' and 'capitalists' or any other such nonsense. In actuality, the disorder and acidic mayhem was far more craven and debased, bought and paid for with our tax dollars. And that was procured through the elaborate systems of patronage through which the parties irrigate 'the ground' with small-scale benefits.

And that is why the $800-million pre-election slush fund story is so important. The first post-Independence prime minister, who has seen what the folly of the previous generation has bequeathed us, jumped on the back of the horse and kicked it into a full gallop heading in the same direction.

Honestly, though, I can't afford - psychologically, I'm talking - to give up hope in Andrew. If he could break the back of this system, where "if you wanna get some food, your brother's gotta be your enemy", it would be a phenomenal achievement. But right now, di corna look dark.

Anyway, let's talk a little more about the spin that was put on the report by the administration, because it was truly remarkable.

Start here. I'm told about one particularly skilful scammer who had fleeced and robbed an elderly couple so thoroughly that, exasperated, the gentleman victim declared angrily: "You've broken every promise to send us our lottery winnings, even though we've sent you thousands of dollars, so don't call here EVER again or I'm calling the police!" With that, he hung up. The scammer waited a few moments, considered his options, then rang the number back.

Said he in a gruff and disguised voice:

"Sir, this is the FBI ... we know you've been scammed. We've been tracking it and you're going to get all your money back. We're on to this scammer. What we need you to do is just send one last big transfer to him so we can trace it and finalise our investigation for the arrest."

The man on the other end, relieved that 'the cops' were coming to his rescue, answers: "OK, sir! I will send it right away!"

The true professionals just don't quit. You think the gig is up? No. The gig is never up.

I recalled that story when I read Horace Chang's response to the OCG's report. In fact, I just wanted to stand up and applaud, and maybe call up Chang and admit it: "I take my hat off to you, sir! You. Are. Unstoppable! You. Are. A. Master!"

The risible theory advanced is that because sacks of public money were dispensed to government supporters through specially chosen subcontractors and 'facilitators', and 55 per cent of the constituencies 'touched' were Opposition-held ones, THAT is the sign of even-handedness and probity.

No comment on the local government divisions where the money was spent, and, most important of all, who had control and direction of the spending. Of course, the issue was, and remains, the targeted patronage immediately prior to a local government poll.

The whole performance was beneath this otherwise amiable man and effective minister.

Again The Gleaner editorial nails it:

"To be inveigled into the political spin over the contractor general's report on the J$600m election-eve verge- and drain-cleaning project is like voluntarily accepting a very bad case of vertigo. But in the end, there is still the truth."

The truth? The Cabinet ran roughshod through the established rules, specific government ministers directed who were to be designated subcontractors, and the whole thing smells like Riverton dump.

Finally, some housekeeping. After last week's column, I received notes from two impeccable sources explaining that Prime Minister Golding did NOT, in fact, enact a raid on the National Housing Trust (NHT). Money from the NHT had been sought by way of an application for a loan of funds that the board considered and rejected as being outside its mandate. I thank Mr Golding and his upright former chairman, Howard Mitchell, for their communication.