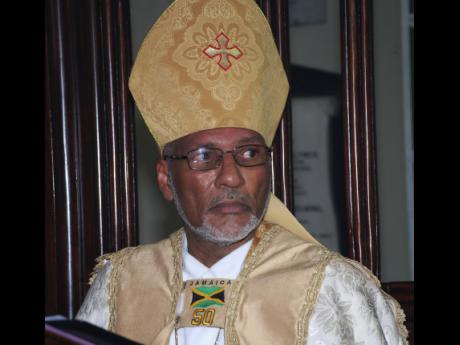 I have not read the written submission by Anglican Bishop Howard Gregory to the parliamentary committee examining the Sexual Offences Act and related laws, and all I have to go on is the report in The Sunday Gleaner of July 23, 2017. The report advises that the Lord Bishop urged the parliamentary committee to "recommend the removal of the offence of buggery from the law books, widen the definition of rape, and recognise marital rape".

There are several different issues here, each requiring separate treatment, but before getting into those, The Sunday Gleaner also reports that Bishop Gregory "emphasised that his views were personal", meaning that they might not reflect the views of the Anglican Church in Jamaica, of which he is the administrative and spiritual head. Here, Bishop Gregory is either naÔve or dishonest: How can a bishop, who is the teaching authority of his denomination on matters of faith and morals, express controversial views publicly and claim that they are his own and not those of his denomination?

The worldwide Anglican Church has been in turmoil since openly gay Anglican priest Gene Robinson was consecrated Bishop of New Hampshire, USA, in 2003 with his boyfriend in the front pew of the church. In June 2008, Bishop Robinson married his gay lover ("I always wanted to be a June bride," he announced); they divorced in 2014.

Previously, in 1998, the 13th Lambeth (Worldwide) Conference of Anglican bishops (held every 10 years) had passed a resolution stating that "homosexual acts" are "incompatible with Scripture".

The Gene Robinson affair and subsequent decisions on gay marriage have split the Anglican (Episcopalian) church in the USA. Disaffected Episcopalians have disaffiliated from the Episcopal Church and formed the Convocation of Anglicans in North America.

After Gene Robinson was made bishop, 230 of the 880 Anglican bishops across the world boycotted the 2008 Lambeth Conference and aligned themselves with a breakaway movement, the Global Anglican Future Conference (Gafcon). Gafcon held the first Anglican Futures Conference in Jerusalem in 2008. Archbishop Drexel Gomez, Primate of the Anglican Church in the West Indies, who had stated publicly that Gene Robinson's ordination is incompatible with Scripture, was expected to attend.

I think the Lord Bishop of Jamaica owes the Jamaican people a clear explanation of the position of the Jamaican Anglican Church on homosexuality and same-sex marriages. In his editorial yesterday, the editor-in-chief of The Gleaner opined in conclusion:

"Bishop Gregory did not advocate for same-sex marriage and nothing in his submission is a natural progression thereto, as the fundamentalists will claim. The definition in the Constitution of marriage as a union between a man and a woman, however, undermines other fundamental rights guaranteed by the supreme law. For it eliminates the freedom of one group of citizens, gay people, to express love for each other through the institution of marriage."

It seems that by the time he came to write his last sentence, the Gleaner editor-in-chief had forgotten what he wrote two sentences earlier. Never mind what fundamentalists may say, The Gleaner editor-in-chief is saying (and I agree) that once gay sex becomes legal in Jamaica, gay people will demand "to express love for each other through the institution of marriage".

In his submission, Bishop Gregory cautions Christians against believing that they must be the gatekeepers of the law against buggery in order to prevent the legalisation of same-sex marriage. "This submission does not accept the cause-and-effect relationship which is being introduced into this matter, neither is it advocating homosexual marriages". The Gleaner editor-in-chief disagrees with you, Bishop Gregory.

Is the good bishop (perversely quoting Dietrich Bonhoeffer) arguing that the Church must not see herself as the gatekeeper of morality in society? Must not the Christian Church see her fundamental role in Jamaican society as fighting hard against political corruption and immorality, wherever it may be found?

Since political Independence in 1962, the Jamaica Council of Churches (JCC) has lobbied the Jamaican Government on issues like political violence, electoral fraud, and the promotion of a freeness mentality. Is Bishop Gregory repudiating the history of the JCC? Is Bishop Gregory saying that the Church must not lobby the government about issues of morality and immorality she considers important? Must the prayer breakfasts, therefore, be discontinued?

No, Bishop Gregory. The Church must not return to the days before she became the social conscience of the nation. LGBT persons must be loved and welcomed into our churches, for all of us are sinners. But even though we love the sinner, we hate the sin. The Church must not deny her mandate by loving and accepting the sin. [To be continued.]

- Peter Espeut is a theologian and Roman Catholic deacon. Email feedback to columns@gleanerjm.com.