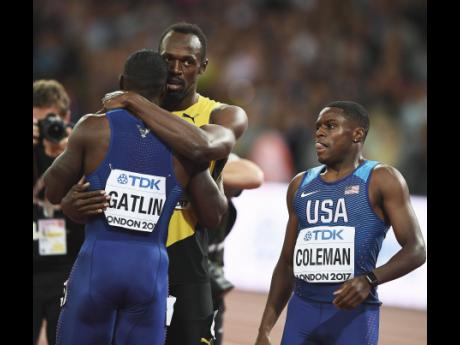 Usain Bolt is the greatest sprinter in the history of athletics. I bestow this accolade by virtue of the phenomenal times he has run, the way he has dominated and devastated contender pretenders to his sprint throne in championship races, and the impact of his likeability factor that has endeared fans to him and to a sport which needed a hero.

However, even greats may have an Achilles heel. For Usain, it is said, his was a tendency to slacken up on training for partying. Could that have been the issue for his worse-than-sluggish starts? Especially with just the 100 metres as an individual event to focus on, did Usain spend sufficient time working on his starts and other shortcomings against exercising indiscipline to party more than train?

Was Usain too overconfident, which caused him not to put much energy into training? Was Usain as hungry as before?

Come on, the winning time of 9.92 is mere pedestrian for the ilk of Usain Bolt, The Legend. What could have caused him to be struggling for third in 9.95 seconds? Is it the indiscipline of too much partying at the expense of training? If that is so, how much has Usain regretted this now?

Likewise, if he did sacrifice training for partying, has he cheated us and himself of being the epitome of a fairy- tale legend to have been able to leave the sport unbeaten in his recent major championships?

The converse to Usain's underachievement saw an unwanted champion, his nemesis - Justin Gatlin. Who would have thought?! For me, on the premise of 'innocent until proven guilty', I have Gatlin as a true champion and one all kids should aspire to emulate.

For Justin, at 35 years old, to have won in Helsinki, 2005, to return to win in London 2017 is pretty remarkable. Likewise, despite him paying for his crimes, the media have seemingly continuously vilified Gatlin, which has had the effect of turning spectators, worldwide, against him but that never seems to shake his competitive spirit.

Gatlin was always a contender. Even with his wins across Europe and many other places, it has become normal for Gatlin to be booed. Is this fair?! Gatlin seems be masked as the Darth Vader of track and field, and Usain, Luke Skywalker.

Of the two, Gatlin may very well have had it the toughest. He was found guilty of being a drug cheat and had to deal with all the negatives of same, including the temporary ban from the sport, as well as the shame and subsequently, the continuous vilification after his return.

How is it he has stayed focused through all these hard times? How is it he has stayed on top of his game throughout all this? Indeed, I believe the track and field world has been more than unfair to Justin Gatlin in how we have related to him. What are we saying, once or even twice guilty, then always? Is that fair?

Subsequent to his infringements, based on IAAF regulations, isn't Gatlin legal to compete? Does it matter if he seems remorseful or not? So, shouldn't we continue to be more accommodating of this athlete, Justin, who has every so often shut his ears to naysayers and just continued to perform at the highest level?

Shouldn't we be glad that he has contributed to providing us with possible our most mouthwatering track races in his rivalry with King Bolt? Hasn't this helped to impact Bolt's legendary status?

Justin Gatlin is a true champion and we should endeavour to appreciate his accomplishments. To have won 12 years ago and to return to spoil the party for Bolt, The Legend retiring, deserves the highest superlatives. Again, hasn't Gatlin been sanctioned by the IAAF to compete?

From this latest 2017 World Championships win, possibly Gatlin's greatest accomplishment, people can learn that even if you fall, you should pick yourself up and continue striving. And even if you fall again, you should get back up and keep on, amid all the name-calling and discouragement that may come at you. Gatlin is a true champion and one that should be embraced to motivate us in our various circumstances.

With this recent win, corporate bodies, educational and other institutions all over the world should sponsor Justin to present to them as a motivational force for these various groups. When everyone thought he was done, Gatlin came through!

Justin, I salute you, as we all should. Even Usain to Gatlin, as quoted by a number of sources, said,"Congratulations. You deserve it."

Gatlin, I salute you for rising after your falls to still retain champion status. Indeed, you are an inspiration. May the rest of your career go well as you deservedly bask in this win!

- Garfield Goulbourne is a social commentator. Email feedback to columns@gleanerjm.com and garfieldgoulbourne@yahoo.com.