Patria-Kaye Aarons | Looking down the barrel of a gun 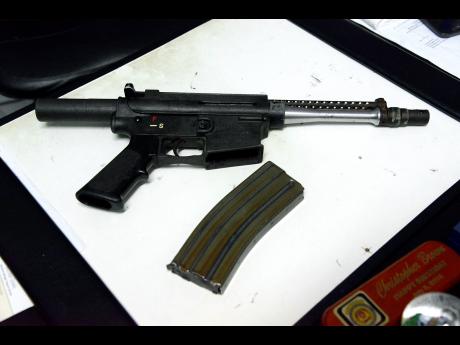 Ian Allen
One of the many illegal guns seized by the police in Rockfort since the start of this year.

Guns are some of the worst things to ever have happened to humanity.

I got a four-minute, 15-second voice note last week that made my blood freeze. It sounded like a war. Four minutes and 15 seconds of near non-stop gunfire, of frantic scurrying, of tears, of screams about who had been shot, and of commands about who must guard the lane. I was made to understand it was a recording from Rockfort, Jamaica.

The scared residents of Rockfort told their stories at a press conference. Stories about how guns have held them hostage in their own communities. How guns have them living in total terror since May. One mother told of how she routinely arms herself with hot oil to protect her girls. How she was forced to make inside her washing machine their secret hiding place. Another gave details of the time a gun was held to his temple and how he shook like he never had in all his 59 years. And the police, even with their guns, still can't protect the people. The stories were heartbreaking and downright scary, and I had decidedly come to the conclusion that I hated guns.

I was sure. Guns are some of the worst things to ever have happened to humanity.

This wasn't always my position. There was a time that I trusted the security of a gun's protection. A time I wanted my father to carry a gun, and my future husband to own a gun so I could feel safer. Now I see things differently.

I curse the day guns were ever invented. I can think of no reason why their presence is ever necessary. Not for defending yourself, or protecting citizenry, or killing food, or anything else.

I distinctly remember living in Scotland and seeing police officers in city centres armed with nothing more than a baton. Mark you, they never faced the criminal elements Jamaican police have to contend with daily. Their worst encounter was, perhaps, a rowdy bar brawl after hours. Nevertheless, I dreamt of a Jamaica where neither police nor criminals had guns.

With all the mess coming out of the Firearm Licensing Authority scandals and the Patrick Powell missing-gun case, it's clear that we haven't even got the monitoring of legal guns figured out. Not to mention all the theories about how illegal guns get into a country that doesn't manufacture guns. The number of people, innocent and otherwise, that die from gunshots in this country is lunacy.

I though about this gun business a lot over the weekend. My hate for them is no less, but my hate for those who pull the trigger is greater. The mother in Rockfort doesn't fear a gun; she fears the gunman. The only reason I want a gun in my house is to protect me from gunmen. O the irony!

So now I take it back. My hate isn't purely for guns. It is the evil spawn who fire the gun that are the real cancer to Jamaica. My new conclusion: Some humans are the worst things to ever happen to humanity. And gunmen head the list. Every one of them is a poison, and they and their guns are ruining the world for the rest of us.