Orville Higgins | WI in England : a lost cause 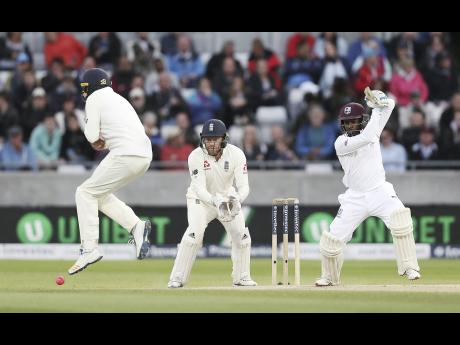 AP
West Indies' Jermaine Blackwood drives into the off side on Day Three of the day-night Test match between England and the West Indies at Edgbaston in Birmingham.

Australia-born West Indies coach Stuart Law is learning the hard way that directing the West Indies team is like the proverbial poisoned chalice. Over the last two decades or so, many coaches have taken on the job of trying to get the West Indies back to the top of the Test charts and have found out the hard way that they may have bitten off more than they can chew. If you want to get stripes on your rÈsumÈ as an international cricket coach, taking charge of the West Indies Test team may not be the way to go about doing so.

If we want to be fair, the truth is that in recent times, the West Indies are prepared to fight. I remember times in the not-so-distant past when the team would surrender meekly, with the players giving the impression that they have no stomach whatsoever for the fight.

This current crop has shown the propensity to buckle down and try. Certainly, over the last 18 months or so, you get the feeling that they are putting in an honest shift. You feel that when they lose, it is because of technical deficiencies, but not for a lack of effort.

I have come to appreciate the fact that we were at least competing in Test matches. We were pushing games into day five and letting the opposition know that they had to work to win. Which is why that first Test loss against England was so difficult to swallow.

Being beaten inside three days, especially when there were rain interruptions, is disappointing. Losing 19 wickets in one day is unacceptable. Let's face it: The West Indies are not going to beat England in England. South Africa are a much better Test team than the West Indies, and they were thrashed 3-1 by England just prior to this West Indies tour.

England, in their own conditions, are probably as tough a cricket assignment as there is at the moment. Not even the most optimistic West Indian fan could see anything but a win for England. Not in this manner, though.

Geoff Boycott says ours is the worst Test side he has seen in 50 years. I'm not sure I agree. In the early stages of Zimbabwe, for example, they were not winning anything. This team has shown that they can win Test matches, but I understand why Boycott would make such an emotional statement.

Curtly Ambrose called the performance "embarrassing" and "hard to watch". Ambi may still be fuming over his dismissal as a bowling coach, but he wasn't wrong. This was a limp display. Only Jermaine Blackwood came out of it with any pluses. His defiant, counter-attacking 79 not out in the first innings showed that the selectors were completely wrong to leave him out of the Pakistan series.

West Indies are not a great Test team, but sometimes we make it worse on ourselves by some rather bizarre decisions. Leaving out Blackwood in our last home series was a mistake. This is not me being wise after the fact. I was among those who said it from day one. His replacement, Hetmyer, batted at three. Blackwood was asked to bat at six in the first Test. I'm not sure why a debutant should be asked to bat three while Blackwood is batting at six. Had he batted earlier, he probably would have scored another Test hundred.

West Indies will need some inspiration for the second Test. There must be changes to the bowling department. They need either Gabriel's pace or Bishoo's spin, or maybe they have to find a way to get both into the team.

The captain, Jason Holder, looked a little shell-shocked. His batting and bowling were ordinary and his captaincy wasn't inspiring. No one can explain why he didn't take the new ball as soon as it became available under the floodlights with England coasting along. Holder has a hard job. He is leading a team that is not accustomed to winning too many games, and at times it appears the pressure is taking its toll.

There is no reason to feel anything will be different in the second Test, which starts this weekend. The West Indies have not won a Test match in England in 17 years, and it would be a brave man who would bet for this to change. Indeed, the West Indies have won only three of their last 87 Tests away from home against opposition not including Zimbabwe and Bangladesh.

People like former England skipper Michael Vaughan and our own Michael Holding are talking about a two-tiered Test format. Another loss like the first Test and those cries will be louder. The West Indies have a mountain to climb.