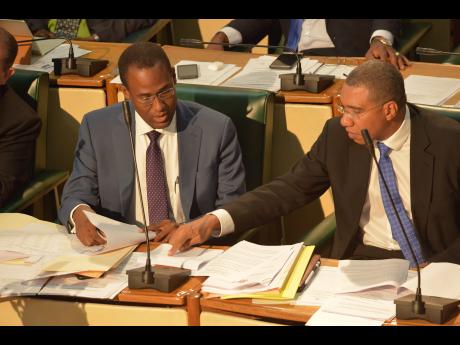 In the interest of full disclosure, let it be known that I am an ardent support of the Holness administration. There are a lot of things for which I commend this administration, but when it comes to growing the economy, it has been abysmal.

Granted, they inherited a constipated economy, but this is no excuse for their abject failure. We are now in the third year of this administration and we will not see even 2% growth. There should have been no surprise as to the challenges in the economy, and one would have assumed that a prudent Government would have had a realistic plan to get the economy growing at its true potential, which is north of 5%.

If there is a plan, it is not working, and it will not work at the rate at which we are going. We all have to agree that 1% growth is unacceptable. There is a perception of official apathy. It is charitable to say the current growth rate sucks.

When is this Government going to have its eureka moment? Growing the economy is not performing brain surgery in the dark. it is elementary. Other countries have effectively grown their economy. Since 2006, Ethiopia has grown its economy by 277%, and Rwanda by 270%, with a projected average trajectory of 6.1% through 2022.

Look at Paraguay. A new government in 2013 was able to grow the economy at an average rate of 6% between 2013 and 2017. Since 2010, more than 200 new companies have set up operations in Costa Rica. It would be nice to know why Jamaica is unable to achieve similar growth.

The problem with this administration is its constant use of the PNP as its economic barometer. The Holness administration is using the lowest denominator. It should use the global growth rate of 3.7%, or better yet, the emerging market at 4.9%. The PNP has demonstrated that it is allergic to growth.

The administration has an Economic Growth Council, yet Jamaica cannot grow 2%? What purpose do they serve?

This administration seems to be more interested in passing IMF tests than growing the economy, and the IMF is only focused on fiscal prudence and debt reduction. Growing the economy should take precedence over pleasing the IMF.

The draconian terms imposed on Jamaica were/are unnecessary. Why did the IMF impose a 7.5% primary surplus? Why weren't the same terms imposed on Greece, Cyprus, and Ukraine? Their economies were in worse shape than Jamaica when they entered agreements with the IMF, yet their primary surplus requirements were in the 3% range. It is obvious that the IMF terms with Jamaica are arbitrary, and, some would say, capricious.

The IMF has inhibited the productive capacity of the country and blighted development prospects. It is time for the administration to stop kissing the feet of the IMF and refrain from taking refuge in their arrogant assumptions.

What were the responsibilities of Nigel Clarke, the up-to-recently loftily titled ambassador plenipotentiary for business, outside of negotiating IMF pacts? He is the most famous ambassador nobody has ever heard of. The ambassador needs to be an advocate and evangelist amplifying Jamaica's comparative advantages. He should be nurturing and cultivating relationships with CEOs and CFOs. How many of these CEOs and CFOs know that Jamaica has a business ambassador? How many of them has Clarke, now the finance minister, corresponded with?

Two events the Jamaica business ambassador should never miss are the JP Morgan Healthcare Conference in San Francisco and the CES show in Las Vegas. Both occur in January. This is where you go to build relationships. The companies he may want to start with are Merck, Medtronic, J&J, Mastercard, and Unilever.

Productivity is the elixir for the economy. It can easily add 2% to 3% growth to the economy. Enhancing productivity throughout the economy could immensely get it out, its comatose phase. This is the antidote Jamaica needs. There has to be a greater emphasis on productivity, especially within the government agencies.

There is a lot more the banking industry can do to help the economy. They are not helping in making credit available to the needy sectors of the economy. Access to capital is still severely limited.

The telecom companies are not fully deploying the technology to maximise the productivity of the country. Broadband should be ubiquitous. Most folks in the rural areas are underserved. There is a need to provide more leading-edge technology. They need to look at what Millicom is doing in its territory and how it is helping to grow the economies in the countries they serve.

There is major revenue leakage that needs to be addressed. It is estimated that between 30% and 35% of the country's revenue goes uncollected. There are too many people in Jamaica who are not paying their fair share of taxes. They are constantly exploiting the system, and there seems to be no consequence to their actions.

There is a need to eliminate the wasteful patronage on which the venal elite feast. Can anyone identify any tax cheat who spent time in jail for tax avoidance? The administration should be more aggressive in going after tax cheats. They should be subjected to the 50:1 rule: that is, for every million dollars you cheat, the penalty should be $50 million, plus jail time. It looks as if Jamaica is a country consecrated to democracy but baptised by plutocracy.

The manufacturing sector is being treated with neglect. Over the years, there has been evisceration of the manufacturing base. This sector can contribute significantly towards the growth of the economy. As a per cent of GDP, the Government should aspire to 15%-20%.

The current trade war gives Jamaica a unique opportunity to expand its manufacturing base. Given the elevated trade deficit, Jamaica should be able to attract many companies, especially those from Asia, to establish plants here. Jamaica needs to realise that the world is its fulcrum, and it should be prepared to leverage it. More emphasis should be placed on exports.

There has to be equilibrium between consumption and investment. The country needs a major increase in both public and private investment. Over the next five years, there should be a minimum foreign direct investment target of $1 billion per year. Jamaica should be looking at how best it can exploit the incremental capital output ratio. This can substantially elevate the growth in output.

I am supremely confident that the Holness administration has the potential to alleviate the economic spasms in which the country finds itself. It just needs to show a sense of urgency and boldness.

- Delroy Warmington is a global fund manager. Email feedback to columns@gleanerjm.com and dlwarm2001@yahoo.com.