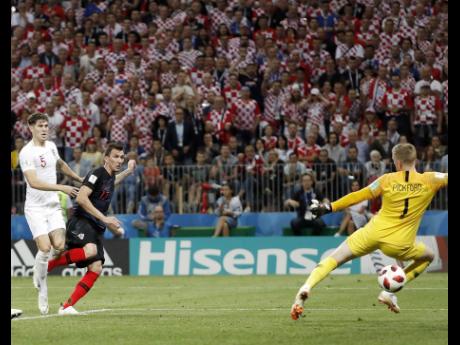 I am not sure whether they were discussing the Maracana football stadium in Brazil or one of the many sordid "revelations" about the sex lives of some of the more prominent football stars on display at this year's World Cup which ends tomorrow, Sunday, July 15.

It was in a restaurant and I was seated next to a mixed group celebrating a Brazilian victory that would take the team to the quarter-finals. "Size is not everything," the lady slurred a little bit, "it is the only thing." "That leaves me out," I said to myself, and added for consolation, Donald Trump and the Brazilians since the biggest football stadium in the world is the Rungrado May in Pyongyang, North Korea, which has a floor space of 2.2 million square feet and holds 114,000 spectators. Take a bow, Kim Jong-Un, and when next you think about the beautiful game, consider how tweet it is to have a size advantage on the Americans and their president.

This leads to a World Cup issue that has generated some controversy with me and other West Indians. The question is whether the size of a country is determined by its population or its land area. Iceland has an area of 103,000 square kilometres or 40,000 square miles and a population of 348,580.

Despite this, the media have been referring to Iceland as the smallest country to ever qualify for the World Cup without ever clarifying what they mean by 'small'. It reminds me of robot minivans in Jamaica or ZRs in Barbados. Regardless of how many people the combination of touts and drivers manage to cram into the vehicle, you wouldn't call it a Maxi.

The bigger issue is whether Bob Marley was right when he put into song a saying that all Caribbean people are familiar with. Jamaicans say that "a little axe can cut down a big tree". Barbadians put it slightly differently, "It don't tek a big axe tuh cut down a big tree." "Small axe does cut dong big tree," Marley sang. "If you are the big tree/ We are the small axe/ Sharpened to cut you down (well sharp)/ Ready to cut you down."

Vincentian calypsonian Becket popularised a more pointed version, "Small pin does jook hard." So was it size or really the lack of it, whether in terms of population or land space that kept Jamaica, Trinidad & Tobago and now Iceland down and out? Yet the comparisons continued into the semi-finals where the disparities in sizes, both in land area and populations, were more stressed than the players.

But like Uruguay in 1930 with a population of 1.75 million and the second smallest country in South America after Suriname, a small axe hacked England to pieces on Wednesday and is now poised to do a Marley on France or, for that matter, a Becket. Or even a David to France's Goliath.

It is a pity that Belgium did not get through to the final to make it a matchup of minnows. However, we do have the opportunity to see whether Croatia and their hatchet man Luka Modric can do for his country what he has done for his club, Real Madrid, and to the French what he did to England.

Even the British Guardian newspaper was not parsimo-nious in its praise of Modric, describing him as a "miracle worker who reminds us space and time do exist" and that "at a World Cup where everyone with the ball seems to be in a hurry, the Croatia midfielder's intelligence and gifts stand out - as does his dignity".

Not since the days of Zinedine Zidane has France been as strong a contender as it is now. It has reached the final as the big tree of the competition, and for its supporters, it is a case of only Yew, the national tree of the country. The French team manager, Didier Deschamps, has said that his players can write "the most beautiful page" in the football history of their country when they face Croatia on Sunday.

While, as comedian Nick Hall says, the Russians would be enjoying the last few days of being able to stand in a crowd and wave flags without getting arrested or sent to Siberia, jokes about the French and the Croats have replaced the many English, Argentine, Russian and German jokes as well as the surfeit of Neymar memes.

However, one Russian joke is still around. "The Russian player who missed the crucial penalty against Croatia has been invited to visit Putin in his secret volcano base so he can give him a personal tour of his new shark tank."

There is an Argentine joke lurking: "Argentina's abysmal performance in the World Cup received plenty of snorts from their fans, particularly Diego Maradona."

The joke that the difference between a Wonderbra and the French football team is that a Wonderbra has decent support and a cup is still around, perhaps until Sunday. However, the final might be a walkover if the Croatian team selected by the self-styled eighth Funniest Man in Sweden, Olaf Falafel, hits the field with "Modric, Sandwic, Sausic, Feverpic, Quiddic, Sonofabic, Wickedwic, Glic, Glic, Glic and Ostric."