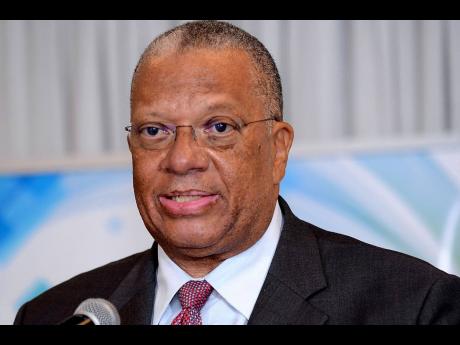 Generally speaking, the efforts to bring public sector costs in line with available resources have not had success.

While there can be no doubt that we need to be realistic in ensuring that public sector costs are contained within a range that the country can afford, it is clear that the precise wages to gross domestic product (GDP) target is only likely to be honoured in the breach.

Approximately 80 per cent of the public sector wage bill is for our police, teachers and medical personnel and yet in each of these areas, there is a need for more personnel.

Take, for example, the security forces, here we have Jamaica with one of the highest rates of murder and violent crimes in the world, and yet:

• At a ratio of one officer for every 266 citizens, the ratio of police to the population is one of the lowest in the Caribbean and

• The police force is under-manned by approximately 25 per cent.

However, the issue with the police is more than just numbers, the reality is that we need more numbers with higher levels of training who are more effectively equipped.

Similarly, the case can be made for education and health, both of which require investments in personnel to enable key areas critical for sustainable growth.

As far as education is concerned, the situation is even more urgent than we realize, as recent IBRD estimates indicate that some 70 per cent of the labour force has no certification.

With these circumstances, how can Jamaica become a competitive environment?

One obvious issue that immediately arises, and around which a good social consensus can be built is:

In the context of improvements in public sector debt relative to GDP and expanded fiscal resources, how are we going to focus those fiscal resources on the most urgent needs?

In our view, there can be no greater claim, and I hope to see it in the upcoming budget, than focus on education and security.

The government needs to resist the penchant for spending on political goodies and instead focus on the fundamental reform needs:

• Far more police to be recruited

• More and better equipment to be provided

• Equipping ALL schools with relevant technology and other equipment to produce graduates that can compete anywhere and help drive sustainable growth.

As the significant cost of corruption is an impediment to Jamaica’s inclusive and sustainable growth, a continuing focus of Public Sector Reform must be on the delivery of good governance.

The recent disclosures in Jamaica in relation to Petrojam, NESOL, USF, not to mention UDC and Local Government reveal:

• Hiring practices that went outside of public sector norms, rules and guidelines

When there is the reputation for existence of corrupt behaviour within the state, with the apparent complicity of high public officials, the result is usually weakened public confidence in institutions, generally, and in public sector reform, in particular. Not to mention that it destroys the investment climate and reputation overall for Jamaica as a serious place to do business.

If investors find they have to drop money to get building approvals, or that contracts are only given to connected people who will be protected from firing, it will inevitably have negative consequence on our ability to grow as a country.

HOW DO WE COMBAT THIS CORRUPTION?

1. Firm leadership needs to be exercised. It must be made clear that there will be no tolerance at every level.

a. Ministers in breach need to be dealt with decisively

b. Chairman of Cabinet needs to ensure no improper contracts are awarded in Cabinet

2. The ultimate guarantor of good governance in any democratic state is high quality investigative agencies who exercise their powers against all who break the law, irrespective of their status or position, whether they hold high office or are junior employees.

The problem with Jamaica is that too often people, with justification, feel that only the lowly are apprehended and brought to the courts when serious breaches occur.

3. Increasing transparency in the operations of agencies has long been known to be a good antidote to corruption in government.

4. The time has come for representation on public boards to come from the wider society through an appropriate process of competitive application, which can be invigilated by a Public Service Commission.

This commission would select people with the appropriate expertise and competence to sit on public boards, so that they don’t simply become the bailiwick of politics.

Public Sector Reform is still very relevant but the focus and objective have to be appropriate to drive the development Jamaica needs and access the best expertise.

Public sector efficiency is still much too low.

Decisions for building approvals or transfers of land or tax matters still take too long.

Nevertheless, the really difficult tasks relate to our fundamental institutional arrangements in the delivery of education, security and health at a level which meets the legitimate expectations of the people and drives sustainable growth.

These are the really difficult tasks for which we must have fixity of purpose.

* Dr Peter Phillips is the leader of the opposition People’s National Party. Email feedback to columns@gleanerjm.com