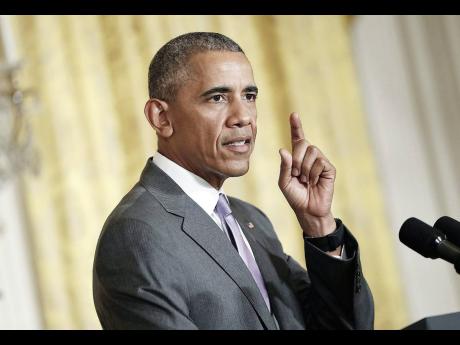 In examining the significant gains in employment that the country has enjoyed recently, as well as paying attention to the nature and character of our unemployment, especially youth unemployment which remains stubbornly high, two quotes from two brilliant men come to mind.

Marcus Garvey said, “a people without the knowledge of their past history, origin, and culture is like a tree without roots. Emancipate yourselves from mental slavery, none but ourselves can free the minds.”

On the other hand, President Barack Obama offered the following, “change will not come if we wait for some person or some other time. We are the ones we’ve been waiting for. We are the change that we see.”

The country is sometimes hesitant to applaud its own achievement. There is no question that there could be a mild patting on the back, as Jamaica recorded what finance minister Dr Nigel Clarke called robust employment numbers.

This is remarkable, something borne out by the following statistics, wherein 14,400 more people were employed at the end of October 2018 than the previous October. Women had the larger percentage of this total, gaining 10,100 jobs to the men 4,300.

Interestingly, during the year ending October 31, 2018, the occupation group – professional, senior officials, and technicians – had the largest increase in employment of 3,800, up 3.1 per cent to a total of 261,800.

Notwithstanding the gains in the employed labour force, last week’s Sunday Gleaner carried three Career sections. The opportunities available were varied and widespread.

The public sector needed a lot of people, including many professionals and high end consultants.

The private sector, based on the plethora of positions listed, seemed desperate to tap into an available talent pool, which might have been inadequate. Some ads even signaled an SOS, with the word urgent in bold letters.

As for the range of industry groupings, from agriculture to manufacturing, from health to transportation, the demand for specialized skills, professional talent, and executive management, seemed limitless.

The long list of employment opportunities underscored competence, determined by a combination or mix of experience, knowledge, skill, education, training, and application.

Many higher order and skilled positions remain unfulfilled and this is so, even with youth unemployment, ages 14 to 24, being as high as 24.9 per cent at the end of October 2018.

With that number and many current jobs being filled by entry-level applicants, we have to ask whether we are capable of emancipating ourselves.

Garvey posited his famous quote about us emphasizing our past and emancipating ourselves nearly 100 years ago, but a critical component of Garvey’s thinking was his emphasis on knowledge and education, which eventually translates into work, output, productivity and performance.

I sometimes worry whether our preoccupation with a past that seems to let us feel forever entrapped does not limit us. We over emphasis equity and justice to the detriment of growth and development, we elevate freedom and rights, oftentimes eclipsing discipline and relevance.

SACRIFICES NOT IN VAIN

Garvey, and many before him, sacrificed and died to ensure our liberation, dignity, and self worth. At some point we have to recognize and attach a reward that their ultimate sacrifices were not in vain in diminishing the effects of slavery and the plantation system.

We can’t forever cloak ourselves in an excuse-driven thought process which allows us as individuals, government, and the private sector, to make bad decisions, then tie everything to disadvantages arising from slavery, imperialism, and colonialism. We must accept that sacrifices have been made and at some point an evolution has to occur to facilitate progress.

One just has to look at the amazing achievements of first and second generation Jamaicans, and for that matter, Caribbean people, who started with nothing. Some would be embarrassed if they gave you an insight into their beginnings and their life story, but they were committed to making it, and most did.

We have to emancipate ourselves and none but ourselves can free our mind. Once there is that breakout and self confidence, we must realize change will not come if we wait for some other person or some other time.

In fact, in so far as Marcus Garvey was a visionary and an entrepreneur, we could literally twin Obama and Garvey, while articulating Obama’s words that “we respect the past, but we don’t pine for it; we don’t fear the future, we grab for it.”

MANY STUDENTS IN A TIME WARP

But change will not come if many students under the rubric of intellectual freedom believe that gives them the right to study what they want or like and then end up at graduation bemoaning the fact that they can’t get a ‘proper job’ despite sending out many applications.

Many of our students are in a time warp regarding work, employment, the pace of change, and the reality of data, technology, financial economics, mathematics, wealth-creation, and the digital revolution.

It is good that our unemployment rate, which has been trending down over the last few years, is now at 8.7 per cent. But for us to make our country’s growth and employment numbers truly meaningful, we have to make sure that as President Obama says, “every child get’s an education suitable to this century, one that expands imagination and lifts their sights, and give them skills.” And we must remember “we are the ones we have been waiting for. We are the change that we see.”

We have to be the innovators, the entrepreneurs, the workers, the persons with the high valued relevant skills to remove skepticism in the quality of our employment numbers. As Garvey says, “progress is the attraction that moves humanity.”

- Mark Ricketts is an economist, author, and lecturer.

Email feedback to columns@gleanerjm.com and rckttsmrk@yahoo.com