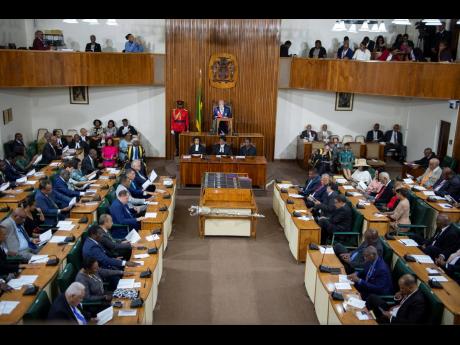 Gladstone Taylor
Believe it or not (by Ripley), a switch to direct elections for PM and a Cabinet independent of (but vetted by) Parliament is an anti-corruption weapon, as de facto control of scarce benefits/spoils’ distribution will be removed from MPs.

As reports of governmental corruption continue on the rise, Jamaica’s need for constitutional reform has reached emergency levels.

Without radical constitutional change aimed at limiting opportunities for bad governance and increasing the likelihood of effective sanction, Jamaica is faced with an irresistible force/immovable object dilemma. The force is citizens’ lobby for good governance; the immovable object, government corruption.

Trust me, there’s an answer. The immovable object always wins. I know.

While the Old Ball and Chain was with her boyfriend, Jim (she spells his name ‘Gym’), thus leaving me unsupervised, I tried to unscrew the bottom of her mixer (used to make her morning ‘shake’) to wash the parts separately. I broke two fingers (based on my ‘painometer’ and contrary to X-ray evidence).

So we must circumvent the immovable object by providing for corruption to become vulnerable, preventable and reversible. It begins with the sole discretion handed to a prime minister to name a shape-shifter Cabinet from lapdog members of Parliament (MPs) with nothing to do otherwise but bang on parliamentary desks.

Cabinet changes faces and responsibilities whenever PM has an itch. He/she simply scratches and, voila, more ‘ministers without portfolio’; a created ‘ministry of economic growth’ separate from finance and God only knows what else.

Before you can quint, ‘ministers’ are delivering planning permits to developers at public ceremonies and PMs participate in groundbreaking photo ops, while growth remains negligible; jobs play hide-and-seek with tertiary graduates; and corruption flourishes.

Believe it or not (by Ripley), a switch to direct elections for PM and a Cabinet independent of (but vetted by) Parliament is an anti-corruption weapon, as de facto control of scarce benefits/spoils’ distribution will be removed from MPs.

Suddenly, those seeking such control won’t want to be MP candidates. Only those genuinely interested in representation need apply and this will ensure that people with questionable antecedents aren’t confirmed to Cabinet.

A constitutionally entrenched succession to incapacitated PMs that places the Speaker high on the list will also ensure stronger leadership in Parliament, as MPs realise they’re selecting a possible prime minister and not simply offering a sinecure.

I’ve proposed the constitution should limit outlets and opportunities for corruption, including by specifying a maximum number of ministries and outlawing ministers ‘without portfolio’.

We keep copycatting England and hoodwinking Jamaicans into believing Westminster should be imported wholesale. But United Kingdom (UK) population is over 53 million; Jamaica’s less than three million.

1. MINISTRY OF NATIONAL SECURITY AND DEFENCE

Why are these ministries separate? There’s no real prospect of needing the military to defend against external forces. Who do we expect to invade? Lime Key?

Currently, police and soldier are used as one. PM’s major (no pun intended) complaint about non-extension of states of public emergency (SOEs) was the removal of police powers from the Jamaica Defense Force (JDF). This pretend separation must stop so that we can move towards inculcating military discipline/accountability into the Jamaica Constabulary Force (JCF).

The justice ministry is redundant. The attorney general should be a constitutional officer with prescribed minimum qualifications nominated by PM and vetted by Parliament or appointed by agreement with the Opposition Leader (LOO). That officer should neither be Cabinet member nor MP/senator, but an independent adviser to the Government’s solicitor general, especially regarding the constitutionality of proposed legislation.

The Supreme Court should be unconnected to Cabinet, operated by the Chief Justice’s (CJ) office, and submit an annual budget for approval like any other agency. Judges should be appointed by CJ after vetting by a panel of senior judges. CJ/Appeal Court President (ACP) should be nominated by PM after consultation with LOO and vetted by Parliament. This process should begin one year before any anticipated retirement of either. Other temporary vacancies can be filled by CJ/ACP after consultation with senior judges.

Why would culture, youth or sport be separated from ‘education’? More pay cheques for loyalists?

There’s a link with the Ministry of Social Security (see below). Social security, properly so-called, includes ‘job creation’. ‘Education’ that doesn’t prepare youth for those jobs isn’t education. Jamaica’s population is less than three million. How many of these are ‘youth’? Jeez, Louise!

3. MINISTRY OF HEALTH AND THE ENVIRONMENT

Sanitation MUST be included in this portfolio. In which universe are the nation’s sanitary levels not directly related to its health?

This ministry must include fiscal policy; growth; and all revenue earning agencies of government.

Can we change the name to discourage satirists like me? Americans just call it the State Department. Anyhoo, once we’re talking about interaction between or among nations, this is where it goes. Trade issues between nationals of different countries don’t belong here.

6. MINISTRY OF TRADE AND INDUSTRY

Sigh. Can we get this one straight once and for all? Tourism is just another industry, as is agriculture and fisheries. Mining too. And entertainment. This should be a ministry of ALL industries.

Why a ministry of ‘Labour’? Is ‘labour’ more important to national growth than ‘management’? Why not focus on ‘social security’, hence emphasising workplace harmony. Appropriate focus on ‘labour’ would prioritise job creation, which is the first step towards REAL social security.

Real social security won’t be achieved until Cabinet devises and implements policies to ensure senior citizens’ welfare. This includes free healthcare (NOT ‘no user fee’) for unemployed seniors. I don’t want to hear any complaining about this. Seniors are people who worked hard all their lives and paid taxes so ministers can wave flags at Olympics and ‘roam’ worldwide. Jamaica owes them REAL social security.

8. MINISTRY OF TRANSPORT AND WORKS

This is another vital ministry. A comfortable and efficient public transport system would eliminate much of the mayhem on Jamaica’s roads and contribute to growth through increased productivity. This ministry should ensure safe, secure, properly supervised school bus systems and provide free public transportation for senior citizens. WHY ARE WE PAYING TAXES?

With the National Works Agency (NWA) falling under this ministry, we must connect public transport with roads upon which to operate it.

I can’t emphasise how much senior citizens welfare contributes to overall peace and security. This should be a major part of the ‘social intervention’ touted by zone of special operations (ZOSO) and reduce future need for extreme policing. There’s no point trying to convince youth to eschew crime if they see the country treating seniors like trash. Youth may be undereducated but not stupid. They know, unless they turn to crime, thus live hard and die fast, they’ll be old one day. Is THIS how they want to be thanked for doing the right thing?

9. MINISTRY OF LAND, HOUSING AND INFRASTRUCTURE

This combo ministry can address squatting, housing solutions and infrastructural developments unrelated to transport. Land reform should be a priority but not on the basis of giveaways.

Together with PM, that’s 10 Cabinet members.

Why’d we need any more? local government ministry is a blatant tautology. If we must retain local government, have mayors directly elected and allow parish councils to levy local (for example, property) taxes to fund operations. I prefer to reduce each constituency’s size and increase the number of MPs.

Government agencies would be supervised by ministers. Senate should be elected, not appointed at any individual’s whim.

Governor general should be abolished along with the queen and privy council.

These things are crucial, despite public political ‘analysts’ not recognising where we are.

I heard Luke Cage on radio recently accepting praise for voting PNP and JLP in the past and pompously announcing, “I voted for JLP in February 2016.” Jeez.

Does he hear himself? Does he even know what he said? Under our anti-democratic system, we’re only allowed to vote for our choice for constituency representative (MP). Because voters’ input is so savagely restricted, they use their only participatory tool to “vote for JLP/PNP” to form government obeying Busta’s antediluvian edict, “If I send a dog down here, you haffe vote for him.”

Don’t you want to vote for the candidate you feel would best represent your constituency’s interests, regardless of his/her party affiliation? And to fire him/her by popular vote if he/she fails to perform without having to wait for PM to call another general election?

Don’t you want to also be allowed to vote for your choice of government? Don’t you want all elected officials subject to impeachment? Why do YOU think neither party wants this?

Do we want a new Jamaica? Then let’s pull our fingers out and get the show on the road!

n Gordon Robinson is an attorney-at-law. Email feedback to columns@gleanerjm.com