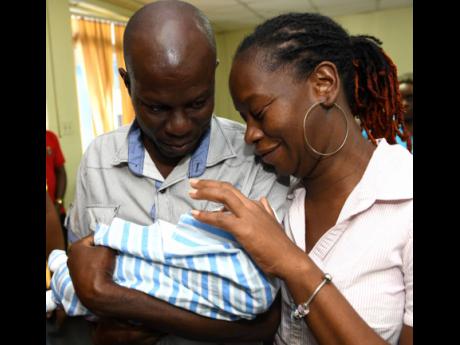 Ricardo Makyn
A father, Sinclair Hutton, holding his son, Sae’breon, while mother Suzzett Whyte shows tender love at the Denham Town Police Station in Kingston minutes after the baby was returned to his family by the Child Protection and Family Services Agency. The baby had been stolen from the Victoria Jubilee Hospital.

Mara came to see me on Jamaica Day, the day when the nation revels in the goodness and prospects of our ‘livity’ – our way of life. She was raised in the country by relatives because her father no deh bout and her mother gone to look life in Montego Bay. A pretty black girl, understandably too fat, given that she, like most of those in the inner-city, eat whatever they can get rather than what is good for them. Jamaica Moves can’t really help her.

Mara will be 19 this year. She has three children. They have three different fathers. The first guy, like her own ‘dad’, is nowhere to be found. That was when she dropped out of school. The family of the next child’s father has mercifully taken that daughter to raise, but it has meant that Mara has no real contact with her anymore. Her last (latest?) babyfather “helps now and then”.

Mara has no subjects but speaks well and softly, so she got a little cashier’s job which allowed her to rent a room for the two children and herself. She really tried putting her life together, but now the business has closed and, despite the efforts of the church which she was sensible enough to join and which gives her a little food sometimes, she has had no income going three months now and on Jamaica Day, having left the babies with a church sister, without feeding, while she tried out for a job, she knows she cannot return home without the rent money, which has accumulated.

She is crying softly now, no longer able to control the hopelessness which she is conveying to us – people who are at least listening, but who are asking a whole heap of questions and appearing sceptical and even accusatory. “Whey yu fadda deh? Why you tek up wid so much man? Why you never dash wey di belly? You neva know ‘bout birth control …?”

In cases like this, there is no state agency to which you can refer anyone on a Friday afternoon. Even if they were open for business, it would likely take weeks for the meagre assistance to flow. Please don’t even mention PATH with all its regulations and strangling bureaucracy – the kind that don’t apply to money-spending at Petrojam.

Well, Mara got the rent and food money she needed, as well as a place in a training institution where she will resume her education, with a crèche for her baby, where she can gain a skill, earn a small stipend and hopefully get a job.

There are tens of thousands like Mara and more coming on the scene every year. Thank God for the Women’s Centre, Mustard Seed, Missionaries of the Poor, the Adventists and many other charitable groups. Blessings, too, even to the political representatives who, when they help, are accused of corruption or of confusing social work with politics.

Hello..! Through the searing, narrow prism of Mara’s story, I am thinking about the huge national Budget, the exploitative and broken financial mechanisms, the wasteful output gap and more – all profoundly moral and theological processes, and how they impact but inadequately address the situation of weak families, absent fathers, oppressed mothers and criminally compromised, innocent children.

Mara and her children have little to hope for from the Government, but they would do much better if they had a father resident in the house and preventing the inevitable inter-generational social decline. The little ones chances of getting reasonable nutrition, benefiting from available educational opportunity, avoiding early pregnancy or gang initiation, all would be massively improved by stable two-parent family circumstances.

But that has not been part of Mara’s education nor is it a dominant theme of Jamaica Day. In fact, last week The Star featured a very popular video artiste who, celebrating her ‘freedom’ and self-acknowledged sadomasochism, with legs wide apart, said that she couldn’t wait to perform her act “at the school fetes”.

This is what Mara’s generation has been exposed to. The dysfunctional consequences are staring at us in the sad faces of her daughters. It is impossible to craft prosperity without a restored family culture. Nurturing social order is what we should be spending on.

Meanwhile, Parliament still can’t get around to legislating that the father’s name should be entered on every child’s birth certificate.