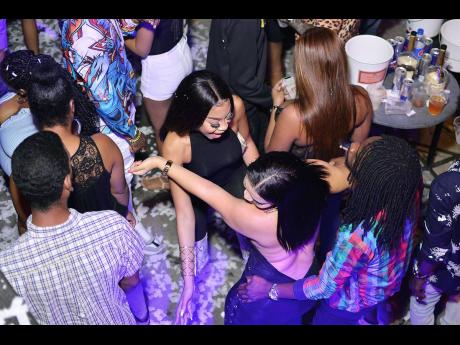 Jamaica’s never-ending love-hate relationship with dancehall, a unique and fascinating feature of our country which has given us much acclaim, is on display once again.

Last week, a scathing letter to the president of The University of the West Indies (UWI) Mona Law Society from attorney-at-law Peter Champagnie, about some raunchily ‘inappropriate’ photos on their social-media pages, which depicted dancehall’s fashion for the annual Mr & Miss Law competition, was made public.

Unsurprisingly, it has caused (once again) a much-needed public discussion about our treatment of dancehall, which many artistes have talked about in their songs, on social media and in countless media interviews over the years.

Vybz Kartel summed it up quite eloquently in his intriguingly informative book, Voice of The Ghetto.

A number of people, including some of Champagnie’s learned colleagues, have commented publicly about the matter in favour of the young women who were scolded for partaking in something so harmless.

Since the publication of the letter, all sorts of emboldened pietists, including those who depend on the lewdest of dancehall songs to put some spice in their coitus and keep them alkaline, have come out of hiding, laden with grief to complain about how ‘vulgar’ dancehall is.

I suppose my friend Glenroy Murray is right – “Dancehall is the parts of ourselves that we are ashamed of.”

Part of our difficulty with dancehall, the ghetto and other aspects of our Jamaicanness that we consider distasteful is that those of us who made it were taught that rejecting these features and ways of being is THE only way to make it, to be like and fit in with the folks we consider to be more important than us. It is partly why we see such terribly problematic sentiments by so many whose idea of success is to steer far from ‘certain people’ and belittle them.

I suppose it must be distressful for the educated Jamaicans laden with superiority complex that the Jamaicans who help to make us so renowned and so loved are quite often the supposedly poor dunce ghetto bleach-out face caylis people who dem feel dem better than.

It’s the only explanation I can think of for the ludicrous and vulgar attitude towards something that is undeniably a part of who we are and how we are. Those far removed from dancehall are in the minority and are usually more embracing than those who the sound systems and proceeds of dancehall helped to grow into such ‘decent’ citizens.

The timing of this could not have come at a better time, though. In two months, barely clothed men and women will parade themselves on the streets of the Corporate Area for Carnival Sunday. Some of these same individuals who find dancehall unrefined will hasten to defend their ‘right’ to dress skimpily with nary a concern for their hypocrisy uttered about dancehall that’s choking them to death.

I sincerely hope we will be able to reconcile our personal conflicts with dancehall soon, that we will appreciate that we can be professional, decent, law-abiding citizens who listen and enjoy dancehall music and might, on occasion, don attires associated with dancehall culture as well.

In all of this hullabaloo, let us be careful in our commentary about the Mona Law Society, as we use the context in which they took the pictures to suggest no offence was committed. It gives the idea that outside of performance, it would not have been okay for the students to enjoy our music and culture; that it would have otherwise been vulgar.

It’s time we realise that it is perfectly okay for professionals, women especially, to participate and enjoy dancehall as music, culture and space without it being a performance. It’s not vulgar – even if they’re in a battyrider, fishnet stockings and a shocking colour wig. It’s okay and normal as it is okay and normal for them to be in feathered bikinis on the streets for carnival.

We need to recognise that the adult men and women who are a part of dancehall are adults and do not need to be reprimanded by anyone for doing perfectly okay adult things.

Stop demeaning women (and men) who so daringly embrace dancehall, who publicly broadcast to us how much they love it. Stop belittling them because you do not want to embrace, enjoy and celebrate dancehall in the way they have.

Jaevion Nelson is a human-rights, social and economic-justice advocate. Email feedback to columns@gleanerjm.com and jaevion@gmail.com or tweet @jaevionn.