Garth Rattray | From POTUS to ‘putus’ 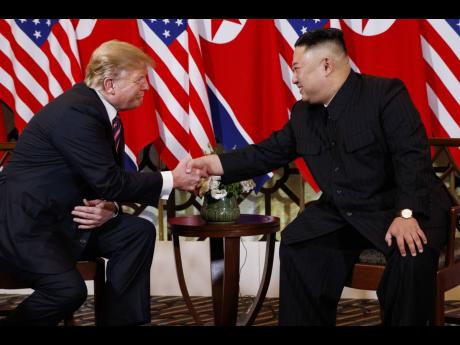 And, the day before the Democratic National Convention, Wikileaks published 20,000 internal emails that were stolen by them.

To add insult to injury and treachery to dishonour, during a nationally televised speech, Trump publicly invited the Russian hackers to target Hillary Clinton’s personal email server. He said, “Russia, if you’re listening, I hope you’re able to find the 30,000 emails that are missing”.

Trump has always been chummy with the Russian president, Vladimir Putin, and openly expressed his admiration for him. Trump praised Putin by calling him “very smart, a stronger leader than Barack Obama, very tough, no-nonsense, doing a great job of outsmarting our country, intelligent, stablemate, highly respected within his own country and beyond”…among others.

Their relationship was dubbed a bromance – a close, exceptionally tight, affectionate, non-sexual relationship between two or more men.

The citizens of some European countries, angered by the praise being given to a leader who they see as iron-fisted and dangerous, have gone as far as displaying caricatures of Trump and Putin embracing romantically, with the Trump character dressed as the female partner.

More recently, however, if we are to continue the ‘bromantic’ theme, Trump has been cheating on Vladimir Putin with Kim Jong-un, because Trump recently made this rather nauseating statement about the North Korean dictator publicly, “…we were going back and forth, and then we fell in love…‘kay…no, really! He wrote me beautiful letters, and they’re great letters…we fell in love…”.

Fun and joke, hyperbole and metaphor aside, I believe that statement is going to follow Trump to his grave.

Kim Jong-un is a dictator extraordinaire. He oversees a nation that carries out, “…extermination, murder, enslavement, torture, imprisonment, rape, forced abortions and other sexual violence, persecution on political, religious, racial and gender grounds, the forcible transfer of populations, the enforced disappearance of persons and the inhumane act of knowingly causing prolonged starvation,” – courtesy of a 2014 United Nations report that examined North Korea.

According to the Institute for National Security Strategy (a think tank arm of the National Intelligence Service), “In the first six years as leader, he has ordered the executions of at least 340 people. In 2016, Kim Yong-jin, the deputy premier for education, was killed in front of a firing squad after showing ‘disrespectful posture’ in a meeting. Hyon Yong-chol, a general over the armed forces, fell asleep in a meeting. He was executed with an antiaircraft gun.”

In other words, for nodding off during a meeting, the general was blown to smithereens!

One of Kim’s uncles, Jang Song-thaek, was convicted of treason. He too was blown to smithereens by antiaircraft weapons and his body incinerated with flamethrowers. Kim’s estranged half-brother was assassinated by poison at the check-in counter of the Kuala Lumpur International Airport in Malaysia.

And so, we come to 21-year-old American Otto Warmbier. He was vacationing in North Korea and allegedly attempted to steal a propaganda poster (as a memento) from his hotel. He was arrested and sentenced to 15 years’ imprisonment at hard labour. After 17 months, he was released with severe brain damage and died shortly after.

Trump defended dictator Kim when he denied any previous knowledge of Otto’s situation. Trump even relayed how Kim felt, “very badly about it”.

Trump appears to be drawn to power…any kind of power. Kim is the third dictator that he has defended.

Trump has a nasty habit of going from POTUS (President of the United States) to putus (Jamaican dialect for someone’s sweetheart).

I wonder how low he’ll go.