George Davis | If you borrow, you must repay 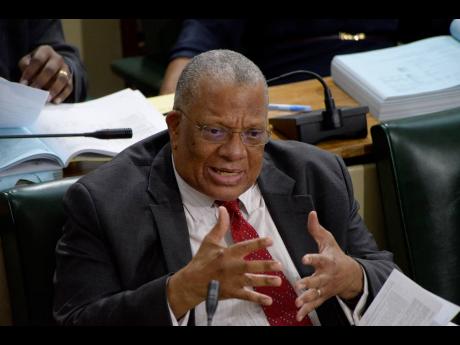 Political campaign season and the Budget speech cycle are times of great stress for politicians and their advisers. Brainstorming meetings are often emotionally charged and competitive as political leaders look to fire up their team to generate the ideas that can provide good copy for the media to run with and, more importantly, to create slogans or catchphrases that will resonate with the masses.

Demographics are carved up and persons assigned to look at what can be promised to each group, along with determining how the phrasing of that promise should be done when a stump speech or a presentation in Parliament is made by the political leader.

It doesn’t take a clever adviser to attend one of those meetings prepared to posit that, “Something must be said about the Students’ Loan Bureau (SLB). The SLB features in every Budget Debate by a minister and is also prominent in every rebuttal speech by both the opposition spokesman on finance and leader of opposition. A position on the SLB is a guaranteed newsmaker and is perhaps the one thing the majority of tertiary-level students, who appear deaf to anything having to do with governance or substantive politics, can recall from any Budget Debate process.”

With the SLB being of such importance to our political leaders, you can understand me being keen to hear from Opposition Leader Dr Peter Phillips, the alternative to the current guarantor requirement imposed on borrowers from the SLB. One of the main points of his Budget presentation was the abandonment of the requirement for a Students’ Loan guarantor.

I confess to having a difficulty seeing how this would work without the need for the Government, that is, the taxpayer, picking up the slack when some borrowers choose not to repay. But while I can make the case about this move being generally unworkable, I will wait for Dr Phillips to explain how this promise will be met under a government led by him.

To be fair, the opposition leader did voice disquiet about the guarantor requirement when he was finance minister. On March 19, 2013, Dr Phillips told the House of Representatives that the guarantor system at the SLB was deficient and therefore difficult to enforce. He said the requirement would be subject to revision, even as he noted that any alternative would have to be something “where there is a bankable obligation and guarantee given”.

WHAT IS THE ALTERNATIVE?

The question then is, what will be the bankable obligation that Dr Phillips will proffer as the alternative to the SLB’s guarantor requirement, and who or what will provide the guarantee for it?

The repayment of student loans has always been the number one problem facing the SLB, regardless of which political party is in office. So, a question for Dr Phillips: How does the abolition of the guarantor requirement affect loan repayment?

A report from the Auditor General’s Department shows that from April 2012 to February 2018, the SLB’s non-performing loan portfolio was $11.3 billion. The same report shows that another $2.5 billion worth of loans were written off by the SLB as bad debt.

Additionally, another $1.3 billion had to be taken from the SLB’s self-insurance fund and injected into the pool available to lend to borrowers. Alongside assisting with capitalising the SLB, should Government really turn around and guarantee these debts?

As things stand, there is a certain category of borrowers for whom the Government serves as guarantor for their SLB loans. In September 2017, Education Minister Ruel Reid told a gathering at the G.C. Foster College in St Catherine that the Government would stand as guarantors for those students enrolled at a teacher-training institution, provided they were willing to be bonded to the Government for five years. Fair enough. But there must be a reason that no government in Jamaica’s history has taken on the broad policy of guaranteeing student loans for borrowers.

Too many persons who benefited from the SLB believe they should not have to repay their debts upon graduation. This view is perhaps reinforced by some politicians, who embolden them to think and act in a manner which compels others to pay for their tertiary education.

There is still no cross-party consensus to drum home the message to student borrowers: you borrow, you repay.