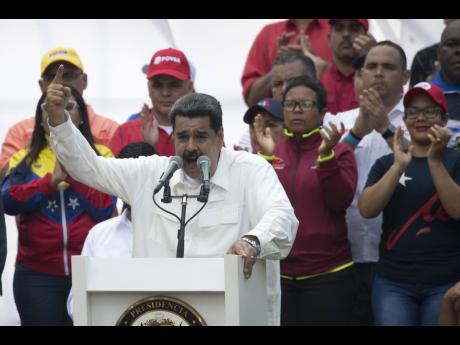 The Caribbean has had a firm tradition of supporting the sovereign rights of nations. For example, in 1972, the prime ministers of Barbados, Guyana, Trinidad and Tobago and Jamaica upheld the sovereign right of Caribbean states to establish and pursue economic and diplomatic relations with Cuba in the face of Organization of American States (OAS) pressure to blacklist the country.

Given the meaningful and significant role of PetroCaribe in Jamaica, it is disappointing that the Jamaican Government voted – along with the governments of Guyana, Jamaica, Haiti, The Bahamas and St Lucia – not to recognise the second five-year term of President Nicolás Maduro.

The recent scandals of corruption in Jamaica and Haiti reveal that political elites have been helping themselves to the feeding trough of Venezuelan oil provided under the PetroCaribe agreement – therefore what moral position do we have? The recent decision to temporarily close the Jamaican Embassy in Venezuela seems to be at odds with CARICOM’s insistence on non-interference by foreign governments.

The selective, opportunistic application of liberal principles has become part of the toolkit of powerful nations that have a vested interest in getting rid of governments and leaders that do not fit their agenda. For example, former President of Brazil Dilma Rousseff was impeached not for corruption, but for unauthorised movement of funds to cover holes in the budget.

The fact that previous administrations had done this without being punished was neither here nor there. Her impeachment was the result of a slow and deep process involving a sustained media campaign against her, months of political plotting, street protests and conspiracy theories.

Brazil is not Venezuela, but the similarities are striking. In all the smoke surrounding the Venezuelan crisis, the fact that an unelected leader, Juan Guaidó, has declared himself president and has gained international support for doing so is bizarre.

While it is true that President Maduro is not as popular as former President Hugo Chávez, he did secure 68 per cent of the votes cast in the recent elections, which the opposition coalition boycotted.

Maduro is currently ruling Venezuela under extreme circumstances. In addition, a new wave of right-wing governments in Latin America have quickly embraced Guaidó – not necessarily because they support democratic principles, but because defeating Chavismo (the ideas, policies and social programmes of former President Hugo Chávez) would further extend their power in the region.

It is irresponsible of some world leaders to encourage a situation of armed conflict in Venezuela. Attempts by powerful leaders in the international community to influence the affairs of a sovereign nation should be rejected, as well as the use of sanctions that only serve to heighten the suffering of Venezuelans, particularly women and children.

Meanwhile, the governments of the region need to continue to lobby for a way out of the conflict that avoids as much bloodshed as possible.

The tragic drama unfolding in Venezuela goes far beyond the country’s borders and the issues of the legitimacy of the Maduro government or of the democratic process. It does not take much imagination to realise that foreign intervention in Venezuela is likely about control over one of the world’s largest reserves of oil – not only of the Chávez Basin in Venezuela (formerly the Orinoco Basin) but beyond, to the real prize – the huge untapped potential reserves of the Guayana Esequiba region (El Esequibo in Spanish). Venezuela’s crisis clearly has geopolitical dimensions, as is the case with other resource-rich developing countries.

Chinese oil companies, the Chinese government and Russian-backed companies have played an increasingly important role in the Venezuelan economy since at least Chávez’s administration.

The Russian-backed oil company Rosneft has been involved in joint projects with the Venezuelan state-owned PDVSA (Petróleos de Venezuela, SA), mainly in the Orinoco belt. In addition, France’s Total SA, Norway’s Equinor and US Chevron all hold minority stakes in Venezuelan projects, with most vowing to stay despite the political crisis.

The powerful oil giants, however, are probably eyeing the area east of the Orinoco region, known as the Guayana Esequiba region – an area of dispute for years between the governments of Venezuela and Guyana. One can imagine a scenario where Venezuela, with Guaidó and his foreign supporters in control, would open the economy to foreign interests and re-privatise the state oil company. Then Guaidó could aggressively assert Venezuela’s claims to El Esequibo.

HOW SHOULD WE RESPOND?

Maduro’s administration has been accused of economic mismanagement and neglect of food security, harassment and intimidation of opposition leaders and protesters, and of downplaying an unfolding humanitarian crisis. Some of the economic problems of the country, however, are long-standing issues which will remain a challenge for some time.

As Caribbean citizens, we need to read the news on Venezuela with a critical eye. For example, powerful media outlets have increasingly characterised the situation in Venezuela as a fierce struggle between an authoritarian state and oppressed Venezuelan people. Clearly, the situation is more complex, involving both internal factions in the society and external geopolitics.

According to a new United Nations estimate, at least three million Venezuelans have fled the country since 2015, many of them seeking asylum in neighbouring countries as well as the United States. The response to the influx of migrants in the region has been varied.

The United States initially withdrew the visas of some Venezuelans. However, bipartisan bills to legislate “temporary migration protection” for Venezuelans, that would be effective for at least 18 months, are now in the hands of US lawmakers.

In several Caribbean countries, undocumented migrants live under the threat of deportation. Meanwhile, 11 Latin American countries recently agreed to accept migrants, even if their travel documents have expired.

Caribbean people should continue to watch the situation very closely in Venezuela, in particular, the threat of force, especially if such action is launched from military bases in the Caribbean Sea.

David Commissiong, writing in The Gleaner on Sunday, March 17, drew our attention to the extraordinary peacekeeping efforts of CARICOM within a contemporary era of conflict, tension, flagrant breaches of international law and order, and easy recourse to military aggression. Let us continue to lay claim to this philosophy and develop our own critical perspectives on Venezuela.

Dr Doreen Gordon works in the Department of Sociology, Psychology and Social Work at The University of the West Indies. Email feedback to columns@gleanerjm.com.