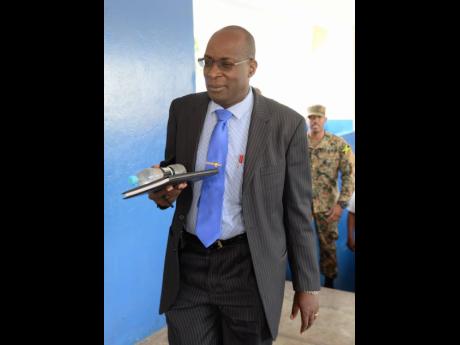 Today’s Scripture Reiding will be drawn from Isaiah, v. 42:

“Here is my servant, whom I uphold…

A bruised Reid he will NOT break, and a smoldering wick he will not snuff out.”

We are told how to recognise the true servant, and you heard the man: “a bruised Reid he will not break!”

Alas we speak, of course, about the firing/resignation of the Reid. I don’t think anyone is dwelling on any other topic across the length and breadth of the 13 parishes. So sudden! So spectacular! Sooo… pedestrian.

Anyway, ah nuh mi kill him! And it wasn’t The Gleaner either, despite the most recent editorial (‘Give Reid’s Code The Short Shrift’ 2/28/2019) launching itself with this gunshot:

“Ruel Reid has a problem of judgement. His is poor.”

The Reid was definitely bruised, and as reactions to his ridiculous “code” for teachers and school boards amply demonstrated, a smoldering wick. But no one would have said that he was “broken” or “snuffed out”. Not at that point.

The details are murky, down to whether it was a “firing” or a “resignation”, which itself is a matter of some moment. In other words, was it assisted suicide or execution?

Let’s be clear, either way, it’s no bueno.

Execution, being a drastic punishment, requires unimpeachable evidence of serious wrongdoing. If the PM has that, he has not bothered to tell us.

Meanwhile, “assisted suicide” is in contravention of Church teaching: Life is a holy gift, so we belong to the Father and not to ourselves to dispose of as we please. Hence, assisting another to commit self-murder is prohibited.

But it would appear that this is what Mr Holness did by appointing the Reid as education minister. Remember, his determination to get this accomplished spanned decades.

Reid was his adviser when he was minister; was appointed by him to the Senate after he chased out Tufton and Williams; and was reappointed after victory in 2016.

By “quote di Scripture”, I mean that the public really would like to know chapter and verse of what is happening.

Indeed, a legitimate avenue of inquiry is what Andrew the Executioner now knows that he didn’t know three or six months ago? If there is some such, exactly when did he come to this new knowledge? And what did he do about it at the time it came to his attention?

This is, of course, in the context of Reid’s beheading taking place immediately after an Opposition press conference while a by-election is hotly being contested in Portland Eastern.

Here’s a thought: Andrew was dithering until he had no choice but to act. For he couldn’t possibly have been unaware of the problems in every corner of the education ministry. Nor could he have been ignorant of how the Reid was flouting convention and perhaps law.

Did Mr Holness, for instance, not know that the Reid had extended his stay as principal of Jamaica College while collecting for full-time work as minister? How about signing off on his own extension? Or was it someone else who did that?

Could Mr Holness have been unaware that the Reid was still living in the house provided for JC’s headmaster? Was the Reid getting a housing allowance as minister?

Consultancies have been hot-button, controversial items over many administrations. They are generally approved by Cabinet. Is it possible that Mr Holness was unaware of his former colleague, Othniel Lawrence’s consultancy at Caribbean Maritime University? That name must have jumped out.

Though I suspect it would be very productive, I don’t want to go down that rabbit-hole too far. Because I want to come back to the execution (or assisted-suicide).

Here’s how I see it. The PM knows the public loves to perceive decisiveness, and even more, the public loves blood. And since Damion dung ah Portie ah shell dung de place ah talk bout goat, Andrew just shub out a goat and kill it. Si goat deh!

Can you hear the Roman roar at the spectacle? The spin doctors were immediately out and about talking about “decisive action” even as the Reid’s arteries were still gushing.

Note: we would have to know WHEN the PM knew of these things to determine if the action was decisive or merely the result of extensive dithering, plus opportunity or necessity.

But it cannot be denied that once it became PUBLIC, the Reid was swiftly turned into curried goat. And here, there’s an instructive comparison to be made between ramgoat-Reid’s swift post-publication “choat-bussing” against the tender petting accorded to billygoat-Wheatley.

The difference, methinks, is that only one of the PM’s pals had (and has) troops. You can guess which. For in matters of cold calculation, we must consult with, perhaps, the coldest calculator of them all: Comrade Stalin. It was he who asked: “The Pope? How many divisions has he got?”

I say that to also point out why it is completely inaccurate to say, as some of the media cheerleaders have been trying to, that the supposedly swift slaughter of the Reid bespeaks leadership setting its face against corruption. Not so fast!

Mr Holness could very well be turning over a new zero-tolerance leaf. We don’t know. All I’m saying is that this isn’t evidence of it. Breaking the Reid was an easy, painless sacrifice.

Holness remembers well his first major “error” on this score, which was to sideline a general with divisions. That was Mike Henry in the JDIP scandal back in 2010.

He learned then that such a move, after delay, just procured him an enemy and demoralised his base without even giving him the limited kudos of “decisive action”.

Anyway, as an opinion columnist, I am entitled to have my favourites, and it’s fair to say that the Reid wasn’t among them. In fact, I admit to having subjected him to a heavy tonnage of criticism, mainly due to an incoherent school fee policy coupled with a predilection to attack and disparage his subordinates.

Thus, the Reid had conspired to publish “Clueless and careless: Ronnie and Daniel Thwaites just don’t get it!”, signed by the ‘Friends of Senator Ruel Reid’.

It was published right here, can you believe it? Up inna fi mi garrison – The Gleaner’s editorial page. Ah mi fi tell yuh!

So perhaps it would surprise you to learn that I take absolutely no pleasure in the Reid’s spectacular fall. I had thought it sufficient for the PM to demote him to junior education minister, move him horizontally into OPM to doze with the rest of the second team, or perhaps best, narrow his focus to the Information portfolio, where he was best suited to do the most damage to the Government and the least damage to the country.

But this fall has been dramatic. With one swing of the axe: three ministerial portfolios, the Senate seat, the candidacy in NW St Ann, the principalship of Jamaica College, and friendship, all went bust. Now here comes the PNPYO advocating that Reid lose justice of the peace status. Lawwwwd, unnuh ruff! Speaking of which, The Gleaner reports that the Reid called up his old haunt looking to get back di werk at JC.

Wow! Let’s face it: those aren’t just your everyday meatballs on the man; those are goddamn coconuts! Coconuts, I tell you!

Anyway, in the unlikely event that the PM doesn’t know where to look, and doesn’t have all of this information already, let’s help by adding to the extensive list of investigatable subjects already mentioned.

Start with an audit of the National Education Trust. Then check if the Reid had personnel and property in use being paid for by CMU and the H eart Trust/NTA.

See if there was a credit card that the Government was paying and for what purposes. And then check if there’s so much prosperity that the domestic helper (excuse me, the ‘homecare consultant’) is ‘moonlighting’ as a consultant elsewhere.

Have a look at the construction contracts for school infrastructure. Were they tendered? Look at which agencies have received money for the Career Advancement Programme and/or the Tech/ Vocational Advancement. How much has been spent on training?

Sadly, it’s unlikely that the Reid will be the lone tree falling in the forest. He’s more like one of those ash trees that fly up really high but have surprisingly shallow roots, so they bring down other trees as they topple. Look out for them.