Orville Taylor | Dorrained on my parade 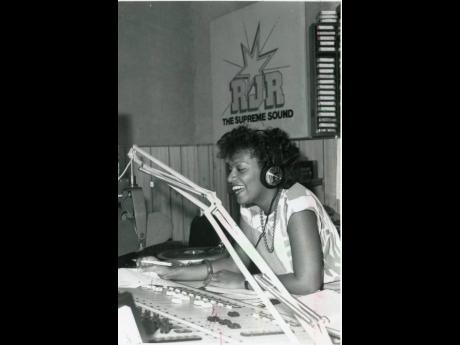 Gleaner Photo
Dorraine Samuels filling the airwaves with her laughter in 1987.

More than half the present population of Jamaica were not alive in August 1980 when she walked on to the stage.

Neville Willoughby asked her something. Funny, I do not remember the question but the answer resonated in my mind, “That is correct!”

There she was, the shapely 20-year-old, with a slight overbite and cute buck teeth, but her voice was captivating.

Instantaneously I looked over at my ‘twin’ sister and she said something in French. She was amazing, she belonged on radio.

The rest of it is … sociology. History is another discipline.

Perhaps the average reader will not understand the significance of Dorraine Samuels’ victory. This St Hugh’s High School graduate was a year ahead of me. My friend and colleague, Sharon, remembers her being in the same class. But I used to hang out with the Alpharians and did not particularly like the shade of green in the uniform of the fidelitas clan. Worse, the girls from Leinster Road were clan with the boys from Kingston College (KC), our friendly cousin rivals.

Dorraine was my favourite. Coming from the victory of Debbie Campbell in 1979, I wanted a ‘bronze queen’. Campbell, a stunner in her own right and not overly de-pigmented, had been a return to the status quo of women who did not look like Kunta Kinte’s sister being selected. Moreover, although I was one of those Africentric youth who was thrilled that Joan McDonald had won in 1978, there was a deep disquiet that she might have been given the nod as a political ploy, as the Manley administration sought to consolidate the melanin vote.

Thirty-nine years later, looking back at the pictures of McDonald, she actually looks more queenly than she did to a pair of adolescent eyes, still clouded by the colonial legacy.

Campbell was fine, but most of us testosterone-laden teenagers had preferred the petite, proportional and pretty Audie Culliton-Moore, whose Highgate Chocolate complexion and other rare assets gave as much pleasure as she approached as when she walked away. Alas, Audie was the runner-up and we were left wanting.

In the finals in 1980, Michelle Harris, the tennis star, beat Dorraine in the tiebreaker. Although I attended St George’s College, the leading tennis school in the country in the ’70s, I never liked sports with small balls. Therefore, her beating my pick was salt in the wound.

Yet, Samuels had the last laughs. Harris was a small trickle in our history, but Dorraine reigned and rained on their parade for four decades, as she filled the airwaves on the most iconic broadcasting entity, RJR.

She was the shower of rain and ‘Rainebow’ we needed in 1980.

For me, the beauty contest was as the end of my first week working at the Stamp Office, and I hated it like a dose of poison. Opening receipt books and stamping documents, it was a warning to continue my education and never get stuck in some obscure quarter of the civil service.

Earlier in the month, we got our first but misnomered Bronze Queen, Merlene Ottey, who, at the same age as Dorraine, won our first individual Olympic medal as runner-up to two Soviet bloc athletes, whose marginal femininity gave a different meaning to the ‘iron curtain’ their countries were behind.

Believe it or not, 1980 has a lot in common with now, although there were dark days. We had an awful homicide rate and an undeclared civil war between political factions. The People’s National Party (PNP) was behind in the Carl Stone opinion polls, and election was in the air and the party was in denial.

Externally, the USA led a large group of countries in a 66-nation boycott over the Soviet Union’s invasion of Afghanistan. Despite China, a long-time ally of Russia also not attending, Jamaica did not bow. We turned up in Moscow, and the only DQ was not our disqualification, but Donald Quarrie’s last Olympic medal, a bronze like Dorraine’s skin.

Anyway, in 1980 Radio Jamaica (RJR) was trying to recruit trainee announcers and I went for an interview. It was just before the election and Ralston McKenzie facilitated my forgettable audition. His polite “you will hear from us” was almost a platitude. Well, to be fair to him, he called to me on Monday as we reminisced about her.

However, the bronze beauty had her feet wet by then and any sensible wannabe broadcaster knew that this new voice was the golden standard and my immature stuttering vocalisation would not cut it, although my diction was strong, it was stiff and halting.

Time longer than rope, we say, and in 2005 Henry Stennett and Tanya Powell-Edwards came for me to join another legend, Barbara Gloudon.

Doubtless, being in the presence of the icon of talk radio was another moment when my battle with incontinence began. But it got worse, as I looked up and across the glass partition.

There she was. My bronze Miss Jamaica of all time.

My bowels were in a struggle with me but I fought right through.

It had been 14 years, at least 65 days out of the year, I walk into studio 94, and I had the best job in the world. Greeted by my perpetual eye and ear candy, with a punishing glare, when I occasionally arrived while she is reading the obits. Somehow, she put up with my silly attempts at humour. Her only reproach was that my jokes were so corny that I needed to buy a round at the bar.

Well, that is a bill that I will never get to pay and she is gone.

Wednesday last was my hardest day on radio ever. No more jokes about the Donut and/or Dorraine in Spain who mainly stays in the plain.

Even now as I struggle to complete this commentary, my consolation is that God gave me the opportunity to share space with history, a legend, but most of all, a great human being.

Sleep well, Rainebow, you are our pot of gold at the end.