Maziki Thame | Crawford vs Vaz and brown power in Jamaica 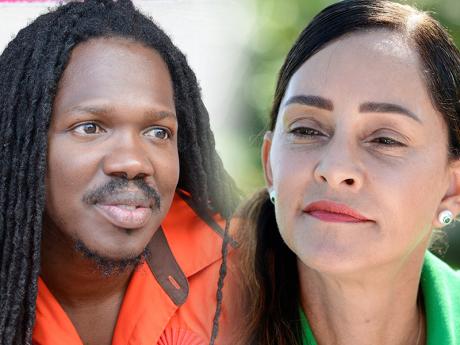 'Michael Abraham’s article on 'Damion Crawford’s Hypocrisy tells only part of the story.

The real question is what accounts for Ann-Marie Vaz’s rise to status? What gives her access to money to start a foundation and the confidence of the business class to support her campaign? Could a black girl from the country, carrying load on her head and back, sleeping in a callaloo bed to stop praedial larceny see the same rise in status and power?

This has everything to do with Ann-Marie as a ‘brown girl in the ring’. She can get a pass uptown and downtown, where Portia did not. And she can even tell us that if we follow her example, we too can be “the star of [our] own show”, “attain more”, no matter how much (or little) we have.

Our understanding of who should lead us, shifts the definition of competence to lead where brownness is concerned.

When we are presented with the brown candidate, we abandon our attachment to those things we claim to value, such as the command of English as a marker of intelligence.

We can forget in this moment that we were just recently embarrassed by the speech of Portia Simpson-Miller. Given the value of brownness, Ann-Marie Vaz can have the space to thank “social media land” for giving her an opportunity to “stumble” and not judge her too harshly.

As much as we like to deny that race is active in everyday living in Jamaica, this country continues to be anti-black and pro-brown.

When Crawford says the East Portland by-election is a fight against the system and history, we are made to be uncomfortable with the memory that history, the slave plantation, colonialism, independence, the flow of money, control of resources, access to ‘good’ schooling, the beach, the beauty title, wifehood, power et cetera, has favoured brown people in Jamaica. And many of us rush to the defence of browns because we favour brown leadership. We trust brown people over blacks.

We desire to be brown.

Brown people have had legitimacy to rule over Jamaicans since the aftermath of the 1930s labour rebellions. In the midst of the 1938 labour riots, Norman Manley and Alexander Bustamante inserted themselves into the colonial power structure to bring ‘peace’ to the situation.

At that time, Bustamante curiously claimed he could defend the interest of both worker and capitalist. It is curious and relevant because the place of the black worker was and continues to be a critical indicator of the gap between those who are able to enjoy the spoils of blacks’ labour through profits and the grave conditions that led to the riots in the
first place.

This type of discrepancy would remain a factor in the divide between the aspirations of black Jamaicans and the brown politicians who have led them since.

The success of brown leadership is rooted in the fact that ‘the people’ agreed that browns could best negotiate on their behalf, as in-betweens, able to bridge the gap between black and white, as ‘betters’ on
the path to ‘civilisation’, seen especially in the command of English and given their proximity to whiteness.

A significant dimension of the colonial thinking of black Jamaicans was that blackness meant one did not have the capacity for self-rule.

This was shown for instance in the decision then, to discontinue the celebration of Emancipation Day.

Bustamante for his part, saw no connection between the emancipation of enslaved Africans and the independence of their descendants, declaring in 1962 that, “Queen Victoria of blessed memory abolished slavery in Jamaica on the 1st of August, 124 years ago,” and asking “what significance has that with our independence now?”

The rise of black nationalism after independence was therefore out of sync with the aspirations of brown leadership. The 60s was marked by the bulldozing of the homes of the black poor, leaving them to sleep in the street and cemetery, the banning of black literature, the revoking of passports of black nationalists and banning of Walter Rodney, the voting down of anti-discrimination legislation, and the hunting down of Rastafarians after the Coral
Gardens incident. Norman Manley felt that Jamaicans were wasting “good emotions that cling to the idea of Black Power for purposes that mean nothing to us.”

Brown rule was challenged by the long stay of PJ Patterson in power and more so by the rise of Portia Simpson-Miller. Patterson could be presented to us and the world as the respectable black, who had risen from the peasantry to the ‘auspicious’ discipline of the law and was therefore seen as an appropriate representative, though black. Simpson-Miller however, was always seen as far too close to the black (female) underclass, having not risen
through the professions and suspiciously seeming to be more comfortable with Jamaican over English.

Her rise therefore represented the real possibility that ordinary, black Jamaicans had found the confidence to choose one of their own, one that looked and sounded like them and was unapologetically identifying with them. This battle around the assertion of blackness as against brown power is ongoing in Jamaica. Our political choices are telling indicators of where we stand as a nation on the vexed issue of race and more specifically, the status of
blackness.

Dr Maziki Thame teaches in Political Science at Clark Atlanta University. She can be reached at mthame@cau.edu.