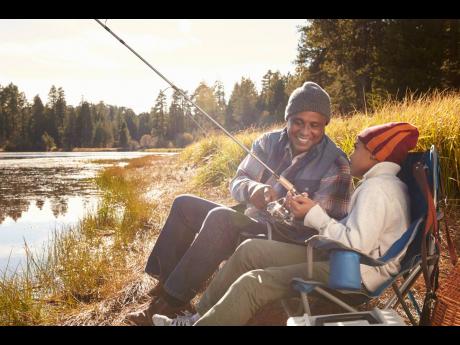 The first time I heard it I was overwhelmed by the sheer simplicity of the aphorism. Then I heard the twist by comedian George Carlin: “Give a man a fish and he will eat for a day. Teach him how to fish and he will sit in a boat and drink beer all day.”

There are other modern variations of the quip: “Teach a man to fish and he will be surrounded by people telling him how they can do it better.”

My wife also knows that when a man is taught to fish you can get rid of him for the entire weekend.

But my mother found that out many years before when she allowed me to spend a weekend by my school friend, Trevor. Up to that point in my life, she gave a boy a fish and he would ask for more, especially something which we called ‘fry-me-dry’. It was essentially a sardine or small herring which she bought by the bowlful. She took out the scales with a knife, slit the stomachs, washed the fish in some lime and then marinated them in onion, garlic, salt and pepper. She later dipped each little fish in flour, threw it in very hot oil and fried it to a crisp.

Recently, when my daughter Jasmine asked me what fish dish I liked best, I went through a long list in my mind, everything from grouper to pompano, tuna to salmon, and came up with the humble ‘fry-me-dry’.

I would stand by the stove, crowding my mother, hearing the oil bubbling in an old, bent and blackened frying pan, sometimes getting hit by the splattering oil because I had crept up too close to the one-burner stove, then after grabbing one of the cooked fish in my hands, juggling it to keep from getting my palms burnt and stuffing it in my mouth, I crunched it and crunched it again – a mouthful of heaven.

Trevor’s father taught me how to fish. But first we had to dig for worms. I came up with a multicoloured and many-legged creature and Trevor jumped back in alarm.

“Dat is not ah earthworm,” he shouted!

Eventually, we got a milk tin full of wriggling worms and headed for a pond at the back of Trevor’s house. There was a bamboo clump at the side of the pond and Mr Roop, Trevor’s father, cut two thin and supple rods for us.

Trevor knew what to do but I had to learn how to take a piece of string, put a cork from a bottle on the string and then tie the end to a small safety pin, break off a piece from one of the worms but leaving enough wriggle room, thread it on to the sharp end of the pin and then immerse the pin and worm in the water and watch the cork bob until it got pulled down. When that happened, I had to whip the bamboo rod upwards to ‘hook’ the fish and then take it off the hook. Simple? Basically, a jerk at one end of the line waiting for a jerk at the other end.

The first bite I got, I pulled so hard that the fish, a small coscarob, or what we called a ‘coskie’ of the Cichlidae family, flew off the hook and ended up so high in the bamboo patch that we could not reach it, especially since the hook, freed of the fish, had continued its journey and ended up stuck in my back. Despite this initial setback, I was hooked for life.

The next day, by then as boastful as all the other fishermen, I headed out on my first-ever camping trip with Trevor, his father and two other friends. We went to camp at a dam in the forest and having caught a few fish, left one of the men, ‘Ginger’, to cook while we went hunting.

We returned empty-handed and hungry.

TEACH HIM TO COOK

On the little fire we had set up, our chef had boiled rice and curried the fish. I put some of the rice in my ‘enamel’ plate and poured the fish and curry-sauce over it. I bit into my fish first and it skidded right out of my mouth.

The others gagged almost simultaneously.

It turned out that Ginger had not taken off the scales or gutted and washed the fish. All he did was put some oil in the pot, pour in curry powder and ‘cooked’ the fish. Perhaps the Chinese should have known that teaching a man how to fish was not enough. You also have to teach him how to cook.

Paras and Sam, two of my fishermen friends, did not need the Chinese. During a fishing trip, they introduced me to a delicacy which, 30 years later, I still remember.

We left Carli Bay, a fishing village in Central Trinidad, and headed up the Gulf of Paria towards a group of islands off the North-West Peninsula, fishing all the way. We were well armed – beer for me, two bottles of overproof ‘Puncheon’ rum for the others, and seasoned catfish for all.

We landed on one of the islands, Chacachacare, in the late evening and Sam quickly gathered some sticks and started a fire, currying the catfish. I made sure, this time, that the only scales involved were the ones that the fish was weighed on. Later, on the island, in the moonlight, bewitched by the sounds of the night and the rumble of the occasional smuggler heading to or from Venezuela, I had the second-best fish dish of my life.

The experience led me to once more question the Chinese wisdom. I learnt to my joy and later sorrow that if you teach a man to fish he has to buy a boat and trailer, rods, reels, gas, a GPS and beer.

Tony Deyal was last seen trying to communicate with the fishes. He dropped them a line but they refused to respond. Email feedback to columns@gleanerjm.com.