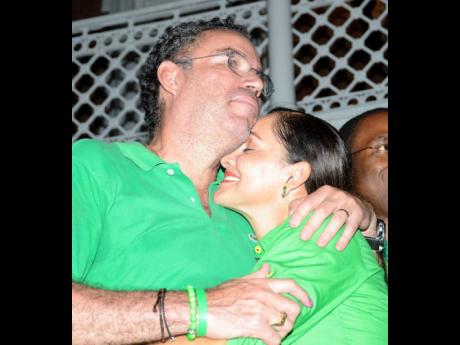 Ian Allen/Photographer Ann-Marie Vaz being congratulated by her husband, Daryl, after winning the East Portland by-election on Thursday.

I don’t want to get in trouble for saying that Daryl is now the MP for all of Portland. But who cares? Congratulations to Daryl for becoming the MP for Portland, a truly historic feat. And congratulations also to his lovely wife, Ann-Marie, who played her part superbly.

As The Gleaner, generally the non-contentious non-partisan wordsmiths, put it:

“With Daryl Vaz, her husband, being MP for neighbouring West Portland, the two-seat parish will now be represented by one household.”

OK, that’s probably a better way to say it: “one household”. So this is the Kingdom of the House of Vaz, otherwise known as Vazland. Will they be requiring visas for entry?

It’s not quite the Jamaican version of the fictional ambitious Rep Frank Underwood and his equally ambitious wife Clarie in ‘House of Cards’, but maybe it’s not completely unrelated, either. The House of Vaz is a locus of political power on the island rivalled only by the House of Holness. Maybe it’s ‘Game of Thrones’, actually.

Anyway, the Vazes ran a splendid campaign. They had the distinct advantage, also, that Ann-Marie had been in the constituency working, cleaning beaches, announcing government projects, and generally being a good citizen, for years ahead of the poll. I believe the jump in the vote numbers is attributable to this work and visibility, coupled with the vast expenditure of resources.

In other words, in many respects, Mrs Vaz had the advantages of incumbency even though she was ‘new’.

Crawford, for all his popularity, face, and Rasta-recognition, was parachuted in with short notice. That, itself, says something about the state of the PNP’s organisation in the constituency, as there was nobody that the party wanted to be the standard-bearer already in poll position when the MP tragically died.

In Jamaica’s political culture, that is actually the norm. The parties do not tend to accommodate apprentices at the constituency level very well, and generally it’s one big bull in the pen until such time as when that bull leaves.

This was a big win for the Labour Party, and also a big lick-dung for the PNP. Analysts have been pointing to the swing in the number of votes that brought Ann-Marie to victory. That’s a fair point.

But it’s also true that Crawford pulled out lots and lots of votes. Both parties pulled out their bases, but the Labour Party pulled out lots more besides and clearly won the contest of convincing ‘new’ voters to go with them.

The most startling number I’ve heard throughout this whole process is from Bill Johnson, who said that millennial support for the JLP was two to one against that for the PNP. That hardly needs to be spelled out more clearly, but for the deaf ones at the back of the room, it means that riding the coat-tails of the 1970s finished off sometime around 2007.

Anyway, with all the hoopla and the tremendous head start that I’ve mentioned, the difference was a mere 1.57 per cent. Despite the aforementioned ‘swing’, that should give those either too jubilant or too depressed some pause.

In 2007, Donald Rhodd won with 52.5 per cent of the vote. In 2011, Lynvale Bloomfield won with 53 per cent of the ballots cast. In 2016, Bloomfield again took the trophy, this time with 57 per cent. That, it has to be said, was an unusually spacious victory, probably reflecting the weakness of the candidate he was up against. In this election, things have returned to their normal, with a close race.

It cannot be ignored, though, that the majority of the electorate in Portland Eastern chose to elect neither. With 36,315 eligible voters, 46.5 per cent opted for neither ‘the bell’ nor ‘the head’, which is a tremendous commentary on the state of the island’s politics.

This, in spite of the flood of resources, public and private, that had been directed towards the constituency in the last few months. It truly was like when the Rio Grande is in full swell. The Gleaner actually reported on voters coming out of the booths and requesting that the party representative “do de maths”.

Now it has to be accounted in the reckoning that some of the resources were also expended to pay people to NOT vote. So the numbers are more complex than they may first appear. But even with that caveat, it is truly remarkable that so many of the electorate couldn’t bother to go put down an ‘X’ somewhere.

In some ways, the political parties were returning to their origins. Back in the day, the PNP had that reputation as a home for intellectuals, and that can, without temperance, shade off into intellectual snobbery. Conversely, the Labour Party had the reputation for being about the delivery of immediate benefits, like Busta’s famous ‘BRED’.

And when the mud-slinging of this unfortunate campaign was all said and done, and the raw cussing about ‘who is who’ came to the fore, isn’t that what it came down to? A sad competition between an insurgent young man from the educational elite, against a lovely lady from the social elite. Roughly one quarter of the electorate chose one, another quarter chose the other, while a whole half of the electorate sent the message that they want something else.