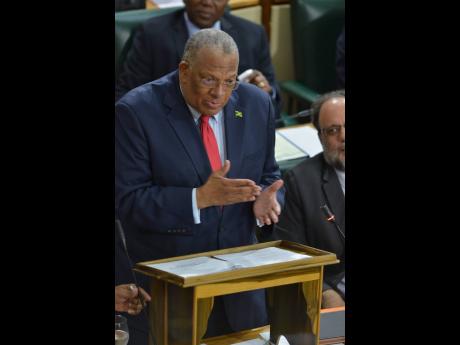 On March 14, as I watched Peter Phillips’ Budget presentation, my mind drifted back four short years.

“Let me be clear and fair. This build-up of debt didn’t happen overnight … . It was successive Jamaican governments that borrowed and spent the loans equally which created the debt. We must acknowledge as a country that we failed over the past four decades to sustain economic growth.”

Four years later, his narrative changed. It was JLP’s fault.

“I still recall the situation that existed before we embarked upon the Economic Reform Programme.

- They missed the majority of deadlines and structural benchmarks thereafter;

Rows and floes of angel hair,

and ice cream castles in the air.

I’ve looked at clouds that way.

But now they only block the sun.

They rain and snow on everyone.

So many things I would’ve done,

but clouds got in my way

The statesman that analysed the states of public emergency (SOEs) so clinically bereft of populist politics was missing in action, presumed dead. Obviously, Peter and Jacqueline Susan are fundamentally at odds.

- The 2014 Forbes Best Countries for Business Report ranked Jamaica 64…. making it the best country in the Caribbean ... These are achievements for which all Jamaicans should be proud.”

2019 Peter noted Jamaica’s ratings decline (to 75 on WBDB; 79 on GCI, actually an improvement on 2015; and 80 on Forbes) but complains the Budget is aimed at stimulating business. He obviously so enjoys cake he must eat his and have it too.

2015 Peter trumpeted Customs Act reform: “effectively reducing duties on commodities and eliminating duties on all productive inputs”; boasted of a new Fiscal Incentives Act which relieved “the investor of the potential cost of statutory deductions and provided for more generous capital depreciation allowances”; and proudly proclaimed “The net effect of these changes has been to substantially incentivise productive sectors and improve rate of return on investment.”

In 2019, Populist Peter sheds crocodile tears because “nothing” is done for the poor, ignoring the obvious (but unpopular) truth that the best any government can do for the poor is to increase productivity.

I’ve looked at clouds from both sides now.

from up and down, and, still somehow,

I really don’t know clouds at all.

“There’s no doubt fiscal reforms undertaken have carried us into a new ball game in which there are new and existing economic possibilities and opportunities for investors … .

This new environment is defined by the implementation of new fiscal rules and associated legislation regarding debt management, insolvency rules, secured interest in personal property, etc.

These changes will be protected forever ... .

We have to protect and build on these gains which have resulted in macroeconomic stability, predictability and growth in critical sectors. Understandably, many want to see more expenditure in every area of the budget, and without doubt there are needs…. However, the fact is when we decide to spend less we also borrow less; and the benefit to investors is the continued scope for the reduction of interest rates and more productive investments and job creation.”

I kid you not!

In launching a sustained attack on PNP’s latest straw man, “trickle down” 2019 Peter called for:

1. “ n ational mobilisation of resources to provide for quality education and training in order to create the kind of labour force that can modernize agricultural production;….. expand economic opportunities with agro-processing, community tourism, music, sports and other creative industries; provide jobs through Climate Change Adaptation and Mitigation: add jobs in the knowledge and innovation industry of the new economy.”

I agree. But he wants more expenditure without acknowledging the need for a revolution in education and presenting a “how to” primer. If we doubled expenditure on today’s education system, outcomes wouldn’t change.

2. “A massive land-titling programme to allow for easier, speedier and more affordable ownership.”

3. “…. priority should be to reduce tax on consumption if the objective is to stimulate real growth. By reducing GCT, we’d also reward ordinary consumers who shouldered the major part of sacrifice … Remove the gas tax that was imposed in 2016!”

In 2012, Finance Minister Peter generously reduced GCT from 17.5 per cent to 16.5 per cent, but simultaneously added many formerly exempted goods to GCT payable list, thus increasing GCT on those items from 0 per cent to 16.5 per cent. The additions included “raw foods” such as all fresh fruits and vegetables; all ground provisions (for example, Usain’s yam, dasheen, potatoes); all legumes; onions; garlic; all meats (except chicken); and all fish.

2019 Peter wants GCT reduced. Gee, thanks, Peter, but we know that isn’t possible. You should know it too. Just populist so-so chat!

2019 Peter also expressed deep concern that “…..of those employed, over 700,000 are near or at the minimum wage, and quickly losing hope…. These persons have families that depend on them.”

Aw, shucks. How sweet. Was this a dig at the low-paying BPO sector? Nah, couldn’t be! 2015 Peter hailed BPO as a key facet of his growth strategy:

“I now turn to an exciting and vibrant area of economic activity, the business process outsourcing (BPO) sub-industry….presently making a major contribution to employment generation and augmenting economic growth. A 5-Year Strategy for the expansion of the sector which…..should increase employment……will be submitted to Cabinet shortly.”

Moons and Junes and Ferris wheels

The dizzy dancing way you feel as

I’ve looked at love that way.

But now it’s just another show.

You leave ‘em laughing when you go.

And if you care, don’t let them know.

Don’t give yourself away.

In highlighting several areas of mismanagement and corruption, Peter Phillips hit the nail squarely on the head. But, even there, he appeared a putative leader following his de facto boss Mark Golding by repeating much of Mark’s speech. He would’ve appeared more leadership inclined had he proposed innovative governance systems to address these issues frontally and correct them. But he preferred activism to leadership and settled for populist finger-pointing. And a lame system of advertising for statutory board positions. It’s not the application process that needs reform. It’s the lack of transparency in appointments!

PM’s idea of “accountability” is for more due diligence by Cabinet. That’s as transparent as the Carbarita swamp and offers Peter Phillips a golden opportunity to don the leadership mantle. But Peter didn’t seem to want it. His Budget presentation was a grim reminder that our politics is a circus and governance, a bad joke. Neither party wants transparency. Both just want their turn at the trough.

I’ve looked at life from both sides now.

From win and lose and still somehow.

I really don’t know life at all.

Joni Mitchell was a young artiste on the cusp of stardom when she wrote Both Sides, Now. It was a rare show of introspection and self-awareness for one in the hype industry, never better exemplified than when covered by a dying legend, Johnny Cash, in 2002.

Mitchell recorded it herself in 1969 and again for a 2000 album. By 2000, Mitchell, her voice notched down to alto, had evolved into an interpreter rather than a confider speaking to her confidante.

“….is, at first, a meditation on clouds, the whimsical way a child sees them, as ‘ice-cream castles in the air,’ but there are two sides to everything, and as we mature, we stop seeing clouds for their simple beauty, but as a sign of rain or bad weather. It’s like that with all things that seem at first so simple and beautiful, such as love and life. We start out with such natural optimism as children, and then as adults we tend to learn a bitter pessimism or brutal honesty, seeing clouds/life/love for what they are.”