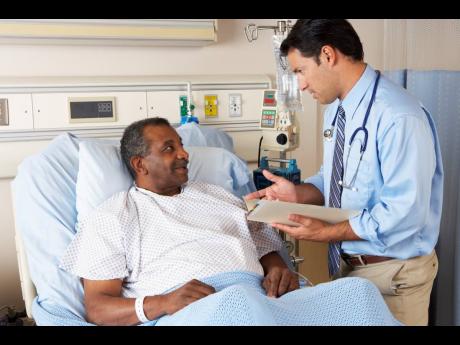 According to the ‘Mammoth Book of Oddities’, Dr. Hector Vasconcelos from Trinidad left surgical gloves, a surgeon’s mask and two surgical instruments inside his patient’s stomach. In fact, between 1962 and 1979, a legal insurance society in Britain reported 946 cases involving leaving swabs, instruments, needles and other paraphernalia inside patients after their operations. The leftovers have now reached about 4,000 a year.

In 1998, I left the Pan American Health Organization (PAHO) and took up a job with Petrotin, the national oil company of Trinidad and Tobago. Petrotrin was recently shut down by the Government, and with it the hospital. This is a recollection of one of my longer visits and is dedicated to the dedicated and friendly staff who worked there.

They wheeled me into the operating theatre. I was wearing the back-to-front ‘gown’ that all hospitals insist on, and nothing else. I have long surmised that the idea of the gown is to ensure that you know you are naked, vulnerable and totally in the hands of the doctors.

The anaesthetist, surrounded by masked nurses, was in the middle of a joke about being so forgetful that he left home without any underwear. It was the naked truth, he insisted. Even though the sedative they had slipped into me was already pulling me down into unconsciousness, I remember offering him my boxers, seeing that I had no need of it at the time. I had no idea what went on behind the masks, so I could not judge the reaction to my offer. At the same time, I thought that masks were a good idea for occupations like surgery and bank robbery. They guaranteed anonymity and freedom from recognition if things went wrong. That was not a comforting thought.

The anaesthetist came over to me and said jokingly, as he waved a hypodermic, “I am going to give you a little Viagra here.”

Just before sinking into complete oblivion, I remember telling him, “In which case, please don’t put me to lie down on my stomach.”

As the surgery progressed, instead of my whole life flashing before me, what happened is that a string of ‘doctor’ jokes went through my head.

Like the one about the doctor who told the patient she had acute appendicitis and she blushed saying coyly, “You really think so, doctor?”

There was the woman who told the doctor that her husband thought he was invisible. “Tell him I can’t see him,” the doctor snapped. “Next.”

There was the doctor who told the patient, “There is no specific cause for your complaint. I think it’s due to drinking.”

“In that case,” the patient said, “I’ll come back when you’re sober.”

A shopkeeper whose son had swallowed some twenty-five cent pieces called the hospital to find out about his son’s condition. “No change yet,” the doctor told him.

Then there was the doctor who failed as a kidnapper because nobody could read the ransom notes.

There is also the tragedy of the man who came home from a visit to the doctor looking very worried. When his wife asked him what the problem was, he explained that the doctor told him that he would have to take a pill every day for the rest of his life.

His wife shrugged, “So what? Lots of people have to take a pill every day their whole lives.”

“Yes,” the man said disconsolately, “but he only gave me four pills.”

At some stage my mind brought up the fact that surgeons absent-mindedly leave bits and pieces of equipment in people. According to the Mammoth Book of Oddities, Dr Hector Vasconcelos from Trinidad left surgical gloves, a surgeon’s mask and two surgical instruments inside his patient’s stomach. In fact, between 1962 and 1979, a legal insurance society in Britain reported 946 cases involving leaving swabs, instruments, needles and other paraphernalia inside patients after their operations. The leftovers have now reached about 4,000 a year.

At the Petrotrin hospital, a ‘freelance’ ENT specialist left a bandage in my wife’s sinus after surgery and had the gall to demand money for the second operation to take out the bandage.

WHERE IS MY HAT?

There is a story about a patient who had just regained consciousness and heard other patients on the ward talking about surgical errors and the forgetfulness of surgeons.

“They even left a swab in one of the patients and they had to reopen him to get it out,” one said.

“Yes,” said another, “I heard about that. There was another patient with a scalpel in him.”

At this stage, the surgeon who had performed the operation looked in through the doorway and asked, “Has anyone seen my hat?” and the patient fainted.

A hat was at the centre of another celebrated medical incident. A man bought a hat and afterwards complained that whenever he put it on, he heard music. This became so annoying that the man went to the doctor with his problem. He explained the problem to the doctor who then took the hat, examined it thoroughly, and then took it with him into another room.

Returning after a few moments, the doctor told the man, “Now try on your hat and tell me if you hear anything.”

The man put on his hat and his face broke into a broad smile of wonderment and satisfaction.

“Astonishing!” he exclaimed. “The music’s gone. What did you do?”

The doctor looked at him smugly and said, “Nothing much really. I merely removed the band.”

Something like that happened to a man who could not get songs like Delilah, Green Green Grass of Home and I’ll Never Fall In Love Again out of his head.

When he complained about the problem, his doctor replied, “We call it the Tom Jones syndrome.”

“Is it common?” the man asked.

This was in my head as they wheeled me in again for a second round of surgery in a relatively short time. The same anaesthetist was there holding out a wicked-looking hypodermic.

“Just a little prick,” he said to me.

I wanted to say, “I know that.” However, I didn’t want any complications with or from him.

“Shut up! Shut up!” my mind yelled in alarm. Just before I sunk into merciful oblivion, I could hear myself say, “Story of my life.”

Tony Deyal was last seen saying that after surgery, he kept seeing Mickey Mouse, Donald Duck and Goofy in front of his eyes. It turned out to be a Disney spell. Email feedback to columns@gleanerjm.com