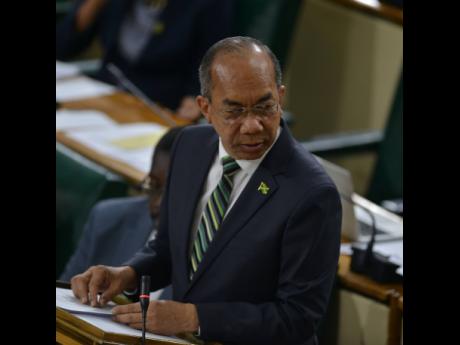 I once thought Parliament was the forum where there would be ideas about all aspects of governance for Jamaica, where stories about people’s aspirations would be told, debate sharp, reasoned and sometimes light-hearted, difficult issues contested thoughtfully, and, at the end, laws made which would try to benefit the common good. The proceedings ought to encourage citizenship interest and education, with the public given access to participate as often as possible.

There should be no apologies for idealism, but, of course, Parliament does not work that way. The mood, verbiage and vote are indelibly dyed green and orange. Take for example what is going to happen between last week when the sectoral debate began and the date in July when the House rises for the long, long summer break.

At each sitting, a government minister will give an apologia for his or her stewardship, barely, if ever, related to what was said and promised last year and full of encomiums to the governing party and the incomparable leader. The minister speaks first, almost never within the allotted time but always with an eye to catch the afternoon news cycle. Projects and promises frame the monologue, spiced with slights directed at whoever is the brain-dead opposition. The pattern never varies.

Occasionally, there can be some amusing theatre as the imported crowd in the gallery must be tittivated and the applause chorus on the bored-looking back benches kept diverted from addiction to their cell phones. Then there are the hecklers across the aisle whose effort is to deconstruct and distract from the presentation. Afterwards, there is the ritual standing ovation, no matter the quality of what had been said, and the glossy printed copies are quickly discarded.

By now, it is probably after 4 p.m., and all this is followed by an opposition spokesperson or two, usually speaking to a reduced press gallery and depleted members’ benches as everyone’s attention span dwindles. Such presentations will seldom get much coverage and will be interrupted by continuous barbs of, “Who you fe talk?” or “Why yu nevva do dat when yu was in powa?”

The minds never meet, the ideas never really contend, and respect for contrasting opinions is seldom accorded. The process of our ‘jacket’ model of Westminster presumes that the Parliament of the people is no more than, at best, a sounding board, at worst, a rubber stamp for the executive. The people get what the Government wants them to get; the common good, the direction of the budget, becomes whatever the ruling party and, in effect, its leader wants it to be.

The process has turned the underlying democratic philosophy on its head. Cabinet is supposed to be the executive committee of Parliament, not the other way round. Think about it. Half the electorate does, not vote, the other half divides in two and the entire sway of governance, bar a few very important things, ends up being decided by the representatives chosen by a quarter of the participating electorate, or one-eighth of the registered adults in the land.

The sectoral ‘debate’, so called, has squeezed out the constituency debate which used to take place. Then at least, a member could raise local issues before lawmakers, ministerial spenders and the public in an effort to get helpful reaction. Now, all you can do is to approach a minister or bureaucrat personally and beg. That cannot be right.

When we resume in September, there will be a raft of government business which will further squash the prospect of broad policy issues being timetabled. I have more than 20 of these on the Order Paper, all of significance for national direction. Despite the House leader’s sympathy, not one has been given time to even start for almost a year.

Standing House committees sit “ad-hocly” (to quote the late O.T. Williams). In a lumbering but important fashion, the Public Accounts and Public Administration and Appropriations committees react to crises, scandals and auditor general’s reports. The Human Resources and Social Development Committee will be tied up with the emotive abortion issue for months to come. Not much has been heard from the vital Economy and Production Committee lately. Similar slow outcomes describe the few joint select committees.

The parliamentary commissions and the reports of public companies get no organised scrutiny, leaving huge gaps for waste and corruption to prevail. I am surprised at the high levels of confidence recorded by business and consumers when the ultimate forum of taxation and governance operates so ineffectively. Good for autocrats in power; bad for democrats and libertarians.

So where is the deep thinking about statecraft in Jamaica done? There should be a standing committee on constitutional reform which considers as its first task the reform of Parliament.