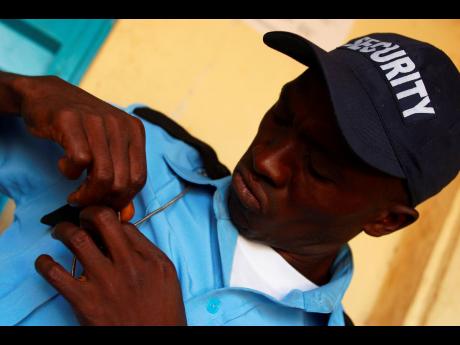 People habitually disregard the law and disenfranchise others because they reasonably believe they can do so and get away with it, and the players in the local private security industry are no different.

Owing to a lack of effective policing within the industry, opportunism and greed have had an adverse impact on the welfare of the guards. Alas, only when things have really begun to hurt the major players do they ‘cast the first stone’.

The recent revelations to the Public Administration and Appropriations Committee of Parliament (PAAC) about the underpayment of security guards was more to do with the undercutting of competitors’ rates and losing out on contracts. Other, more pertinent issues abound, namely quality controls throughout the industry, the training and certification of guards, and the adequacy of existing laws and regulatory activities.

With an estimated 23,000 guards employed within the industry, and with crime remaining a growing concern nationwide, this industry is not likely to diminish any time soon. In fact, indications are that more, largely unscrupulous players are emerging because there is ‘easy’ money to be made, given that the operating environment allows for creativity in the application of the law and the maximising of profits, albeit at the expense of guards.

The Private Security Regulation Authority (PSRA) is legislated to regulate the industry, which should see the agency undertaking activities such as the administration of licences and the monitoring of the operations of private security companies. However, truth be told, their focus has been on revenue generation rather than on the quality-assurance aspects of the industry.

Add to this, the repeated failure of the PSRA to put forward meaningful proposals to amend the existing laws, a failure often attributed to the stymieing of such initiatives by self-serving industry players appointed to successive PSRA boards.

There has not been any meaningful monitoring of the operations of any security company. The usual excuse has been a lack of inspection and audit resources, all the while giving room to unscrupulous individuals and fly-by-night entities to operate on the fringes of the law.

The other excuse, which is a matter of interpretation, is that issues that affect the terms and conditions of employment of guards reside with the Ministry of Labour rather than the PSRA. But then, what is there preventing a joined-up approach to better serve the constituent 23,000-plus guards? The PSRA is legislated to regulate the industry, not hide behind excuses.

The law calls for guards to be trained according to a prescribed syllabus, proof of such training to be by way of certification from an approved security trainer. However, the PSRA has no quality-assurance mechanisms in place to verify the quality of such training. The end result: certificates for sale and poorly trained guards galore.

As it relates to the granting of licences, the law also speaks to the disqualification of individuals who have been convicted for certain crimes in the 10 years preceding their [initial] application, a requirement that also applies where annual renewals are concerned. Whereas the requirement is for police records to be submitted during initial application, there is no such practice governing renewals. The explanation: the security companies have objected because it is too costly to be done on an annual basis.

While it is easy and often convenient to vilify one side or the other, I dare say that the ills of the industry remain unaddressed because of inertia and self-serving interests on both sides, regulatory and participatory.

Unless meaningful remedies are implemented forthwith, nothing much will change, and with disgruntled and unvetted guards abundant, consumers had best be careful who is guarding their business or home!