Verona Antoine-Smith | No ‘bar’ too high for KC 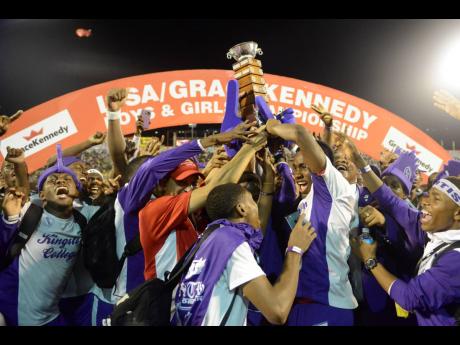 Every major prediction leading up to the 109th edition of the Issa/GraceKennedy Boys and Girls’ Athletics Championships had one projection in common: The top three schools on the boys’ side would be Calabar, Kingston College (KC) and Jamaica College. It was also predicted that the victors would win by a very slim margin. However, when asked to make the call, most sports analysts and reporters gave Calabar the edge.

One such reporter, Jordan Forte, suggested that the victory would be so close that maximising the point advantage would come down to a test of coaching strategies, including injury management.

TVJ’s Oral Tracey also conveyed his doubt of a KC victory when he jested that the dethroned Digicel Corporate Area champions (Calabar) were tricking the public at the development meet. He predicted that Calabar would win Champs with over 50 points.

Barring Dwayne Extol’s prediction, there was always some amount of reservation, which served to distance another Champs victory from KC despite the team’s obvious depth and sterling performances at successive development meets. The most forthright prediction of a KC victory emerged from within their own fraternity of coaches, athletes, sponsors, parents and teachers, alumni and, of course, diehard supporters.

Last year, during Calabar’s post-Champs interview, Principal Albert Corcho expressed contentment in their accomplishment of seven straight victories and indicated that “next year, it will be number eight”. Not only did he predict another victory; he confidently stated that Calabar would maintain their dominance in Champs for the next two years. But little did he realise that while they had prematurely started to aggregate, KC was quietly musing “fall seven times, stand up eight”.

Indeed, KC waited more than seven years for their 32nd win, but the proverb is no less instructive because a defeated team must continue to plan for success by critically assessing their performance, identifying the areas of concern and implementing the necessary changes.

Planning for success must also cater to the provision of a psychologically motivating environment, which is crucial to training and competition.

Early in the school year, lead coach Leaford Grant set the tone for the team when he sold them his vision of victory and got them to buy in.

Clearly, both arch-rivals went into the competition with one goal in mind, victory.

In a championship, every team attracts the attention of its fans and opponents. However, the purple and white brand has an exceptional appeal; they are extremely loved by their fans and closely monitored by their opponents, but four can never seem to escape the ire of their detractors, who will always root for their opponents or, better said, “Any other school but KC”.

Fortunately, the team had the unwavering support of the fraternity. Win, lose or draw, KC faithfuls will always remain jubilant and supportive. It was this aspect of the KC culture that mirrored the team’s indomitable spirit, to the extent that each athlete kept going to the very end despite predictions of defeat, the ire of the naysayers and the determination of the defending champions.

Team captain Tarees Rhoden also exemplified this indomitable spirit in the way he commandeered his team. He was commended by his peers for his stalwart support and captaincy. They indicated that he was integral to the team’s success. Working closely with the coaches, he helped to set a standard of discipline for the team and ensured that each athlete was committed to task and played his role. Accordingly, he motivated them using various strategies and reprimanded them when warranted.

Embracing the KC dream and considering the marginal victory that was predicted between the two arch-rivals, old boys O’Shane McHugh, Nigel Grandison and D’wayne Williams along with tenth -grader Hasani McLeod, stepped in to further drum up support for their alma mater. They converted the predictions into a musical declaration of victory, Lead d em o ut. The song emphasised the superior quality of the athletes and unequivocally declared that the Mortimer Geddes trophy was going back to North Street.

Below are some highlights:

In the 110m sprint hurdles, KC seized a quinella in Class 3, with Ra-John Gray taking gold. In Class 2, St Jago got a quinella, with Vashaun Vascianna taking gold. In Class 1, the bar was raised as KC got another quinella when Wayne Pinnock shattered record holder Dejour Russell’s (Calabar) time of 13.10, lowering it to 13.06. Akeem Cargill was second. The 400m hurdles proved KC’s intent to ‘lead dem out’ when they got yet another quinella in Class 2.

Lastly, a golden run from KC’s Class 1 Romell Plummer added significant points to the tally. Hurdles accounted for 64 of KC’s record tally of 395.5 points. In the long jump, Calabar easily won both Classes 2 and 3, while KC secured Class 1. Calabar also won the pole vault (open). The bar was not beyond reach in the high jump as KC landed in gold for all three classes.

They said the odds were against them, but clearly, KC had embraced victory in spirit long before they took to the tracks.

Unsurprisingly, predictions of a Calabar victory did little to dissuade them but instead became the impetus for them to ensure an outcome of their own liking.

In his post-Champs interview, when asked what had made the difference at Champs 2019 for KC, coach Grant responded, “we had planned for Champs, the opponent. And we knew what we could do. We knew how to strategise around getting all these points. So when we heard things like we’re going to lose by 50 points, we looked at exactly what we had to do”, and, needless to say, they modified their strategy.

Besides the scheduled events of the five-day championships, KC had an unscheduled event to complete. It was another bar to clear, one which was raised very high – C-bar themselves. They were the seven-year-straight defending champions with a history of dominance and an unrelenting team captain, Christopher Taylor. They came into the championships as favourites, and they came to win. But KC, the school pitted against every other school, went out there and won the championships by surpassing the utmost and highest bar of them all.