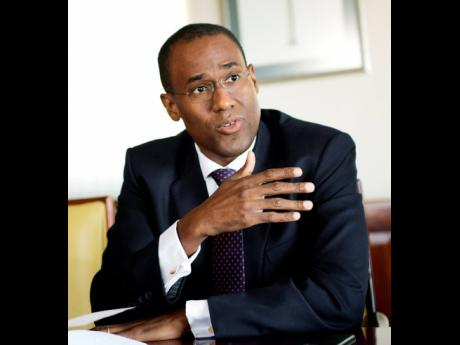 Every sovereign country has to decide and implement for itself the monetary and exchange rate regime it wishes to have and that best suits its circumstances. There are a spectrum of options, each with pros and cons, and each with a set of companion measures that would be required for its well functioning and maintenance.

More than two and a half decades ago, after much debate and at the urging of local business organisations, in particular the Private Sector Organisation of Jamaica (PSOJ), Jamaica decided on a liberalised floating exchange rate regime.

The economic context in which, and the inappropriate policy choices with which this has been pursued over much of the last 27 years, however, has had Jamaica bedevilled by chronic macroeconomic instability and structural weaknesses. In vicious loops of cause and effect, this has bred high inflation, low growth, high debt, high unemployment and persistent devaluation.

Through pain and sacrifice, Jamaica has finally been able to implement and pursue fiscal, monetary and other structural reforms designed to tackle our experience of chronic instability. Through fiscal discipline, we are reducing our debt and through monetary and exchange rate adjustment reforms, we have restored our external sustainability.

These reforms, and these unprecedented economic results, have taken place in the context of a floating exchange rate regime. Had our exchange rate environment been different, we would have had to employ an entirely different set of policies. For example, the fiscal adjustment would have been, and would continue to be, much harsher.

Any serious thought of abandoning Jamaica’s floating rate regime for a peg would require an abandonment of our economic and monetary framework, which would cause great dislocation and entail great costs. It would introduce uncertainty and instability and it would reverse Jamaica’s economic gains, which have delivered for the Jamaican people and caught the attention of the world.

For the perceived advantage of certainty, a fixed exchange rate regime, or any of its derivatives such as a peg, requires substantially more foreign exchange reserves than Jamaica currently has. These would need to be accumulated with dislocating impact and at great cost. Without sufficient reserves, a fixed rate or peg would require exchange controls/restrictions of some form to assist in maintaining that peg. Also, such a regime would confine policy adjustments to fiscal measures, thereby requiring harsher austerity.

As a result of these realities, the Jamaican consensus has been to improve on what we have and make our floating exchange rate regime work.

Our aspirations and destiny of economic independence can only be maintained if we can pay our external bills as they come due, in good and bad times. This requires us to have sufficient foreign exchange reserves in our central bank. Every one of the 15 times that we have turned to the International Monetary Fund (IMF) since 1973 have been in some way related to the fact that we have had inadequate foreign exchange reserves.

One of the consequential inadequacies of our attempt at a floating regime over much of the last 27 years has been that the currency has largely moved in one direction, and consumed copious amounts of reserves to artificially restrict movements to 10 cents and 15 cents daily.

It is not difficult to see that, without pronouncing on the merit and context in which those market sale operations took place, such sales from our reserves at that level are simply unsustainable and incompatible with the objective of economic independence.

With the implementation of various rounds of monetary reforms in 2017 and onwards, the central bank footprint on the market has reduced substantially and this has ushered in a new era of two-way currency movements, larger daily movements and long elusive reserve adequacy.

Our net international reserves, at over US$3 billion, are at the highest levels in our history. In addition, in 2018, our central bank was assessed to have adequate foreign exchange reserves for a floating rate regime, with an extra buffer. Jamaica has not, in decades, if ever, had such an assessment of foreign exchange reserve adequacy.

This is an achievement to protect with all that we have. Our foreign exchange reserves provide the foundation for the macroeconomic stability that has delivered robust job growth and the highest employment levels in our history.

Our foreign exchange reserves represent a strategic asset that belongs to ALL Jamaicans, to be used in times of dislocation in the external environment or in disorderly market conditions.

The FX market sales from financial institutions to their customers was over US$7 billion in 2017 and 2018, and the banking system has over US$3.4 billion in foreign exchange deposits.

However, having said all of the above, there is still a considerable amount of work to do. The foreign exchange market remains thin and information on activity is available only historically. This means that individuals and companies sometimes make transaction decisions in the dark, allowing for avoidable profit opportunity. Absence of information compounds the propensity for irrational behaviour and accentuates volatility, which needs to be better managed.

Financial institutions, foreign exchange traders, businesses and anyone with an interest need access to real-time foreign exchange pricing information. Businesses also need access to hedging instruments that help them manage their risk exposure in the best way they see fit. There also needs to be greater education on how to live and conduct business in a world of FX price change.

While the Government has a role to play, so does the private sector. The plethora of trading platforms that exist that support commodity trading around the world were not implemented by any government. The pricing discovery innovations of Bloomberg and Reuters and their competitors were not implemented by any sovereign authority. Instead, entrepreneurial-minded individuals, institutions and societies innovate, with the support of Government, to solve problems.

We all, therefore, have a role to play. I will be advocating for the central bank to accelerate the process of market deepening, to improve market intelligence capacity, and to hasten the introduction of a trading platform that adds transparency and assists in greater price discovery. I will also be encouraging the financial and non-financial private sectors to innovate and to realise the power they have to implement collective systems, with Government support, to improve their own circumstances. I will also encourage greater capacity development in the private sector through investment in skills and other training.

Together, Jamaica has made tremendous advances. These are worth protecting, even while we continue to improve where we need to.

n Dr Nigel Clarke is minister of finance and the public service and MP for St Andrew North Western. Email feedback to columns@gleanerjm.com.