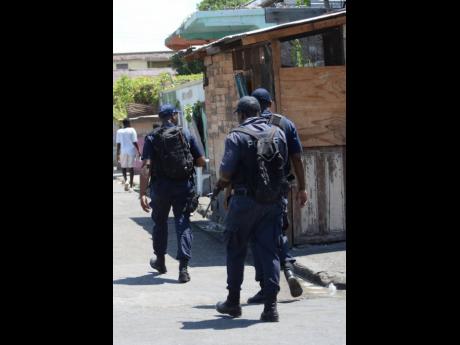 Jermaine Barnaby
Police officers, in their capacities as constables, are vested with substantial powers under the law.

For as long as I can recall, the Jamaica Constabulary Force (JCF) and its members have been perceived as being manifestly corrupt, and the recent shenanigans of some police officers have done little to alter that perspective. Active participation in gangs, robbing returning residents, death squads and rogue killings are but a few of the more recent reports of notoriety.

It is asinine to place one’s trust in people and organisations that are manifestly corrupt. Sadly, the overwhelming lack of trust of the police considerably benefits the criminal underworld, what with citizens being deathly afraid of sharing information with them, much less becoming witnesses in court proceedings.

Police officers, in their capacities as constables, are vested with substantial powers under the law. There is nothing more despicable and dangerous than a corrupt police officer who betrays the people of the country by abusing those powers.

Alas, corrupt behaviour has become the norm throughout the JCF and there seems to be little willingness or capacity on the part of the leadership to stem the problem and hold commanders accountable. The nonchalant manner in which some police officers go about their duties is testament to this overall lack of accountability.

Failing to address road traffic violations; using service vehicles to conduct their personal business; buttering up to politicos; unashamedly begging, if not demanding handouts; having an in-denial [Police] Federation and Officers’ Association to buffer them, all the while being supported by an array of lawyers who know no bounds in representing the guilty.

Basic abuse of position, power and privilege is the catalyst for further, more devious behaviour. However, given the proliferation of glass houses, hardly any member of the JCF is in a position to cast the first stone. As for the few that can, they face a clear and present danger from rogues who demonstrably have no qualms about permanently eliminating witnesses.

Considered from another perspective, internal coercion to commit breaches is not a rarity, given that chicanery enhances acceptance in wide circles throughout the force, at all levels. Crooked cops trust crooked cops, as they all have something to lose if they fail to watch each other’s back: show me your friends and I will tell you who you are.

BACK TO EXTERNAL SOURCES

Clearly, there needs to be a total turnaround in the anti-corruption strategy within the force. So, with such a problem on our hands, what are we going to do about it?

Well, for one ‘yuh nuh put puss fi watch butter’ and it would be foolhardy to expect serving members, under the existing dispensation, to police their own with any success. Years back, we recruited Justin Felice from Northern Ireland to head up the Anti-Corruption Branch and made notable inroads in rooting out rogues, mashing some powerful corns in the process.

Now the situation is even more dire, so back to external sources we need to go, perhaps to expand the anti-corruption role for the Independent Commission of Investigations (INDECOM) to deal with the vetting of applicants, monitoring and investigative activities and verification of annual anti-corruption returns, and holding commanders accountable.

As with any measure that is intended to whittle down the scope for nefarious activities, the Federation and Officers’ Association are quite likely to emit howls of protest, and threats of lawsuits are sure to follow. But, so what? Only the guilty need be fearful.

Make no mistake, the opportunity cost for failing to address the problem will be significant in terms of escalating errancy, lives lost and irreparable reputational loss for the force. Jamaica cannot afford the cost of an armed gang masquerading as police officers, more so at public expense. Outsource the anti-corruption responsibility.