Garth Rattray | What a blam-blam! 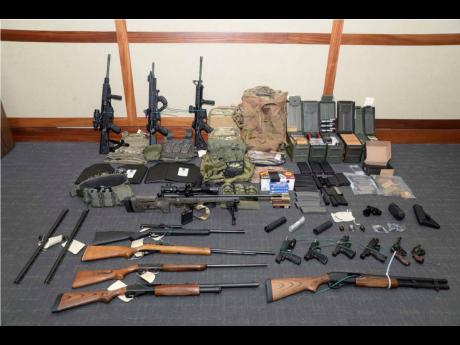 With so many guns out there, I have serious concerns with the real possibility of road rage precipitating shootings in the near future.

Media reports like “Shot and killed…”, “Shot to death…”, “Drive-by shooting…”, “Triple murder…”, “Five dead by the gun…”, and “Shot and injured” come as no surprise to any of us any longer. In spite of the frequency of shootings, several don’t make it into the news. In fact, we would be shocked if one day goes by without someone being shot.

Then there is this common story: “The victim was entering his/her home when he/she was approached by a single gunman, who fired several shots at him/her. The attacker escaped in nearby bushes… ”

Gangland hits and contract killings continue, and shootings during robberies stalk each and every one of us.

Sadly, murder-suicide shootings appear to be on the increase. And these killings are being carried out by licensed firearm holders.

When the constabulary was totally in charge of vetting applicants for licensed firearms, problems of corruption at various levels arose. The Firearm Licensing Authority (FLA) took over with the intent to end corruption, level the playing field, streamline applications, and see to training and safety issues.

People complain that some of the FLA rules and regulations are overly demanding and run licensed firearm holders into many thousands of dollars annually. Some complain that in spite of all those rules and regulations, there are licensed firearm holders who got their licences unethically. My problem with the current methodology used to grant firearm licences/user’s permits is that there has emerged an urgent need for psychometric testing of all applicants.

With so many citizens owning and carrying licensed firearms, there is a need to psychoanalyse them to see if such tests might reveal hidden violent tendencies. I know that anyone can snap. The meekest and gentlest human being, when subjected to the wrong stimuli, can snap and carry out the most heinous acts imaginable. However, sometimes, psychometric testing will reveal such tendencies and such an individual can be weeded out.

Responses to scenarios like possessive love, jealousy, the inability to just let go of someone, anger under certain circumstances, and so on could be elicited.

With so many guns out there, I have serious concerns with the real possibility of road rage precipitating shootings in the near future. Some of my closest religious female friends refuse to seek legal firearms because they tell me that they don’t know if they would be able to restrain themselves from popping off a few rounds at a certain group of road hogs and the aggressive windshield washers who harass them. Aside from that, I see where the Police High Command plans to headquarter themselves in a rough section of downtown Kingston. It’s all well and good; millions are going to be spent on planning, site preparation, construction, security measures and relocation of all that equipment and personnel. However, such crime-fighting measures only address the (rotten) fruit of crime; I would like to see similar measures being taken to educate and adequately protect our vulnerable youngsters. For every security dollar spent, one should be spent on education. For every recruitment drive carried out by the security forces, one should be carried out for educators. But that’s not happening. The (one-sided) good intensions will only end up providing more tools to deal with criminals. However, we need to stop producing criminals and provide more social intervention and more schools with better student-to-teacher ratios.