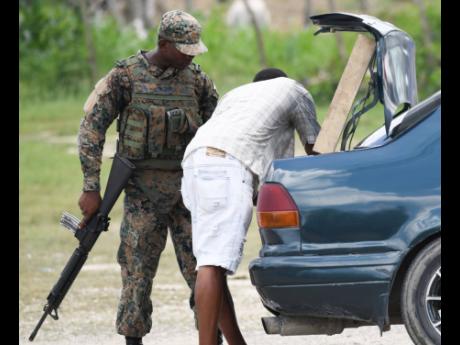 Ricardo Makyn
A soldier conducts a search of a vehicle at a checkpoint in Whitehouse, Westmoreland, which is one of three parishes, including Hanover and St James, under a state of public emergency. The security measure, which will initially last for 14 days, restricts personal freedom and grants extraordinary powers to soldiers and the police.

While the decision of the commissioner of police to disband the Mobile Reserve is a bold and necessary one, I hope this is not another nine-day wonder intended to lower public anxiety and distract us while they redistribute the damaged goods therefrom.

After all, this is not the first time a police unit has been disbanded. Remember the Eradication Squad, the Anti-Crime Investigation Detachment (ACID), the Crime Management Unit (CMU), all of which saw wayward personnel being largely transferred to other units. What assurances do we have that things will be different this time around?

Let’s face it. Basically, every time the police have established a special unit of any sort, it has resulted in embarrassment for them. Internally, poor leadership, indiscipline and prima donna-ism have been major contributors to the demise of these units, as too the externally driven strategy of deliberate pollution.

Make no mistake, the country does need highly trained and responsive police officers in a closely managed unit to take the fight to the scores of heartless gangsters plaguing our society. However, I am not oblivious to the fact that members of such units, the supposed crème de la crème, are prime targets for corruption. Alas, even the strongest may fall as they are only human.

Deliberate pollution is an even more dangerous issue. Placing tainted officers in such units by direction from the top brass and politicos, whether in leadership positions or among the foot soldiers, allows for the seeds of waywardness to be sown, and all it takes is one tainted seed to produce a tree of rotten apples.

This strategy is commonplace not just in the police force but right across the spectrum of the public service, with puppet permanent secretaries, directors and executives facilitating nepotism and other shenanigans which frequently erupt like volcanoes. Don’t forget Edu-gate and Petro-scam.

Sadly, our politicians are masters at burying their heads in the sand while runnings ah gwaan. The art of plausible deniability: see no evil, hear no evil and deny all evil.

Currently, both major political parties have members, parliamentarians, councillors and delegates alike, who were named in local and overseas circles as being inextricably linked to nefarious activities and individuals. Yet they remain, seemingly immovable and indispensable within their party structures. Why should the police not follow suit?

So, I ask again, what assurances do we have that things will be different this time around?

The police are boasting of double-digit increases in the number of traffic tickets issued since the start of the year, as compared to the corresponding period last year. They think this is a notable achievement, but does it equate to road fatalities, accidents and instances of dangerous and reckless driving seeing double-digit reductions as well? Hell no!

The ultimate measure of success in policing our roads is the degree to which accidents and recklessness are reduced, not how many tickets are issued. Their approach is akin to that of desperate statisticians, fudging figures to present a useless but seemingly attractive result.

The number of nut cases behind steering wheels who massacre the road code is constantly growing, as is their level of recklessness, evidenced by the increases in accidents and fatalities. This suggests that the police’s income-generating ticketing strategy is woefully off target.

I have always maintained that an ordinarily reckless driver is no danger to anyone if they have no vehicle to drive, so the commissioner had best tell his squaddies to stop pussyfooting around and rid the roads of the insanely driven vehicles.