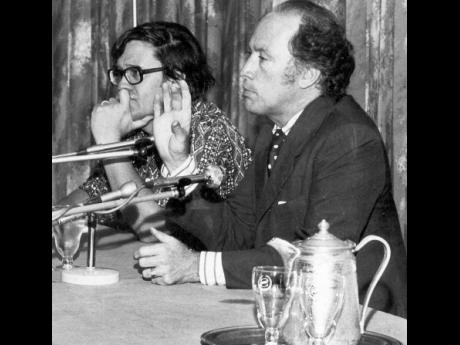 Inspired by the Memorandum of Understanding signed by the University of the West Indies (UWI) and Brock University in Canada, the Daily Observer’s Editorial for April 28 warned, in the title, ‘Take Canada for Granted at Our Peril’.  I thought that this provided an opportunity to look at the relationship between CARICOM and Canada providing some historical background. Note that this relationship, like that with other major development partners, is multifaceted and cannot be addressed fully in a single article.

The Caribbean has indeed had a very long relationship with Canada due to our common colonial ties with Britain. Canada became a British colony in 1763.  The English speaking CARICOM countries and Canada are members of the Commonwealth. Trade with Canada became more important when the USA gained independence from Britain in 1776 becoming a foreign power, and during the Britain/USA War of 1812. At both times, trade with the USA was restricted. Canada actually became an independent country, a Dominion, in July 1867.

Due to the volume of trade between the then British West Indies (BWI) and Canada, through the Maritime Provinces, in lumber, sugar, rum, flour, cod fish and other goods, the Bank of Nova Scotia, providing financial services, established a branch in Jamaica in 1889 and, thereafter, spread across the region later joined by other Canadian banks. Canada became a dominant presence in banking. . The Canadian National Steamship Company provided shipping services between the Maritime Provinces and the BWI up to 1958. Canada and the BWI had a trade agreement from 1912 which was expanded in 1925. However, by the 1930s, records indicate that Canada was rethinking this specific trade agreement. Canada by 1932, had entered into the Commonwealth Scheme of Preferences with Britain and other Commonwealth countries, for example, Australia, New Zealand and South Africa. World War II put on hold intentions to terminate its BWI trade agreement. Canada, however, was an early investor in Jamaica’s bauxite industry in the 1940s through the Aluminum Company of Canada (ALCAN) which already operated in British Guiana (Guyana).

Canada was wary of engaging with the BWI on any further trade discussions and of being drawn into governance arrangements within the region. In addition, Canada did not encourage immigration from the BWI although there was involuntary emigration in 1796 when the Jamaican Trelawney Maroons were transported to Nova Scotia. Limited immigration commenced in 1955 with the introduction of the BWI Domestic Scheme. My impression is that Canada always had to be persuaded by Britain and the USA to support the BWI. Canada neither wanted to be seen as an imperial power like Britain nor as a hegemonic power like the USA in the wider hemisphere. The country wanted to be the voice of reason, an honest broker.

In that regard, Canada did not become a member of the Organization of American States (OAS) until 1990 although it was founded in 1948.

MORE SUPPORT TO THE REGION

The Canadian Government offered more support to the region under Prime Minister John Diefenbaker (1957-1963), whose tenure coincided with the BWI Federation. Diefenbaker approved an aid programme for the BWI in 1958 of C$10 m for 5 years. Canada also donated two ships, the Palm and Maple, making it possible to create the West Indies Shipping Company. In 1962, Canada’s immigration policy was liberalized enabling migration from the Caribbean and other non-European countries.

When Federation collapsed and Jamaica and Trinidad and Tobago became independent, it is reported that President John F. Kennedy encouraged new Canadian Prime Minister Lester B. Pearson (1963-1968) to increase his Government’s aid to the WI, which he did. Canada wanted to have closer, practical cooperation with the Caribbean which was mutually beneficial.  In this regard, the Seasonal Farm Work Programme commenced in 1966, which continues today and has expanded into other sectors, fisheries, hospitality and construction. Canada also assisted with the creation and financing of the Caribbean Development Bank in 1969 and has a permanent seat on its Board of Directors. Air Jamaica Ltd was also established in that year as a joint venture between the Jamaican Government and Air Canada.

The Commonwealth Caribbean/Canada relationship significantly strengthened under Prime Minister Pierre Trudeau (1968-1979 and 1980-84). He shared similar views with leaders in the region and was considered a special friend to CARICOM. Under Trudeau’s leadership, aid to the region was increased. The Canada/CARICOM Trade and Economic Cooperation Agreement with its Protocols was concluded and signed at Kingston, Jamaica on 20th January 1979. It established the Canada/CARICOM Joint Trade and Economic Committee (JTEC). This Agreement replaced the 1925 trade agreement. During Trudeau’s third term in office in the 1980s, at the Western Hemisphere Commonwealth Heads of Government Meeting (CARICOM/Canada Summit) in Castries, St. Lucia in February 1983, he pledged to double aid to the region to total C$ 260m by 1987. Trudeau also undertook to raise issues of interest to CARICOM at meetings with the other industrial powers. Since then it appears that CARICOM has continued in the belief that they have a special friendship with Canada based on trust and support.

The Caribbean/Canada Trade Agreement (CARIBCAN), which is Canadian unilateral legislation, was adopted in 1986 under the leadership of Prime Minister Brian Mulroney (1984-1993). It resulted from another proposal by CARICOM Heads to PM Mulroney at the 1985 CARICOM/Canada Summit. The US Caribbean Basin Initiative was the template. CARIBCAN superseded the trade provisions in the 1979 Agreement. A Rum Protocol was also concluded in 1998 under PM Jean Chretien (1993-2003) which covered the trade in rum. It seems that the JTEC ceased to meet after February 1998, although the 1979 Agreement remains in force. In 2001, at another CARICOM/Canada Summit in Montego Bay, with the Economic Partnership Agreement (EPA) negotiations with the European Union (EU) looming, CARICOM Heads made another proposal to Canada. This time proposing that they negotiate a free trade agreement (FTA) thinking that a friendly Canada would be more receptive to a development oriented agreement with financial development support which would be the template for the EU negotiations. Canada did not approve the negotiating mandate until 6 years later in the administration of Prime Minister Stephen Harper (2006-2015) when the EU EPA negotiations had ended. In 2007, Harper had also announced a development support package for CARICOM of C$600m over 10 years extended to 12 years. However, he was not a Pierre Trudeau, and he was bullish on trade.

At the multilateral level, among other areas, CARICOM and Canada collaborated on culture in UNESCO, and CARICOM supported Canada’s successful bid for a UN Security Council seat in 1998, but not in 2010 when Canada was unsuccessful. This year, Canada is again a candidate for a Security Council seat.

As we know, immigration to Canada from the Commonwealth Caribbean, particularly from Jamaica, Trinidad and Tobago and Guyana, increased exponentially in the 1970s and 80s with the migrants coming mainly from the middle class and from professional and skilled groups. Today, if Haiti is included, there could be an estimated 800,000 persons of Caribbean origin residing in Canada. Jamaica has the largest number, 310,000, in 2018. With Jamaica’s 8th Biennial Diaspora Conference to be held June 16-20, Canada is an important country for strengthening diaspora relations and the diaspora could be giving more support to enhance Canada/CARICOM cooperation.

For current Prime Minister Justin Trudeau, the ways have not been so sunny. Nevertheless, Canada remains an important development and trade partner for CARICOM.  There is strong resident diplomatic representation on both sides, Canada in CARICOM countries and to CARICOM as a community, and CARICOM countries in Ottawa and with Consulates in Toronto. The region exported about US$848.1 million in goods to Canada in 2018, although CARIBCAN remains underutilized. In tourism, CARICOM countries received about 873, 000 Canadian visitors in 2018. PM Trudeau did meet with CARICOM Heads at the 2018 Summit of the Americas and the Commonwealth Heads of Government Meeting and invited CARICOM to the G7 Summit. Also, the Caribbean continues in Canada’s constituency in the IMF and World Bank. High level contacts have continued. Canada continues to provide development support to CARICOM and its Member States focusing on security, environment/climate change, gender issues and integration.  Some foreign direct investment continues to flow into the region, although Scotia and other banks have been restructuring operations. Canadian entrepreneurs have clear business interests in Guyana and some have expressed interest in the cannabis industry in Jamaica. So far, there has not been a formal CARICOM/Canada Summit and this may not happen this year as federal elections are due in Canada on 21 October 2019.

Canada has said that its long term goal in the Caribbean is to assist in building a more prosperous and integrated Community and supporting measures which promote economic growth. Thus a good relationship continues. However, over the years, in foreign policy, it seems to me that both CARICOM and Canada have, to some degree, taken each other for granted assuming continued goodwill, generosity, common interests and partnership. For CARICOM, this assumption has been particularly misdirected on trade.

Taking account of the UN Sustainable Development Goals (UN SDGs) and the importance of trade to growth in CARICOM countries, the Canada/CARICOM relationship would need to improve in trade and investment. However, in reality, CARICOM with 15 million people is not looking very attractive to Canada although there is some investor interest. Canada is currently looking at trade diversification, but it is seeking larger markets in Europe, Asia, Africa and Latin America, and perhaps within the Commonwealth.  CARICOM needs to be able to persuade Canada that there is value in exploring trade and investment opportunities. Perhaps reinstating JTEC as a mechanism for private/public sector dialogue could enable both sides to seriously explore trade and investment possibilities. The Caribbean private sector would need to be actively engaged.