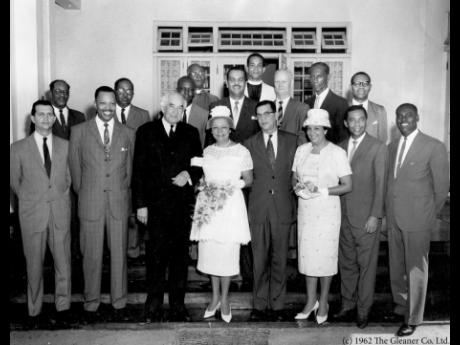 Gleaner photograph
The Bustamantes wedding party on the steps of the residence of the Roman Catholic Bishop of Kingston. In the front row from left are: Edward Seaga, Minister of Development and Welfare; Senator Hugh Shearer, Minister without portfolio, who was bestman; Sir Alexander and Lady Bustamante; Donald Sangster, Minister of Finance, who gave the bride in marriage; Mrs. C.B. Wattley; Roy McNeil, Minister of Home Affairs, Senator Joseph McPherson. In the second row from left are: Lynden Newland, Minister of Labour; Cleve Lewis, MP; Leopold Lynch, Minister of Local Government; Clement Tavares, Minister of Housing; John P. Gyles, Minister of Agriculture and Lands; Robert Lightbourne, Minister of Trade and Industry; Victor B. Grant, Attorney General. In the back row are the Rt. Rev. Monsignor Gladstone Wilson (in spectacles) and the Rev. Fr. Stanley Shearer, who performed the ceremony.

Sir William Alexander Bustamante married Gladys Maud Longbridge on December 7, 1962, in the tiny chapel at the residence of the Roman Catholic Bishop of Kingston. Present were the members of the first Cabinet of independent Jamaica. This past Tuesday, the last two surviving attendees at that wedding died within hours of each other.

Monsignor Stanley Seymour Shearer, who officiated at the wedding, died early Tuesday morning in Kingston at the home for retired Roman Catholic priests. He was 92 years old. He was the half-brother of Hugh Lawson Shearer, later prime minister of Jamaica, who was best man at Busta’s wedding.

Later that day, Edward Philip George Seaga passed away in a Florida hospital on his 89th birthday. At the time of the wedding, he was minister of development and welfare in Jamaica’s first Cabinet appointed by PM Bustamante.

Both dying on the same day 57 years later was, no doubt, a coincidence.

Both may be seen in this official wedding photo taken on the steps of the archbishop’s residence: Mr Seaga is in the front row at left, and Msgr Shearer is in the back row in the centre, next to Msgr Gladstone Wilson.

On the same day, Martin Henry, my colleague columnist at this newspaper, also passed away. He had just finished eulogising Mr Seaga live on TVJ and had left the studio, when he felt unwell, collapsed, and subsequently died. He was 61 years old – a relatively young man. He leaves a legacy of over 30 years of newspaper columns for historians and social scientists to analyse. He will be missed for his public stance against corruption and his logical approach in his writing. We were of different religious persuasions, but we agreed on many things. I regret his untimely passing.

A full and comprehensive analysis of Mr Seaga’s legacy will have to wait for some years until the eulogies have ended. His anthropological work on folk religion and rural life – which is not well known – will stand the test of time. He is best known in the political sphere, where there is much to praise, but there was also a downside.

His social and political experiment in western Kingston – particularly in Tivoli Gardens – where he was associated with some unsavoury characters, will get mixed reviews. His achievement of being the longest serving Jamaican parliamentarian is marred by the long history of bogus voting in that constituency. The wisdom of having such a situation where votes in the boxes often totalled more than 100 per cent, and where opponents could scarcely get a vote, was appreciated by his political opponents, who created their own political garrisons in response. They say that imitation is the best form of flattery.

Yet, although some of the more sordid aspects of Tivoli Gardens were copied and replicated, usually the social development aspects were not. The community cohesion and cultural life of that high-rise enclave remain an example of social engineering, which needs to be objectively studied and evaluated.

Still, at times one got the impression that the monster he created had got out of hand, and became beyond his control.

Edward Seaga was the product of the era before development had to be environmentally sustainable to be considered authentic, and so maybe we will have to be generous when we evaluate some of his more environmentally damaging initiatives. Had he been born 30 years later, he would have been exposed at Harvard University to a different development paradigm, and his fertile mind would have taken us down quite a different road.

When the history of post-Independence Jamaica is written by someone not a member of one of our political tribes, our leaders during this period will be harshly treated, for all will be shown to have feet of clay; none deserve national hero status. But despite the downsides, few will have the upsides of Edward Philip George Seaga.