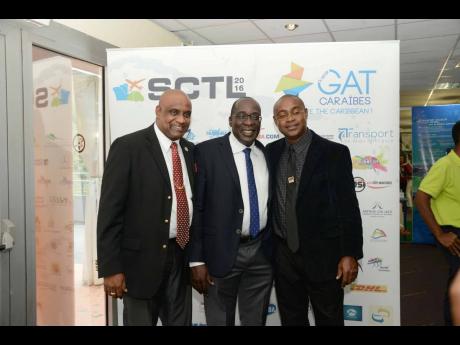 It is regrettable that the once-celebrated president of the Caribbean Maritime University (CMU), Dr Fritz Pinnock, spent years building a reputation in logistics management administration and now he’s poisoning it.

I will not go into the conflicts and controversies over the contracts of consultants Othneil Lawrence, the former St Ann North West member of parliament, or Gail Dunwell Campbell, a CMU fundraising aide.

But two weeks after telling the Public Administration and Appropriations Committee (PAAC) of Parliament that the 2017 Ruel Reid yacht party was an “industry function”, the CMU boss was back at last week’s sitting repeating it with conviction as if the more he says it, the more credible it would become.

But in the same sitting, documents provided by Pinnock’s university contradicted him, confirming that the party was, as this newspaper has been reporting, an appreciation function for Reid, the now-resigned education minister.

Still, the CMU boss coughed up a powder-solid excuse that at the previous sitting, he was not asked to clarify what he meant by the term ‘industry function’.

Then came the revelation: The CMU paid $675,000 towards the party for the then education minister. Reid had earlier been named ‘Man of the Decade’ by the Jamaica College Old Boys’ Association and was being celebrated by a group calling itself Friends of Ruel Reid.

The PAAC learned that the $675,000 was paid to two local companies: DEC Events for décor and B&D Trawling for the rental of the vessel. And the payment by the CMU was through some arrangement with the Florida-based shipping logistics company TyCarBal Associates, whose CEO is Balfour A. Peart.

According to Pinnock, the CMU owed US$8,300 to TyCarBal for logistics and ground transportation services it provided for the university’s cheerleading team which competed in Florida in January 2017. Pinnock told the PAAC it was the “perfect opportunity” to “call it a day” by paying the bills for the yacht rental and décor as opposed to the US-dollar debt. In fact, he said by doing so, the CMU saved $400,000.

Strike two! In fact, this is where I was totally knocked out.

How could Pinnock see this messy dealing as a perfect opportunity? And whose idea was it to have entered this arrangement to offset the CMU debt? From the paper trail provided to the PAAC, it appears that Pinnock was on his own when he spotted this diamond of a chance.

“Further to our discussion, I am reaching out to you for the assistance of the Caribbean Maritime Institute to provide some logistics support for this event to be a success. Support will be needed for renting an appropriate vessel to accommodate approximately 300 persons, décor and set up. Associated cost will be my responsibility. I am seeking the assistance of cadets to be a part of this occasion.”

So Peart made it clear that the cost would be HIS (my emphasis). All he wanted from the CMU boss were cadets and assistance with logistics support. But it seems to me that Pinnock and transparency are not friends, for there is no way he could have seen it as proper to write off a CMU debt by paying a man’s bill.

Ask for a discount!

Wouldn’t it have been a better option to ask for a discount of the US$8,300 bill than to pick up Peart’s tab?

In a May 19, 2017 letter, Pinnock told Peart that “further” to their discussion, he would pay the invoices against the US-dollar debt. Again, the record of the original agreement and its terms are not captured in any of the written submissions to Parliament. Why not?

Public accounting demands it, and one does not need an associate degree to see that. And while Pinnock is at it, he should consider releasing the invoices for that US$8,300 bill.

And by the way, who is this Balfour Peart?

Pinnock told the PAAC that he was a partner of the CMU who supports the university. But on his LinkedIn page, Peart describes himself as a CMU brand ambassador. Really? A brand ambassador? Who is that?

The Gleaner contacted Peart on Thursday, but he declined to speak in detail, saying the transaction was a private matter, and Pinnock has not been taking questions from the media. But we need to know what makes Peart a brand ambassador and how he came by that title.

We hope that the next time the CMU boss is called back to Parliament, he will be asked to clarify this designation, and we pray that the members of the PAAC will ask the appropriate questions.

The PAAC, it seems, is hardly curious about the dealings at the CMU, evidenced by the malnourished questions on the part of some members and the famine on the part of others.

The committee must remember that while Pinnock and other current and former public officials can decline to speak to the media, they are obligated to answer the call and questions of the parliamentary body. And it is on behalf of the country that the body sits – not any partisan interest.

- Damion Mitchell is The Gleaner’s integration editor. Send feedback to damion.mitchell@gleanerjm.com or columns@gleanerjm.com.