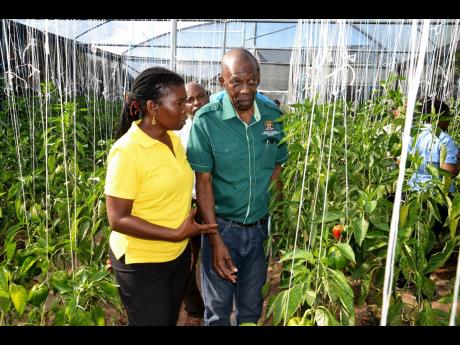 Carl Gilchrist
Marvalee Tomlinson-Russell of the Elliott Farmers Community Enterprise takes Minister J.C. Hutchinson on a tour of one of the greenhouses in Cromwell Land, St Mary, recently.

Finally, 30 months (yes, two and a half years!) after introducing a resolution proposing that improvements in education and training in agriculture and ­increased access to credit for farmers would enhance output, productivity and earnings, a few minutes were accorded at the end of last Tuesday’s sitting of the House of Representatives for me to open that debate.

As argued before, Parliament, and especially the House of Representatives, by executive design, laziness and excessive partisanship, have forfeited the obligation of being the forum for discourse of major policy. So we meet to do the bidding of the government of the day, entertain some criticism of but make little change to it, and largely waste the remainder of the meagre three or four hours we allow each week for a little more than half of the year.

Less than half the membership bothered to be present towards the end of last week’s sitting. My concern in 2016 and moreso now, is that despite all the talk and marketing about economic growth, we have not laid the foundation for that potential advance which lies in the agricultural sector.

Look at the data: agriculture comprises seven per cent of gross domestic product (GDP) and when you link it with agro-based manufacturing, the figure rises to about 15 per cent. The sector accounts for about 200,000 jobs, and has the greatest potential for increasing sustained employment and productivity, and relieving us from the current deceit of counting every window-washer and Cheez Trix vendor as being employed.

Think deeper and realise how crucial rural development is to social stability and national security. Consider, too, the high proportion and great prospect of our exports, based on raw materials from the land. Ask yourself, how else are we going to retain more that 20 per cent or so of the tourist dollar unless agriculture and agro-processing dramatically step up their contribution to the visitor industry?

In the face of all this opportunity, agriculture is projected to grow only five per cent this year, following a measly four per cent last year and a flat start so far in 2019. How can this add up to ’prassperty’?

None of the thrust we need can be achieved without the training, retraining and certification of the nation’s farmers and a new generation of agriculturists. Jamaica lost out when the Faculty of Agriculture at The University of the West Indies was sited in Trinidad, despite us having a larger land mass and potential.

But we do have the College of Agriculture, Science and Education (CASE) in Portland, which must be invested and tasked to provide the research in and training enough to at least triple agriculture’s contribution to GDP in five years and more, transformationally, not incrementally, thereafter.

Elevate CASE to full specialist university status like the Caribbean Maritime University (CMU). Task our diplomats and investment promoters to link us with every tropical agricultural faculty anywhere (Israel included), from whom we can borrow science and personnel.

From basic school up, link the Rural Agricultural Development Authority (RADA) and a new generation of agricultural science teachers to indoctrinate (verb chosen purposely) our children, that engaging with the land, producing the food we take for granted three times a day for life, must be their concern also.

It is good news that more students are sitting agricultural science at the Caribbean Secondary Education Certificate (CSEC) level and that there is a plan (but why only a plan?) to have a kitchen garden at every school, even though only 10 per cent of our grade-11 students succeed in a natural ­science subject.

Good news, too, that Minister J.C. Hutchinson (perhaps the only trained and practising farmer in the Cabinet, but still without portfolio responsibility) is delivering on his promise to place 200 farmers on Holland Estate. This should be duplicated 10 times, then perhaps the knuckleheads in planning would understand where the real value of the Bernard Lodge lands lie for national development.

And why should stupid partisanship prevent us from seeing the worth of the project Franklin Johnston was working on, to ensure appropriate certification for farmers, just like teachers, plumbers and lawyers, and so give pedigree to this profession and begin to avert the scorn and low regard which so often applies?

Tomorrow, Minister Audley Shaw, and perhaps others, are scheduled to reply on the issues of agricultural education and credit. And on this matter of financing for farming, we will return next time.